Rogers - A Flourishing Town Way Up in the Northwest (Arkansas) 1883

__________
A Flourishing Town Way Up In The Northwest,
__________
Where Three Years Ago Chickens Cackled in the Farm Yard,
----------
An Illustration of the Progressive
Arkansas of Today,
__________
A Town Where the Fruit and Tobacco Industries Thrive,
__________
And From Which Cattle, Horses and Mules Are Shipped,
__________
An Interesting Description of the Town and Its Features, the Country and Its Capabilities.
----------
Daily Arkansas Gazette, July, 1883
From Fayetteville to Rogers is between 25 and 30 miles almost due north. The character of the country through which the 'Frisco road struggles is of the most rugged and picturesque. Mile after mile the train winds in and out, straddling over deep ravines and gullies-- on trestles whose spider legs look almost too frail to support the weight of the train, but which never creak beneath their burden -- plunging through cuts whose sides rise up toward the skies, dodging about among the boulders and rocks and darting across patches of open land or through dense forests, the train at last pulls up at the station of Rogerss, Alighting before the depot, The Gazette man walked up to the best looking man on the platform and asked where he could find
A GOOD HOTEL.
"I'll take you to my own," replied Capt. Hooker, "that's as good as any." And so it is; a good hotel, good rooms and good accomodations.

Three years ago the town of Rogers was a farm yard and today it is a florishing town of nearly fifteen hundred inhabitants. The original town site was owned by B. F. Sikes, and he holds today many of the most desirable town lots which are on the market at low prices. The business street runs parallel with the railroad or rather the railroad runs down the center of the street, stores to the number of about thirty appearing on both sides. When the 'Frisco road first came through the place, though a good farming country in the midst of one of the best portions of our state, it was but sparsely settled, but soon capital and enterprise came in and continues to come, and the time is by no means distant when it will be one of the first towns of the northwest. Naturally, it would be supposed that Bentonville, which is but a few miles to the northwest, would have been injured by the new town, but such is not the case. On the contrary, Bentonville, thoroughly alive, has connected herself with the new road by a line of her own. 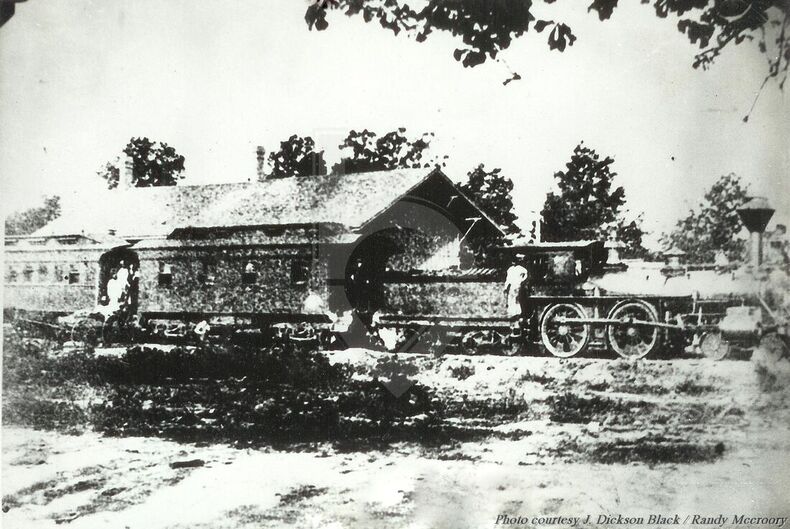 A history-making train - It was the arrival of the above Frisco passenger train on May 10, 1881, that gave Rogers a birthday.
Old No. 17 was the first to run over new tracks into Rogers. The town began with that trip.
Among the
MANY ENTERPRISES
​which may be seen in Rogers at a glance are the fruit-drying establishment of D. Wing & Bro., from Rochester, N. Y. They have two evaporators here and three in Bentonville, with which they do a big business in the fruit season. During the last one they shipped 450,000 pounds of dried fruit to the house in Rochester, of which they are a branch, and it is thought their shipments during the coming season will be much larger. 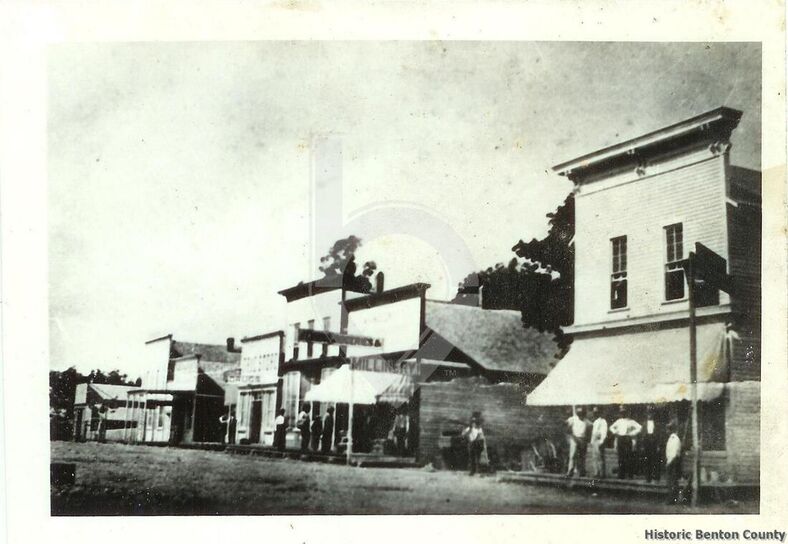 Early view of 1st Street in downtown Rogers
Huffman & Williams have a warehouse beside the track, from which they ship all kinds of grain and produce. Last year they shipped 15,000 barrels of green apples and seventy-eight cars of wheat. It is thought their shipments of chickens will average twelve coops of four dozens each week and eggs fifty cases of thirty dozens each. They also ship large numbers of cattle and hogs.

BENTON COUNTY TOBACCO
is known and appreciated all over the state, and indeed all over the neighboring states. The yield has so far averaged between 500,000 and 1,000,000 pounds per season, sometime reaching as high as 2,000,000 and never falling below 500,000 pounds, which is sold at an average price of 6 cents per pound, and sent mostly to St. Louis, Louisville, New York and Liverpool, England. The packing of leaf tobacco at this point is is done almost exclusively by Mundell & Clapp. Among the merchants of the town, although there are many who are men of nerve and pluck, there are none who can lay claim to superiority over
J. F. DAVIS,
who is doing one of the best general merchandise businesses along the line of the St. Louis and San Francisco road. His store is large and well appointed, and his stock is a good and well selected one, consisting chiefly of dry goods, and clothing, in connection with which he runs an excellent line of groceries. Mr. Davis himself is one of those generous, whole-hearted men whom no one knows but to like, and his friends are numberless.
W. A. MILLER
is a dealer, in dry goods, clothing, boots, shoes, groceries and general merchandise. His stock is large and good, and his trade heavy and increasing.
W. H. CARSE
is proprietor of one of the neatest little jewlry establisments that is often seen. He deals in watches, clocks and musical intruments, and has the run of a good line of custom.
THE BANK OF ROGERS
is one of the noteworthY featureS of the place, being a first-class institution, though yet in  its infancy. It is a private institition, run by Cooley & Felker, both good business men. 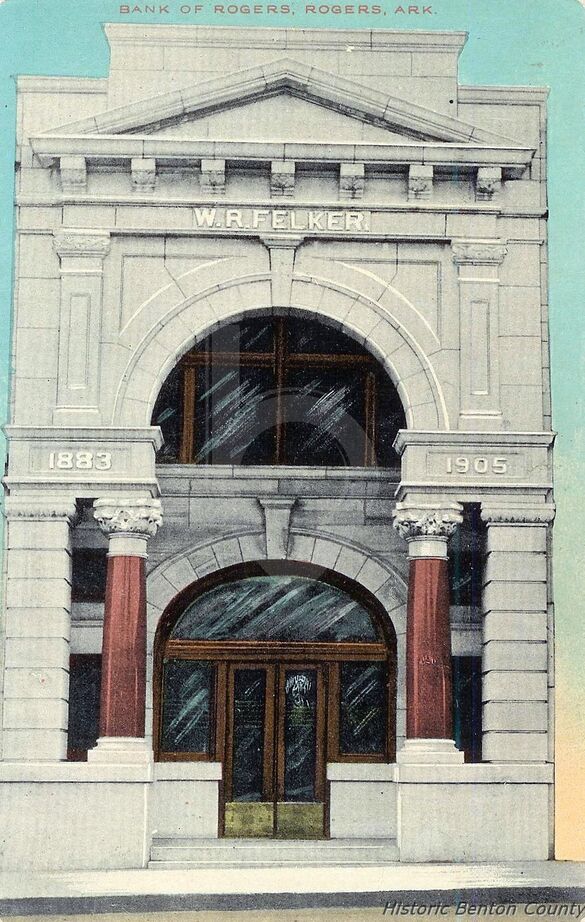 Early 1900's image of the Bank of Rogers
Among
THE OTHERS
may be mentioned H. S. Mundell, groceries; C. W. Clapp, dealer in grain and agricultural implements; Pratt & Gibbs, hardware; A. Bucklin, confectionery: Dryer Bros., hardware; C. T. Ald, hardware; J. W. Brite, with a good stock of general merchandise, mostly dry goods, boot, shoes, and G. L. Alexander, who is doing a first-class good business in the drug line, with a fine stock and an excellent trade. With men like these at the head of the list of their business houses, the trade of Rogers is bound to boom, whether or no
THE SURROUNDING COUNTRY
is of the most prolific character. The soil is of the richest quality, and the products are many in number and good in quality. There are few better apple countries known than this, and the grains grow almost without assistance. Large shipments of lumber are made yearly, and the cattle trade is a rapidly increasing feature. Mules, in particular, from this section are much sought after and bring good prices. Over 500 head have been shipped during the past two to three months.

There is one newspaper, the Rogers New Era, of which Graham & Mason are the editors and proprietors, and another one is just about to start. Among the other shipments which have been made in the past nine months are 240 cars of posts. There are four churches - Congregational, Baptist and North and South Methodist - and two good common schools.

​Surely success smiles on this place.