Andrew Jackson Russell was for many years closely identified with the advancement of the agricultural prosperity of Benton County, Andrew J. Russell was later associated with public affairs, at one time being sheriff of Benton County. As may be seen from the official position he held, Mr. Russell was held by his fellow-citizens as an able valuable worker in their interests, while his fidelity to his duties and his integrity and good sense won him the respect and esteem of the community. He was born May 14, 1860, in Bentonville, a son of James B. Russell. His grandfather, Samuel Russell, migrated from Tennessee, his native state, to Missouri, locating in Benton County, where he continued residence until his death.

Andrew's father, James B. Russell, was brought up on a farm in Missouri, and as a young man chose farming as the better means of gaining a livelihood.  Coming to Arkansas in 1859, he settled on a farm seventeen miles west of Bentonville, and was employed in cultivating the soil until his death in 1874 when but fifty years of age. He married, in Missouri, Polly J. Horton, who was born in Alabama, but was reared and educated in Missouri, where her parents had located when she was a child. She passed away in Bentonville in 1910 at the age of seventy –nine years. She bore her husband six children.

Gleaning his early education in the district schools, Andrew J. Russell selected farming as his life occupation, being governed in his choice by his early training and environments. He was proprietor of a well-kept farm near Bentonville, and was there engaged in cultivating and improving his land until 1905, when he was appointed deputy sheriff by Sheriff Pickens, deputy, and in November, 1908 was elected sheriff of Benton County. Rendering exceptionally fine service in this responsible position, Mr. Russell was re-elected to the office of sheriff in November, 1910, a record showing his popularity as a man and a citizen. Politically he was a staunch adherent of the Democratic Party.

Mr. Russell was married in Benton County, Arkansas in August 1885, to Margaret M. Brooks, the daughter of Isham Brooks, who came from Georgia to Arkansas. Fourteen children were blessed to this union. Mr. Russell was not affiliated with any organization except the Baptist Church of which he was a member. 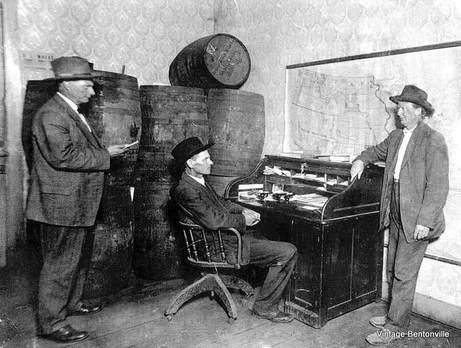 Andrew Jackson Russell is the gentleman sitting in the middle of the photo.