Bentonville Science Fair (1958)
​by J. Dickson Black
The fourth annual Science Fair was held in the High School gymnasium in Bentonville on April 4-5-6, 1958. There were over 500 projects entered by 700 students from the senior, junior high, and grade school. Forty-four students won sweepstakes ribbons on 36 exhibits and will go to on to the district fair at the University of Arkansas , Fayetteville, later this month. 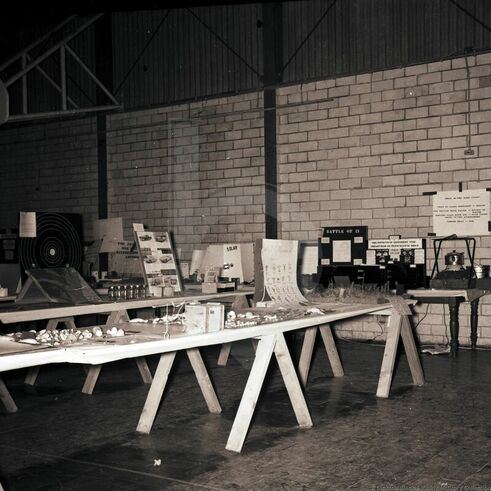 It was an eye opener to the 1500 people and students who saw it. There was nothing missed in the field of science. There were about 15 rocket exhibits showing models of rockets we have now, and some  on what they think rockets will be like in a few years. Also there were many charts on the theory of rockets. These showed firing, fuel and power. The best was the sweepstakes winner, Jack Gallimore, who is a sixteen-year-old senior. It was on testing a rocket engine and required a year of work. 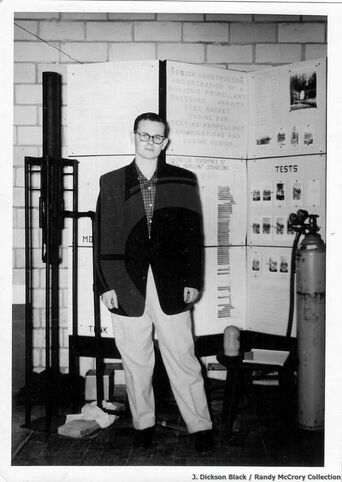 Jack Gallimore, 16 year old senior of Rt #2, Bentonville, Ark, son of Mr. and Mrs. D. Gallimore, won a sweepstakes in physics with his exhibit, Design, Construction and Operation of a B I Liquid Propellant Pressure Gravity Feed Rocket for Testing Propellant Combinations and Engine Design. He spent about a year and $60.00 in testing.
Keith Payne, 8th grade, won a sweepstake in physical science with a solar furnace which had a frame to hold a lens made of acetate and fixed so that it could be turned with the sun. The furnace could be used to cook with. He said he could cook a hot dog in ten minutes on it.

Crystallography was a sweepstakes winner for Miss Barbara Trout and Miss Lynette Gully with a big display of crystals it had taken them over two months to grow. They also had pictures of crystals taken through a microscope and drawings showing different crystal shapes. One girl, true to fashion, used her science to test face power. She had run six tests. There were also exhibits on cooking, and one on Hair-Hows Yours Looks. Next was a set-up on rocks with a machine to cut and polish rocks. Pieces of jewelry which had been made from the rock was shown.

Sara Reynolds had a colony on Mars with people constructed from radio tubes. George Craig had a town site made like he thinks we would build on the moon and use to explore the moon from. 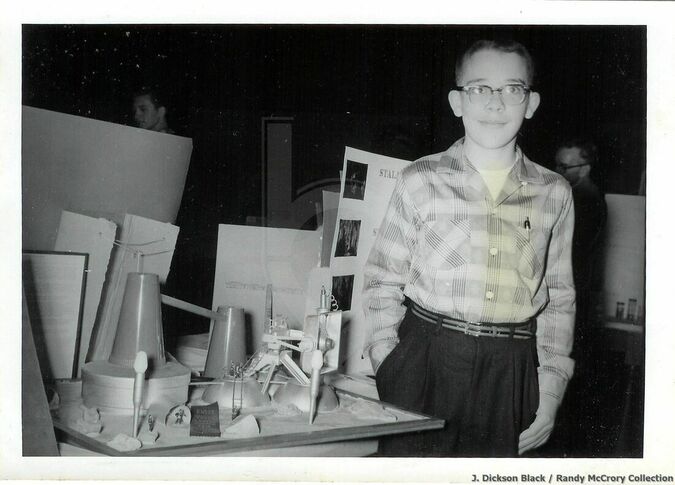 George Craig, 14 year old 8th grader, Bentonville, Ark, son of Mr. and Mrs. George W. Craig. Operation Moonbeam won George the sweepstake. It is his idea of how the first base on the moon will be built. It was worked out in a real nice model. George went to State last year with his model of a solar plant.
There were many entries in the field of electricity. The sweepstakes in this went to Mike Knott for his electrical computer. The computer was in the from of a gram. There were transistor radios, one tube radio, cigar box telephone, electric motors and theories on circuits.  For the sport fans there was an electric game in which one might pick out a ball plays. If you won, a light flashed on. 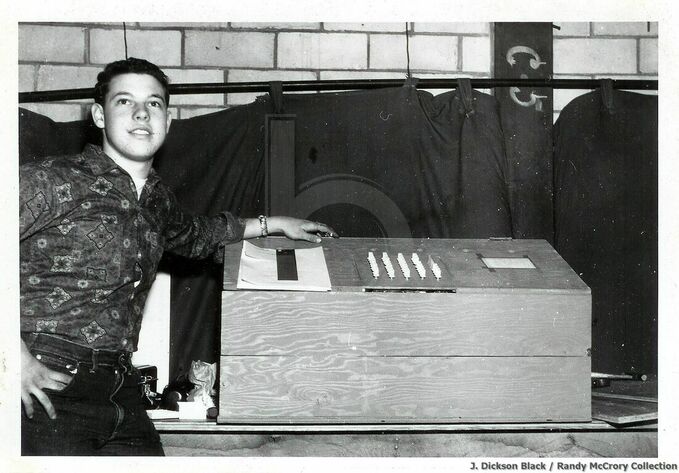 Steve Miller with his electrical computer
True to form for a farming section, there were a good many displays which dealt with farming. One entitled Cells and Tissue, Building Blocks of a Chicken showed blood cells and skin and flesh tissues on slides. Out of the Pours Health was an exhibit showing a bottle of milk and charts which explained how good milk is for the health of all. Displays on soil showed testing, use of fertilizer, contour plowing and cover crops to save the soil. Seed Germination showed seeds just planted and at different stages of growth. David Rice's Milking Made Easier was a barn operated entirely by electric. 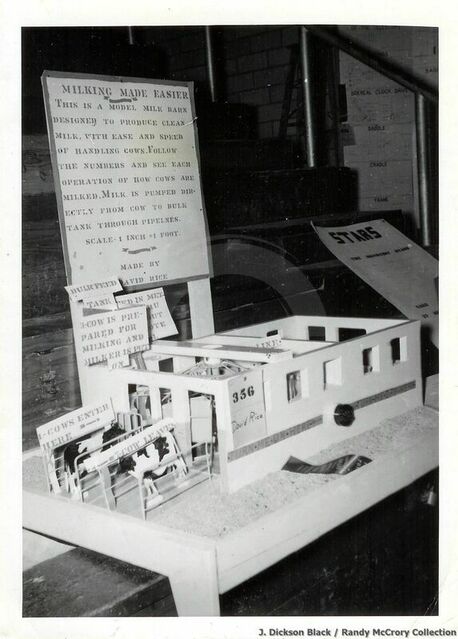 This is David Rice's Milking Made Easier and is run on electricity. With a barn like this it not only easier but a lot cleaner. The milk runs into pipes from the cow to the cooler.
Circulation of the Blood was good for ten or more displays explaining this subject. The most outstanding of these was one which showed the many parts of the body cut out of board. These parts were connected by tubes which represented veins.

The grade school had about 120 displays, some of which were room projects and some individual. There were rocks, shells, leaves, handmade maps, a prehistoric zoo, arrowheads, bark, and minerals. The display showed the interest in science which has already started in the lower grades. 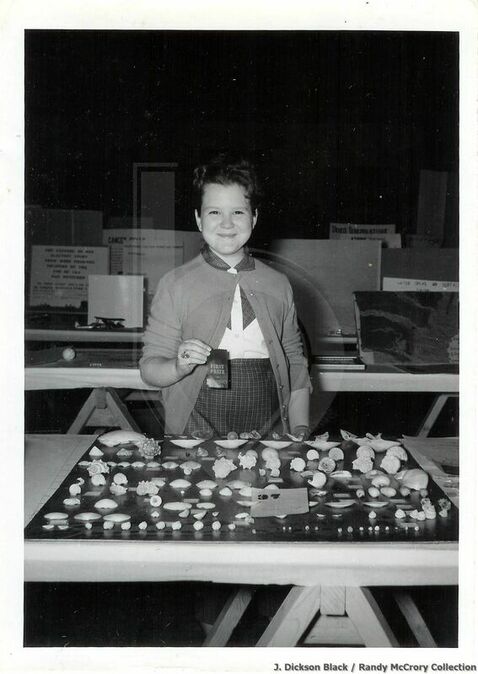 Barbara Craig, 10 years old, daughter of Mr. and Mrs. Ed Craig won first place with her display of shells. She has a very large collection of them and was glad to be able to show them.
Judging was done by a group of teachers from Rogers, Gentry, and the University of Arkansas, also Dr. Earl Gill, and Dr. Sam Morrison of Bentonville, Mr. C. W. Boss,  bacteriologist from Kraft Food Co., Bentonville, and Mr. Bill Elmore, County Sanitarian.

Mrs. Hazel M. Riddle, who has taught science in the Bentonville school for the past 21 years was the director of the fair. Four years ago, when she had the first science fair in Bentonville, there were only 186 exhibits. This fair was the first of its kind in Northwest Arkansas. She said she was very pleased with the results and the interest of the people this year. Mrs. Riddle has taken special science courses for three summers at the University of Arkansas. This was made possible by a grant from the Federal Government National Science Foundation to train teachers new and more science to teach so that we will have more and better young scientists. 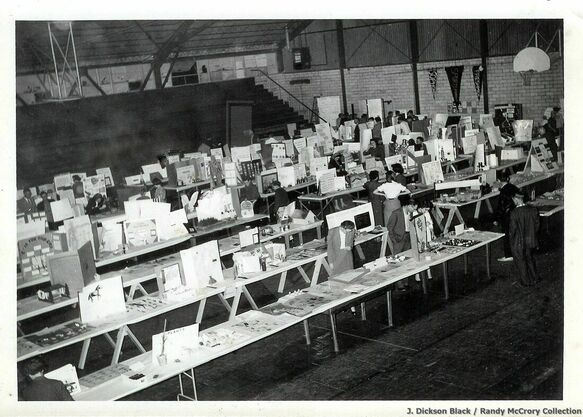 Bentonville Science Fair 1958 held in the old Bentonville gymnasium
The teacher did not help the students at all with their projects. They did the work at home or in the lab on their own time. Some nights they worked until almost midnight. But now Mrs. Riddle will help them in getting ready to take their projects to the district meet at Little Rock.

This is the first year that they have had a district meet since many more schools are having fairs this year. Each year before Mrs. Riddle has taken about ten to State. In 1956, Cleveland Boatman went to the National Science Fair with an Electric Solar System. In 1957 Mrs. Riddle went again with Jim Powell who had a model of a wind tunnel.

Mrs. Riddle said the one big idea of the fair is to get the students to do things all on their own. Some day she hopes to see some of her students be great scientists. 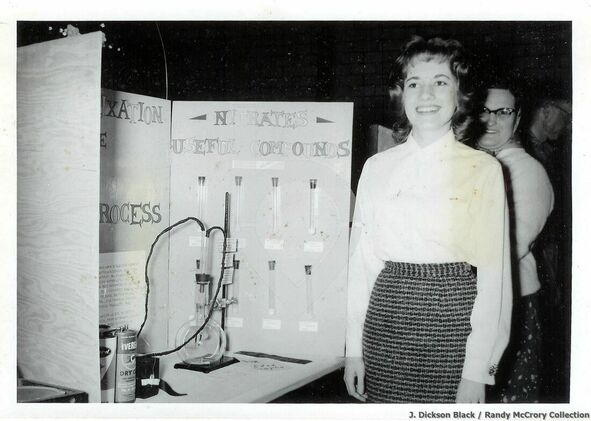 Edra Compton, 16 years old, Junior, daughter of Dr. and Mrs. Compton. This was her fourth year to enter and she took the sweepstakes ribbon with Nitrogen Fixation by A.R.C. Process. This showed how nitrogen is taken from the air. 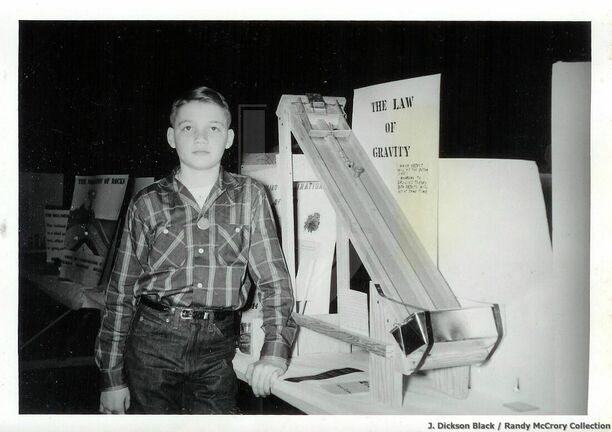 ​ James Jefferson, 13 year old 8th grader, Bentonville., Ark, the son of Mr. and Mrs. Joe Jefferson, won the sweepstakes ribbon with the Law of  Gravity proved by Galileo"s Theory. He had a tower with two iron balls, one big and one small. to prove that they would fall with the same speed. 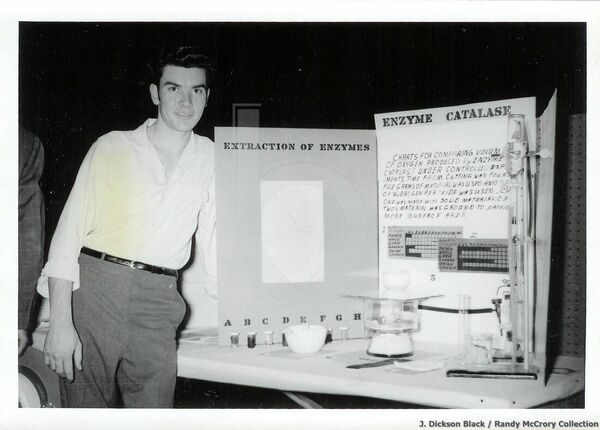 Charles Ware, 17 years old, Junior, Bentonville, Ark, won the sweepstakes for his exhibit Enzyme Catalase. He had a chart for comparing volumes of  oxygen produced by enzyme catalase under controlled experiment. He spent about 32 hours on this. 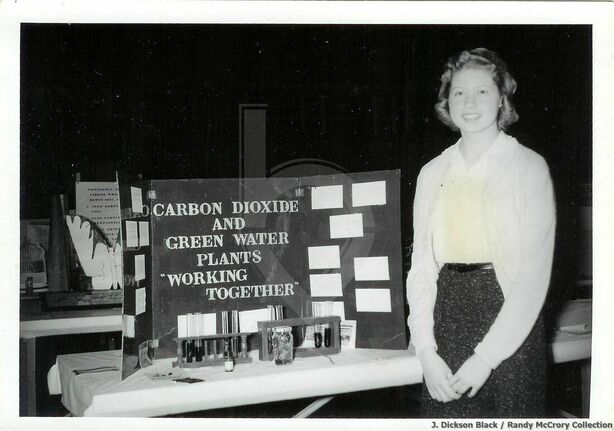 Miss Karol King, 14 years old, Freshman, Bentonville, Ark. the daughter of Mr. and Mrs. Wayne King won sweepstakes with Carbon Dioxide and Green Water Plants Working Together. showing how they got their growth from the air.
​This is her first year to be in the fair. 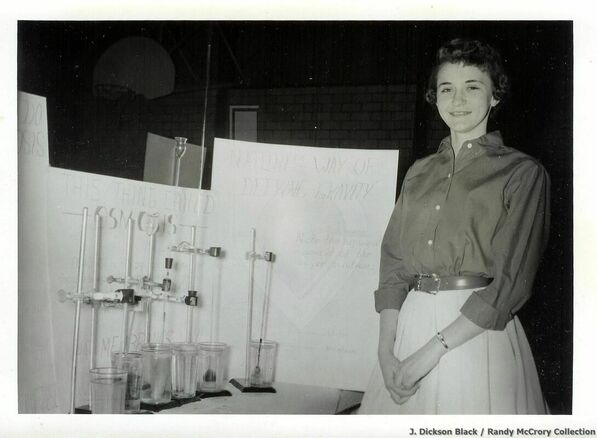 Judy Hollingsworth, 16 year old Junior, Cave Spring, Ark, the daughter of Mr. and Mrs. A. L, Hollingsworth won sweepstakes with This Thing Called Osmosis, Nature's Way of Defying Gravity. This was accomplished by the upward movement of the sap or sugar solution and is how plants get their water. Sap is shown coming up in the tubes in this picture 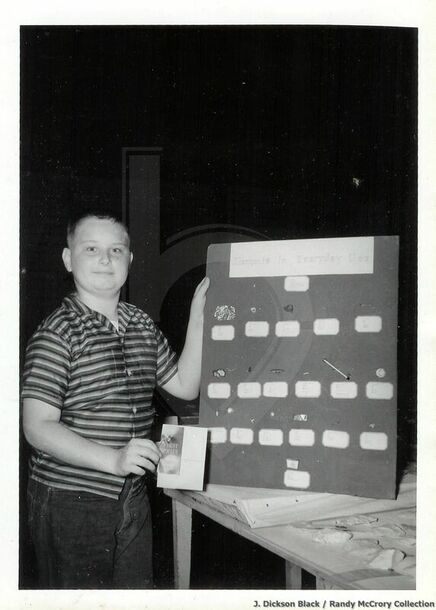 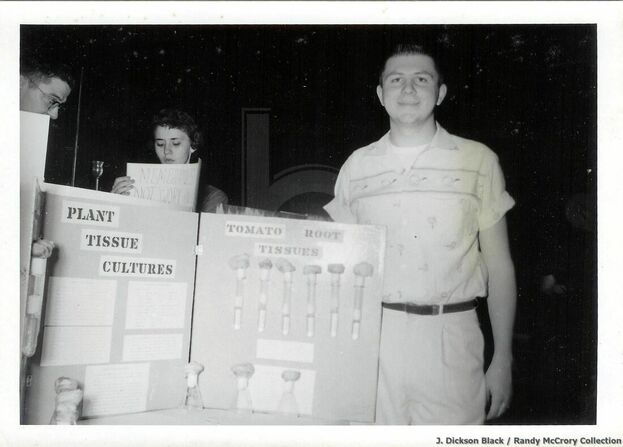 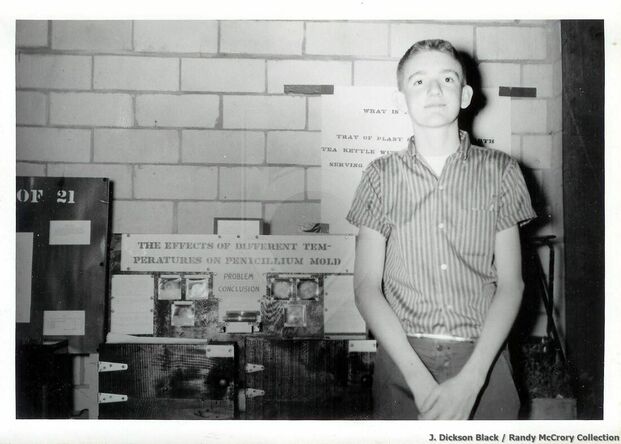 ​Charles Pratt, 15 years old, Sophomore, 507 S. E. C St., Bentonville, Arkansas, Son of Mr. and Mrs. Harry Pratt. His sweepstake winner was the Effects of Different Temperatures on Penicillium Mold. He went to state two years ago with a working model of the Grand Coulee dam. 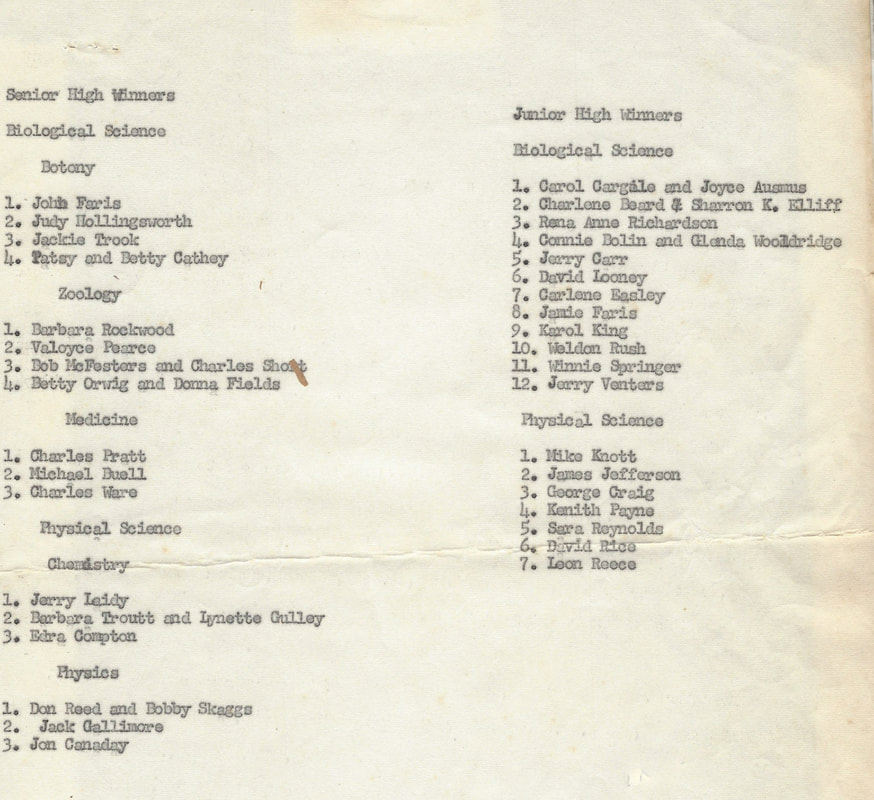 A list of all winners in the Science Fair