Three Men Killed
Two Missouri Desperadoes Get In Their Work
And Attempt to Escape but Retributive Justice Follows Swift and Sure.
The Scene in Benton County - Full Account of the Unfortunate Affair
Springdale News  -  January 23, 1891

The vicinity of Rogers, our neighboring town ten miles north, was the scene of a bloody conflict first of the week and the result is that two men were killed outright and another lies at the point of death. There were so many conflicting reports in regard to the matter that we thought we would make a personal investigation and on Wednesday evening visited the scene and the following is what we learned:-

Some two to three weeks ago two young men, aged about 20 and 25 respectively, arrived in Rogers and stopped at the home of a brother in-law named Richard McCullen about five miles east of town. They were from Lawrence County, Missouri, and their names were Nim and Harrison Sheppard. They frequently came into town and tried hard to leave the impression that they were a "tough gang", and were so regarded. Last week, Saturday we believe, they received two fine Winchester rifles -40 caliber and carrying 82 grains of powder - having ordered them through a local hardware firm, and that they knew exactly how to use them we have ample evidence. Their actions caused them to be suspected of some crime and they were carefully watched, and on Monday Ed. Wright, a town officer of Peirce City, Missouri, and A. M. Vandegriff, a deputy sheriff of Monett, Missouri, arrived in town and reported that the Sheppards were wanted in Lawrence County, Missouri, for assault with Intent to kill, they having beaten a justice of the peace unmercifully and left him for dead, his offense being that he had them arrested for disturbing church worship. In order to get a hold on them Jesse McFarlin, town marshal of Rogers, swore out a warrant charging them with carrying concealed weapons. On Tuesday morning about five o'clock Wright, Vandegriff, McFarlin, and Wm. Dalton, constable of Rogers, secured a conveyance and went out to the home of McCullen to make the arrest. They arrived at the house just as day was breaking and after a little preliminary skirmishing they proceeded, two of the gentleman going to one door while the other two guarded the other one, the house being a small box one with only two doors. The rapped for admittance, and Mrs. McCullen on the inside was heard to say "here they are boys, you know what you have got to do," or words to that effect. The door was pushed open when the Sheppards commenced firing, the complement being returned by the officers. Dalton was shot and instantly killed, the ball entering his body just above the left nipple and out his shoulder, going entirely through him. Nim Sheppard, the oldest one, was shot in the hand. The officers soon beat a hasty retreat, and as they ran Vandegriff received a shot through the brim of his hat and McFarlin one in the heel, neither doing any injury, but when about sixty yards from the house Wright was shot, the ball entering just at the forks of his legs and coming out on the other side. He was taken to town and placed under the best of medical attention and at ten o'clock Wednesday night was still alive, but here are no hopes of his recovery. [He died a few days later.] Dalton was left where he had fallen until an ambulance could be secured from town when all that was left of the brave officer was returned to his home, where a broken-hearted wife and two little children awaited his homecoming. But, ah! such a different home coming from what they expected. Dalton was buried yesterday by the Masons and Knights of Pythias of Rogers, of which organizations he was an honored member. His wife and two children are receiving the ministrations of many kind friends over their great loss.

A posse was soon organized in town to hunt down those two desperate men who had defied the most scared laws of both God and man, but when they arrived at the house of the McCullens they had fled. Searching parties went in every direction but nothing could be heard from them, but McCullen and his wife were arrested and lodged in the county jail at Bentonville, charged with being accessories to the crime. In the afternoon parties who visited the McCullen house found the two Winchesters, the two fugitives having returned there at noon for their dinner and left them. Fastened to one gun was a note, written in a scrawling hand with pen and ink, and on a blank leaf torn out of a memorandum book, which read about like this: " Nance got it in the neck," Nance being the name of the gun and on the barrel of the gun, close to where it would be held by a person in the act of shooting was an indenture, showing that this gun was used by Nim Sheppard, who was shot in the hand. On the other gun were the words, "Laura Ann gained the victory," and it is to be presumed that this is the gun that done the killing. On each gun were instructions to Mrs. McCullen as to how to dispose of them.

It was thought that the fugitives had taken to the hills on the river but late Tuesday afternoon word was brought into town that they had been seen a few miles north near the railroad. A crowd was soon organized and at about half past ten they boarded a freight train, as it was thought they would attempt to steal their way out of the country on it, and the sequel shows this supposition was entirely correct. Part of the crowd was in the caboose, some were in a box-cars, while Mr. Stringfield was aboard the engine. While the train was slowing going up a steep grade about one and a half miles this side of Garfield the two desperados attempted to board the train, selecting, as luck would have it, the box-car in which were three of the pursuing party. The first one, Nim Sheppard, got well in the car before he discovered anything wrong and when he raised up was looking down the barrel of his old "Nance" in the hands of Mr. Tom Blackburn, and at the command of hands up he obeyed with alacrity. Harrison Sheppard hearing the noise in the car took the alarm and turned to flee when he was shot at by Will Oakley, but it being dark he was unable to tell whether or not he hit him. No one on the train, except those in the boxcar, knew what was going on, and the train did not stop until Seligman was reached. There the party boarded a returning freight train and arriving at Rogers before daylight, the prisoner was taken to jail at Bentonville.

Search was made Wednesday morning at the point where it was thought Harrison Sheppard was fired upon, and he was found lying face downward dead, with three buck shot in his left shoulder, attesting the markmanship of Mr. Oakley. The remains were brought down on the passenger train Wednesday morning. A coroners inquest was held in the afternoon and the body was turned over to the undertaker to be buried at the expense of the county.

And thus ended one of the bloodiest and saddest affairs of the kind ever occurring in N. W. Arkansas. The excitement at Rogers was intense but everyone seemed to be anxious for the law to take its course and that no violence be done.

Nim Sheppard, we understand, claims that his dead brother done the killing. There seems to be no doubt, however, but what he is equally guilty and will expiate his crime at the end of a hangman's rope 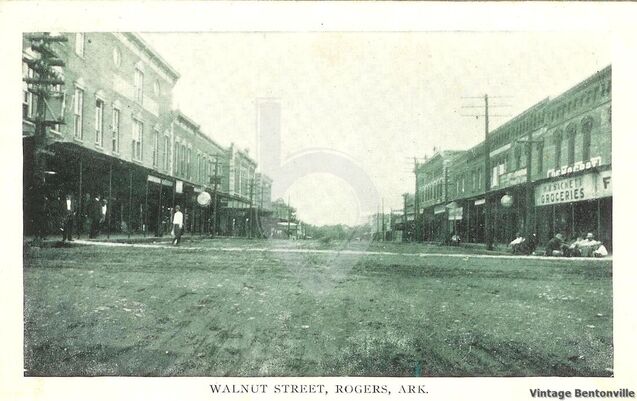