Silver Mines Near Monte? Were They Fact or Hoax?
by J. Dickson Black (1976)
In all of my research on Benton county history, I had never heard of a big silver strike in the county, but in reading the Fayetteville Democrat of May 1869, I recently found several articles about a silver find that apparently brought several hundred would-be miners to Benton county to stake claims on the four square miles of the land that held hopes of immediate wealth.

In one article the writer, who must have been one of the editors of the newspaper, tells of making a trip from Fayetteville to the Silver Mines at Silver Springs, on Hickory Creek in Benton county. At this time E.B. and W.B. Moore were listed as editors.

The writer traveled with a group from Fayetteville and they camped overnight on May 13th at Silver Springs (later named Monte Ne). There was a a large camp there already. One shaft had been put down to six feet, as a start. In this they had found ore that was said to hold a considerable quantity of silver.

Early the next morning the group prospected through the region lying between Hickory Creek and White River, a ridge or bluff one mile in width and three miles in length. In this portion of the mining region the trees had been blazed in every direction, showing that the whole area had been laid out in claim of 50 yards square by different parties. Also a claimed was about one square mile of land west of Hickory Creek.

The early Fayetteville writer said, "From all that we can learn, a considerable quantity of rich ore of some kind is imbedded in these mines, and should it prove to be silver we are satisfied that there is a sufficient quantity to return a handsome income to the miners. During the time we were at the mines, three days, about five hundred persons were there taking claims. Some returned home to work their crops and others made preparations to commence work. We are of the opinion that about two thousand claims have been laid.

"Companies are being organized, some of which will in a few days send an agent to St. Louis with specimens of the ore, for a thorough test, and if the metal is valuable will commence operations immediately with proper machinery."

At this time a Mr. Green of Benton county was sent to St. Louis to have some of the ore tested. The article ended with a promise to keep the readers posted on this "great silver mining" effort.

One man writing to the Fayetteville paper said, "It is evident that there is a large amount of some kind of metal here, but all efforts to test its value have proven futile. It I was asked I would say it is silver. But that is what I get from talking to others here."

"The general appearance of things here is very lively. Houses are being erected, and mine shafts are starting. It is just a very busy place," he added. 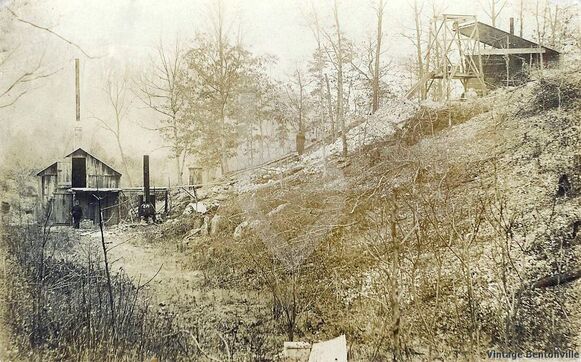 Silver Mine in Benton County
"Our friend P. informed me that he found a reporter from the Echo (a Fayetteville newspaper) at Gregg's Prairie some six miles from (the mining) camp on the road from Fayetteville. He had a carpet bag with him with him containing one pound of middling meat, five soda crackers, and eight quart bottles: five empty and three full of very potent whiskey.

​"He (the reporter) complained that his feet were very sore and that he couldn't travel any farther. He had cut the top off of a little bush on which he hung his carpet-bag and stove pipe-hat to make a shade. This shade he proclaimed his sanctum Sanctonint. He had a bundle of paper with him. One sheet he used as a bed, and the remainder he was using to write articles for the Echo.

"He had  a young copper-colored African for a daily courier from his Sanctum to the shanty in Fayetteville where the paper is supposed to be  published."

The writer went on to tell that the man was too drunk to tell his name, or to write much of an article about the mines, which he hadn't even seen yet.

The largest company organized was the Manmouth Ore Joint Stock Mining Company. It had 144 members, and their claim reached into White river, giving then abundant water for mining operations.

The letter was signed only "G.B."

The following report was from Mr. Enno Sander, the chemist, to J. H. Wilson of Fayetteville. Sander is talking about metal ore sent to him by Dr. Stevenson. The ore was taken from the Hickory Creek mine.

"The flat piece of metal you left for examination contained a considerable quantity of silver, also some copper. The other small piece has no silver. I should like to have some more to examine it thoroughly." (signed) Enno Sander, Manufacturing Chemist.

Mr. Green, the gentleman sent with the ore to St. Louis by the Center Mining Company, also reported favorably. He said the ore would yield over $200 per ton.

If Green was correct, the mines here should have paid handsomely, for I am told by old miners that $40 to $50 per ton was considered profitable. In an article on the mines in the Bentonville Traveler, I found the following:

"The report of Mr. Green, on his return from the test of the ore from Center Mines, made by an eminent chemist of the City of St. Louis, is such as to far exceed our most sanguine expectations. The ore tested was found in the shaft of the Green tract, at from eight to twenty feet from the surface, The rock the company is now blasting, still gives the miners greater prospects, as it still grows richer."

"The news is indeed cheering. We do not make these assertions for the purpose of raising an unusual excitement, or misleading anyone, but that our people may learn the fact of the vast riches our mountains contain. We would earnestly urge the farmers of the country not to neglect their crops, as the success of the mines depends on a great extent to the success of the farmers. The reports from the mines are fast spreading far and wide, which is bound to bring a rush of people, all of whom will have to be fed, and we predict a high price for all farm products. We would, however, advise all who wish to take an interest in the mines to go out and secure a claim and return to your crops."

Even the St. Louis newspaper wrote of the discovery of silver in Arkansas, The Republican ran the following on May 12:

We learn from Mr. J. H. Van Hoose of Fayetteville, Arkansas, that silver ore has been discovered in northwestern Arkansas, thirteen miles from Fayetteville. The deposit in silver and copper mixed between strata of slate, and an an experienced miner states that it is equal in richness and extent to the silver mines in Nevada. Some of the metal extracted from the rocks was forwarded to Mr. Enno Sander of this city, and pronounced by him to be nearly pure silver. The ore is said to be very abundant."

Other articles told that moneyed men at St. Louis and other cities were going to send men in to look this over this vast mining area. Some told of miners from the West who were coming to look it over and stake claims.


​As published in the Benton County Pioneer, Summer 1977