​Lewis P. Smart. member of the firm of Smart & Brown, proprietors of the livery and feed stable at Bentonville, Ark., was born in Calhoun County, Ala., in 1857, and is the son of Dr. John and Essie C. (Piles) Smart. [For further particulars of parents see sketch of Dr. John Smart.] Lewis P. Smart came to Bentonville, Ark., with his father in 1872, and received his education in that city. At the age of sixteen he commenced clerking for W. A. Terry, and worked for him five years.

In 1881 he was appointed deputy sheriff of Benton County, and served two years. In 1885 he was a candidate for sheriff, with seven opponents, and came out victorious. In the same year he hired to W. A. Terry in the livery stable, and after fifteen months Mr. Smart bought one-half interest. In 1885 Mr. Smart bought the entire stock, and in June, 1887, sold one-half interest to Mr. Brown, and since that date the firm title has been Smart & Co. They keep forty-three horses, two single buggies, sixteen double buggies, and one bus to all trains, one transfer wagon, one lumber wagon, a hearse, and keep two stable horses - Percheron Norman, weighs 1,540 pounds, and is eight years old; Denmark, saddle stock, with seven different gaits, weight 1,200 pounds, Their barn is 40×165 feet, extending across one block, with two fronts, Messrs. Smart and Brown have the most extensive and best equipped livery stable in the State outside of Little Rock. They are first-class business men, and attend strictly to the business at hand, and are courteous and obliging. 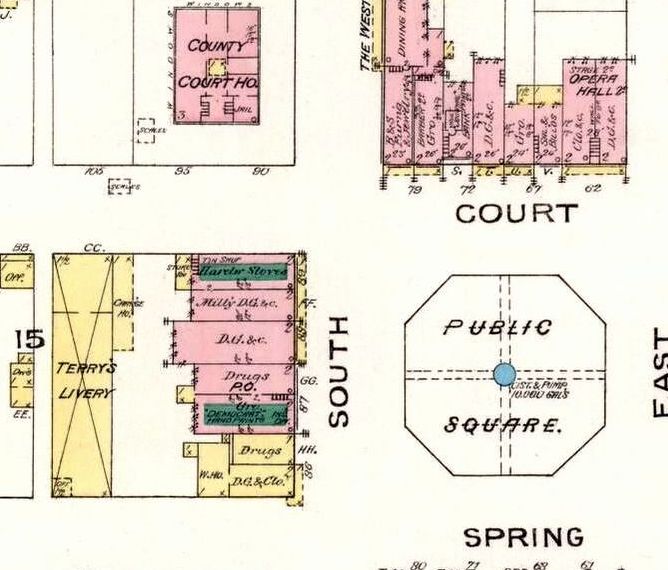 The left side of the image above shows where Terry's Livery was located. This later became Smart & Brown livery stable.