Dr. John Smartt was the president of the People's Bank at Bentonville, and also president of the
Bentonville Railroad. He was a native of McMinnville, Warren Co., Tenn., born in 1820, and the son of
George R. and Ethelia (Randolph) Smartt. George R. Smartt was born in Mecklenburg County, N. C.,
was of Scotch descent and a farmer by occupation. At the age of eight years he removed with his
parents to Warren County. Tenn., and in later years married Miss Randolph. He was a member of the
legislature one term and died in Warren County, Tenn., in 1856. His wife was a native of Tennessee,
and died in 1860. She was the mother of nine children, Dr. John Smartt being the third child.

The doctor was reared and grew to manhood on the farm and received a good education in
the Warren County schools. He remained with his parents until twenty-two years of age, and at the
age of twenty-four began the study of medicine, his preceptor being Dr. Alfred Payne. In 1846 and
1847 he attended the Lexington Medical College at Lexington. Ky., and in March of the last named
year he commenced his practice at McMinnville. Tenn. One year later he went to Oxford, Calhoun
Co., Ala., and resuming his practice, remained there until after the Civil War. In the fall of
1865, he went to Dallas, Texas, and in 1871, he became a resident of Bentonville, Ark.

He was a life-long Democrat in politics, casting his first vote for James K. Polk in 1844.
He was a stockholder in the Bentonville Evaporator and Canning Factory, and was vice-president of
the same. He and his wife were members of the Presbyterian Church, in which he was an elder for
twenty years. He passed away June 9, 1899, and was buried in the Bentonville Cemetery. 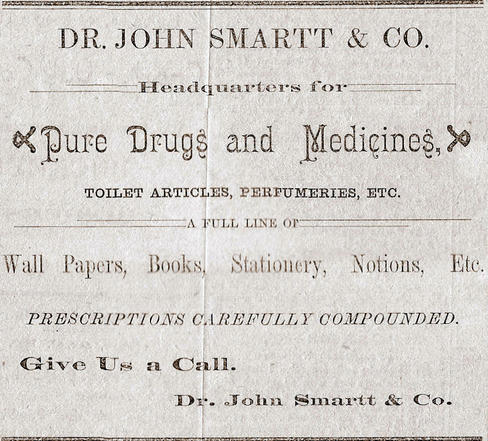