Some  History Of Eden's Bluff

Some History Of Eden's Bluff
Those who remember Eden's Bluff before Beaver Lake came in, remember a tall bluff with caves on the White River just out of Monte Ne. Some probably camped there, swam, canoed or fished under this bluff, but few people know the bluff also has a considerable amount of history. The bluff is believed to have been named after James A. Eden, who was an early pioneer settler in the area. 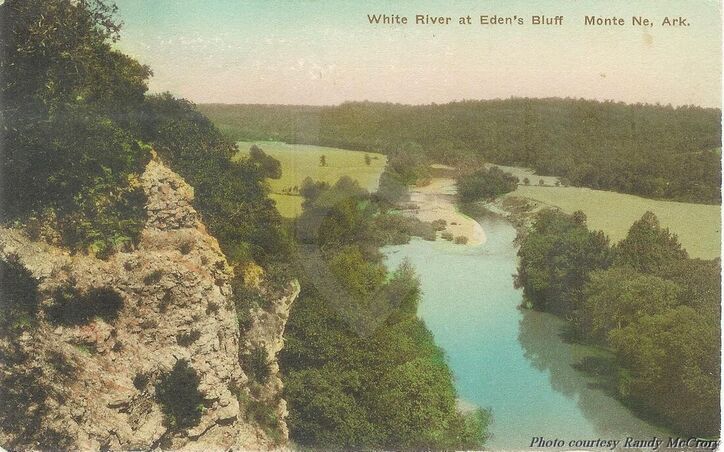 A view of the White River Valley looking down from the top of Eden's Bluff
​In 1894 people searching for Spanish treasure found an opening in the base of Eden's Bluff.  They believed it might have been a Spanish mine. They found an opening was about 70 feet deep. The explorers felt as if in the near future they would surely find both gold and silver. An early newspaper article that chronicled this exploration failed to mention whether any gold or silver was found at that time.

It was said by a local native (fact or fiction?) that in 1900 the area around Eden's Bluff was the subject of an extended search by the Spanish government to try to recover a buried Spanish gold cache. In the article from the 1922, it estimated the value of the expected treasure as $2,500,000, which today would be worth $4,250,000. Apparently they never found that treasure.

In 1901 an excavation was started again to try to locate the mine. This group came across a tunnel at a depth of 10 feet . The tunnel extended for about 110 feet and ended in a jug shaped room. The tunnel was quite large with the roof being 10 to 15 feet tall. The search was the outcome of some pointers given by Mexicans who were digging at Eden's Bluff the previous summer. They sought to find what they call the "Lost Mexican" silver mine. No precious minerals were ever known to have been found in their excavations. The only thing that was uncovered in this dig was four human skeltons. These were believed to be those of early Indians in the area.

In 1903 under the guidance of Mr. Jacobs, a noted archaeologist of Bentonville, Ark., some of the caverns of the White River valley in Arkansas were explored by Charles Peabody and W. K. Moorehead of Phillips Academy, Andover, Mass. The shelter at Eden's Bluff was used in early times for burials, five to six skeletons having at different times been exhumed, and a telling feature was the dried "wild hay" found in connection with the burials. This long grass was said to have been abundant on the hills at a time then the country was less heavily populated.

Petroglyphs are also found in the neighborhood of Eden's Bluff: cosmic symbols, tribal and totemic signs are in evidence. 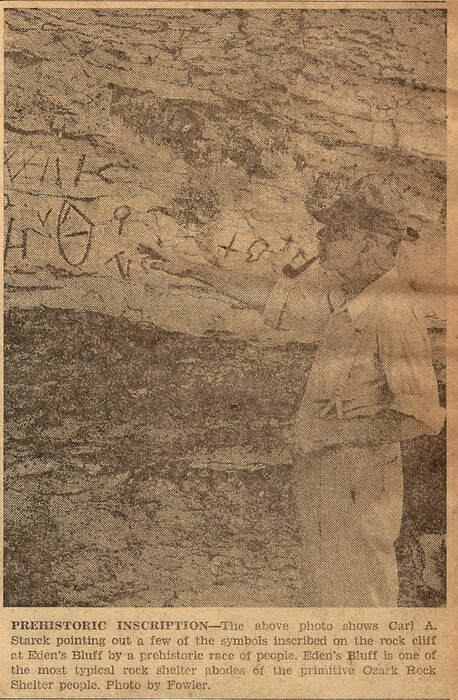 The above newspaper clipping is unidentified but is likely from  the Rogers Daily News, now the NWA Democrat Gazette.
Carl Starck, shown in this photo, passed away in 1934.
​In 1922, the search was on again, looking for Spanish gold and silver along the White River. The prospectors spent a considerable amount of  time searching the shore and the stony cliffs for the Spanish mine they sought. It is assumed that they searched the Eden's Bluff area very carefully, but the only thing they found on their adventure was a bunch of indian relics they had discovered while exploring the caves along the river. The relics meant very little to the gold seekers, and they sold them to a physician for not very much so they could continue their search. The physician who purchased the Indian artifacts realized these were unlike anything he had ever seen. He became curious and sent them off to the Museum of the American Indians in New York City. What they found was that the artifacts were from a very early lost race of Indians. The museum sent two men to the area to do a through study of the vicinity, in which they were rewarded with finding numerous artifacts. For lack of any other name for these indians, the scientists called them the Ozark Rock Shelter People.

In 1932 the University of Arkansas sent a party to Eden's Bluff. They made many more discoveries in the area, which were later displayed in the university museum. The skeletons at the site were determined to be pre-Columbian. One of the things found during this excavation was a very well preserved seed bag which contained about a liter of seed from a domesticated but now extinct starchy-oily seed plant similar to quinoa.

Most of Eden's Bluff was covered up in the 1960s when Beaver Lake was filled. If there was any gold located in Eden's Bluff, it is now long lost under Beaver Lake.