Sorghum Making Time
By J. Dickson Black (1959)
When autumn comes and the leaves turn gold, it is sorghum making time in the many states where they grow sorghum cane. I have seen it made in over a dozen states, and the process is just about the same. The flavor will vary some as to the type of ground the cane is grow on.

Sorghum is an old, old product on the farm, It was one of the main sweetenings that the early settlers had. Most of the old mills were small and were hand or horse operated, but that has all been changed. 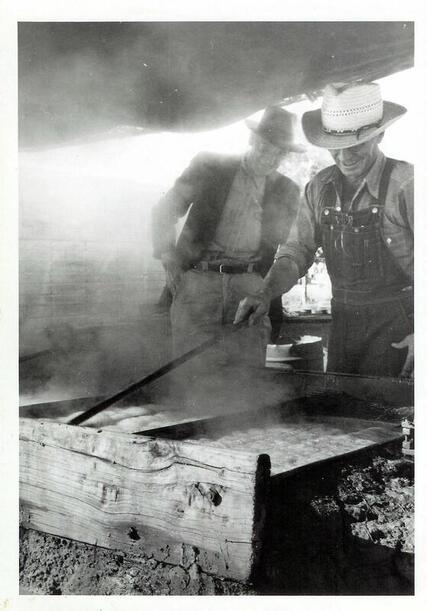 A man watching Orval Jones stirring the sorghum juice. He has been making sorghum molasses at his sorghum mill on U. S. Highway 71 at Bentonville Arkansas.
When half the grain in the seed head is ripe, the cane is ready to be stripped and taken to the mill. A thin paddle made of wood is used to knock the leaves off the cane stalk. The stalk is cut down and hauled to the mill. It is stacked near the juice grinder until they are ready to grind it. 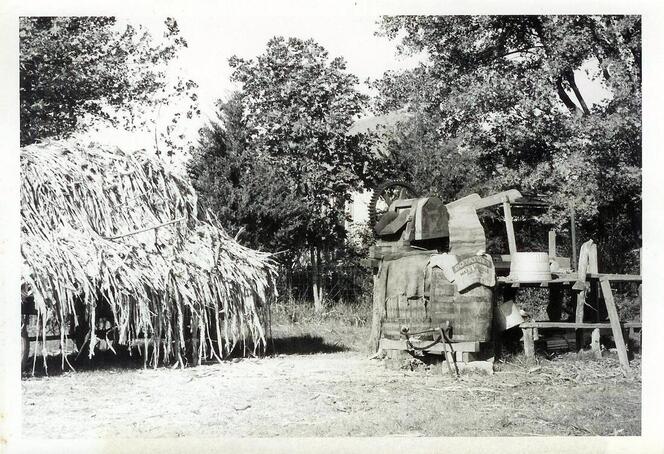 It looks like part of a still, but it is the grinder for the sorghum mill. The juice has already been taken from the load of cane.
The grinder is almost the same as a hundred years ago. but they are powered by gas engines or tractors now. Years ago it took a horse or team that had to be driven in a circle all day to run the grinder.

The juice runs from the grinder into barrels or a storage vat. From these it is piped into the boiling-off vat. These vats vary in size from six feet long to twenty. The pans are mostly made of copper and set on a rock or cement base. They all have a roof over them, and some have a house built around them.

These large vats are heated with gas burners that burn either propane or natural gas. Because of this they can have valves to turn the fire up or down. This fire control has been a great help. If they get the juice too hot, it burns or boils over. 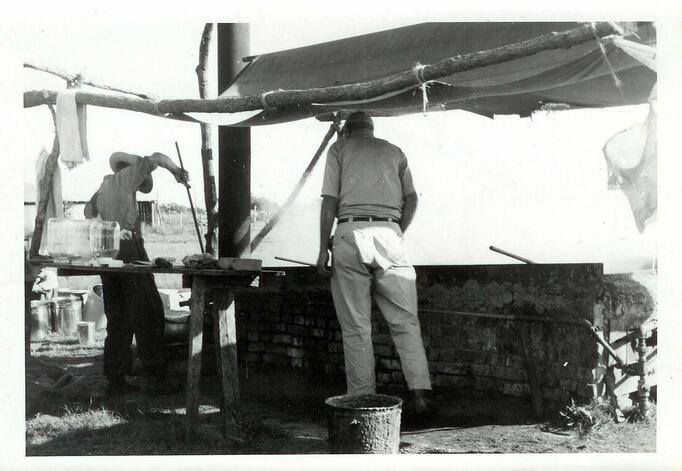 An overall view of the mill. Mr. Jones is working on the left, and his helper is Mr. Frank Ray.
There was a time when they heated with a wood fire. It took a man hard at work all day to cut the wood and feed the fire. If it got too hot he had to put the fire out some and then build it up. It was never just right for more than a few minutes at a time.

The vat is divided into seven to twenty foot sections with gates from one section to the next. The juice is let in at one end of the pan and is cooked so long in each section, then moved to the next. By the time it is moved to the last section and cooked there for ten minutes,  it is done. 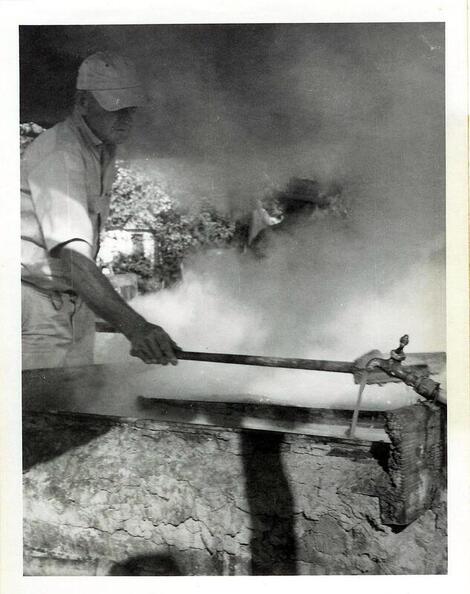 Mr. Frank Ray, running new juice in the cooking vat
It takes about an hour's cooking time to make the juice into sorghum. As it cooking, someone has to stand there and keep stirring and skimming the juice. All the green scum has to be taken off as the juice cooks. It is the skimming that makes the sorghum good. 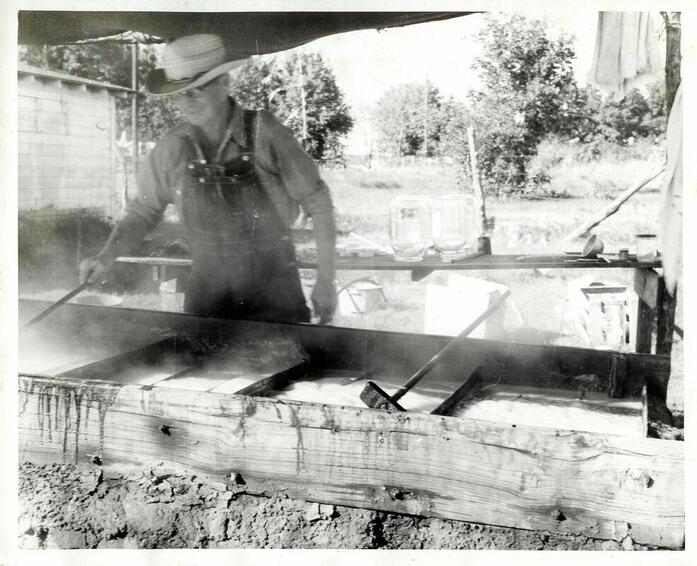 Here shows Orval Jones in the stirring and skimming process of making the sorghum molasses.
When the sorghum is all cooked, it is canned in half  and gallon syrup cans. In the old days it was done up in whatever the people took to a mill to get it - a stone jug, milk can, or wooden bucket.

​There was a day when there were lots of sorghum mills. The owner would grow big fields of his own cane. He would also process his neighbors' crops. They could pay him, or he would take a part of their sorghum for the bill. 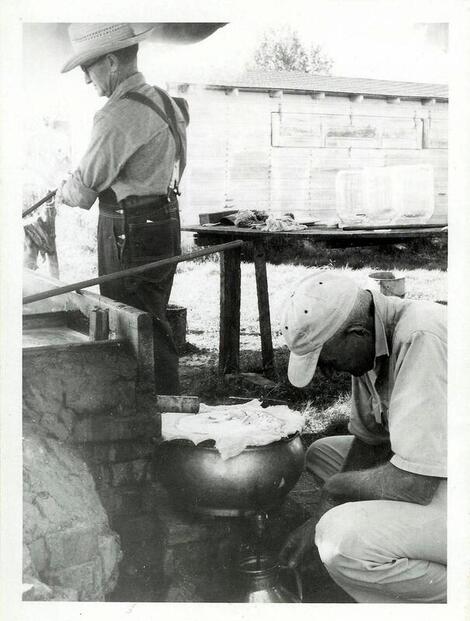 Mr. Jones cooks the sorghum as Mr. Ray runs off some that is cooked. This mill is owned by by Mr. Orval Jones of Bentonville, Arkansas. He makes about 400 gallons of sorghum molasses every year. His father and grandfather both made sorghum molasses.
Most of the mills that are running today are run by the sons of men who had mills. It seems to follow through in the family.

These mills make from 400 to 2000 gallons a season but each year there is less and less sorghum made. Let's hope they never stop making it. There are few things better to eat than sorghum, homemade butter and hot biscuits.