Spanish Treasure Cave - Located between Gravette and Sulphur Springs
Tucked into the extreme northwest corner of Arkansas is a cave-riddled area, Some of the caves have a rich history and are known to have been used by outlaws and Indians. The caves provided shelter and a warm place in the winter and a cool place in the summer.

There is one legend that talks about Spanish gold being buried in one of these caves, and maybe as much as 40 million dollars' worth of gold as calculated by today's standards, as it is told. The story goes that about 275 years ago, a band of Spanish conquistadors came through Mexico, Texas and Oklahoma, then into Arkansas. As they traveled through various areas, they robbed churches, Aztec Indians, other Indian groups, and took anything they could find of value. It is said that by the time they reached northwest Arkansas they had accumulated several chests of gold coins, gold bars and other valuable artifacts. As they entered our area, a blizzard came and the Spaniards took cover in a cave near Gravette, Arkansas. A fire was built inside to keep the Spanish conquistadors warm. The cave, though, had a natural chimney, and the smoke from the fire was seen by local Indians who, according to legend, had been brutalized by the Spaniards. The Indians attacked in retaliation and killed most of the Spaniards.

Someone must have escaped from the Indian attack. Much later, settlers talked about the arrival of an old Spaniard by stagecoach in October of 1885. With him he brought three old parchment maps that point to a particular cave in that area. The man had ridden in from Mexico, and he was very hard to understand, but did manage to communicate that he planned to stay a while and that he was looking for a cave in the area.

The word was spread that he was looking for a cave with a big flat rock covering the opening, and on that rock should be a marking carved into it. Some locals helped him look for the cave he described. It wasn't long before someone reported that a rock with some funny markings on it had been found. When they took the old Spaniard to see the rock, he got very excited and asked the owner, who lived in a nearby cabin, for permission to move the rock. When they did, they found a cave opening behind it. 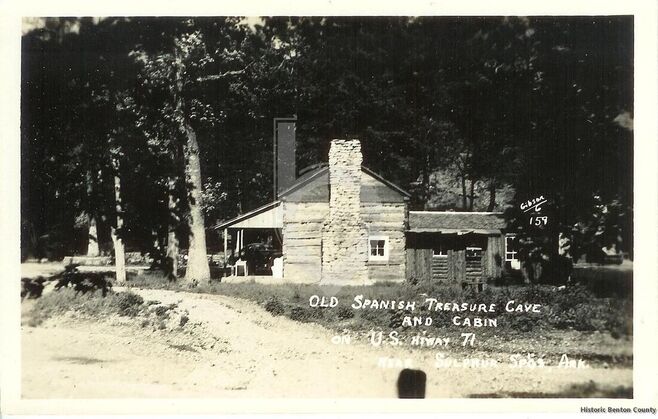 An old pioneer cabin that sits near the entrance to the Old Spanish Treasure Cave.
​It is believed to be the oldest standing log cabin in Benton County.
The old Spaniard hired a group of men to start excavating the cave. They found a large natural entrance and an angled passageway that appeared to have been covered up. The Spaniard would look at his maps which only he could read and then give the men direction as to where to dig each day. Where he said there would be landmarks in the cave, they were usually right where he said they would be. The Spaniard stayed for about a year, and as the fall weather set in, he decided he needed to go further south where it was warmer because his health wasn't good. He left enough money to pay the men to continue to dig. 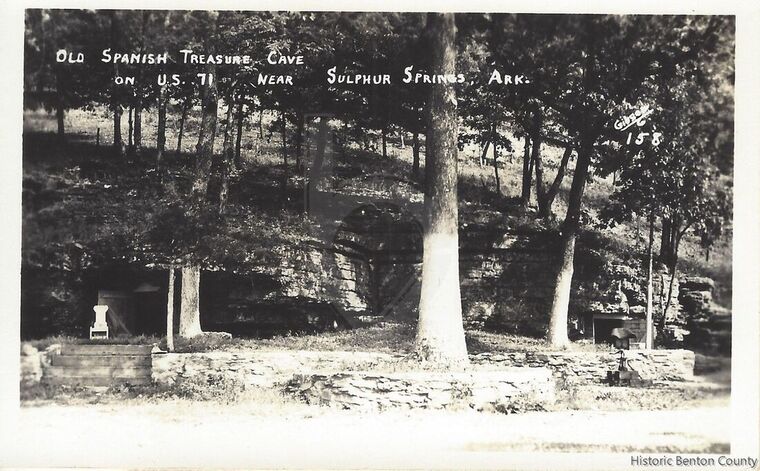 A postcard view of the entrance to Spanish Treasure Cave from probably from around the 1940's
Before he left, he shaved the bark off of a tree until he got to the smooth surface of the inside of the tree. On the tree he traced a map of everything they had already done and where he wanted the workers to continue to work inside the cave. Once they reached a certain point they were to write to two addresses, one being in Madrid, Spain, and the other in Mexico. They were told once they wrote to those addresses that people would come and guide then on additional excavation. He took his charts and left, never to be seen in the area again.

What happened to the old Spaniard no one knew until about 35 years later. Someone from the local area around the cave had gotten a job in Oklahoma. He was working in Paul's Valley, Oklahoma, when he met someone who asked about caves in the area of the Missouri-Arkansas border. He went on to tell the story of an old Spaniard who had stopped there years earlier, as he had come down with a case of pneumonia. No one in his family could much understand the man because he was mostly a Spanish speaker. He had a number of maps with him that he said if something should happen to him the maps should be sent to Madrid, Spain. The old Spaniard did die from his sickness, and the maps apparently never got sent. The people who had met him apparently knew the maps  were from the northwest corner of Arkansas, but were not sure exactly where. The maps kind of bounced from family member to family member until they were eventually lost.

We know that whoever has owned the cave since then has continued to look for the treasure. The cave has been a place for groups visiting Sulphur Springs to go visit during much of the 1900's. It is said that in 1908, a man by the name of George Dunbar owned the cave and had some found gold coins and a bracelet. Mr. Dunbar started a mining operation called the Sulphur Springs Cave Company, which was a cover name to keep people from knowing his true intent to try finding the buried treasure. Recently, old rail line for mining cars was found in the cave from this time. Donkeys would pull the ore carts through the cave.  Also in 1908, the Gravette Commercial Club tried to get an electric railway built from Sulphur Springs to the Spanish Treasure Cave, but this apparently never happened. It wasn't until the 1930's that Spanish Treasure Cave opened as a tourist attraction open to the public.

From a 1926 newspaper article, we know there was extensive excavation done prior to that time.  The new owner, W. W. Knight of Kansas City, employed scientists to do a survey of the cave. The cave has since changed hands many times over the years.

The most recent owners are Paul and Tracy Linscott who have owned the cave for the last 25 years. Although Linscott can't confirm the stories of hidden Spanish treasure in the cave, he hopes to find more proof the Spaniards were in the cave a long time ago. Under his ownership, a sword blade and a belt have been found. When the Linscotts purchased the property, the tree that was marked by the old Spaniard was still there. It was overgrown with bark by that time since it had been many years since the map had been carved on it. The tree has since been destroyed by a lightning strike. Fortunately, Mr. Linscott said he had taken a good photo of the tree before it was destroyed.

One summer there was a severe drought in our area which allowed the owners to access a part of the cave that is usually underwater. They found some symbols that looked like a candy cane and an eye with some squiggly lines above it. They turned to where the eye would be looking and found a small space, and looking in, they saw a little room with a long pool in it. They started to dig to make the entrance large enough to be able to enter the room. In the process of their digging they found wood encased in the clay. Before they could gain access to the room, it rained again and the water table rose in the cave to where they no longer had access to that area. They're waiting for the next drought in the area to explore that part of the cave further. Their feeling is that if they were to find the treasure, that's where it would be.

Linscott said that they recently found another passage they are calling the Lost Miner's Tunnel. They are now trying to figure out exactly where it may lead. There are also indications of other possible larger chambers. The cave doesn't seem to have yet given up all of its mysteries.

Buried treasure or not, the Old Spanish Treasure Cave is worth a visit. It is a popular destination for scout and school groups. As a living cave, its formations are still growing. The cave contains stalagmites, stalactites, soda straws, flowstone, large columns and more. A highlight of the cave is a large chamber that is known at the Council Room. It is large enough that the cave owners often host family movies in this room in the summertime. The temperature in the cave stays a constant 56 to 64 degrees year around, and the path inside is well lit. It is open every day during the summer and reduced hours during the winter. 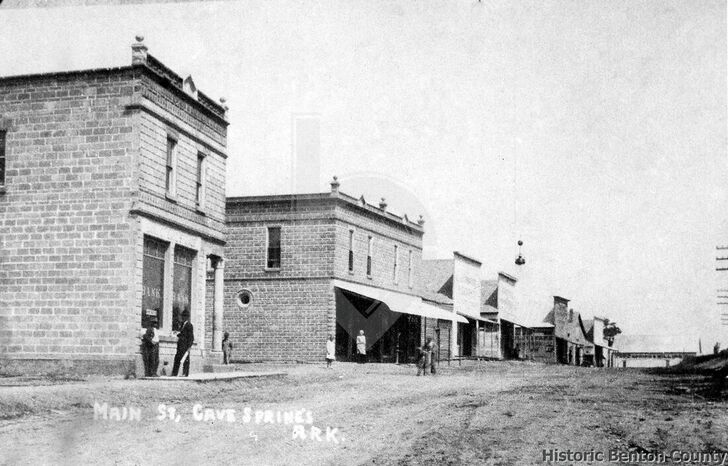 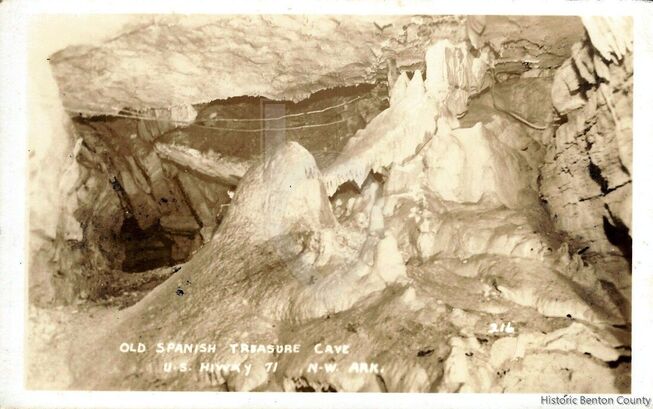 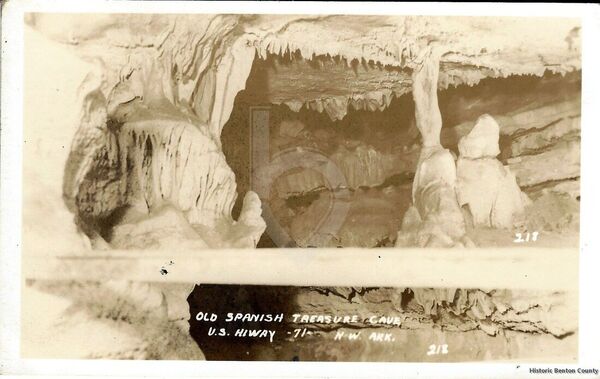 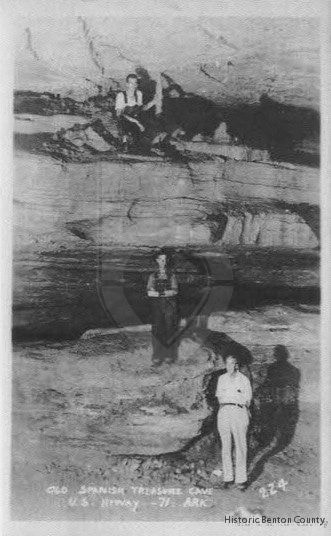 Here are some old views of the interior of the cave from some old postcards.
The main source for this piece was: Old West Magazine, Winter, 1983, article by Sarae Michaels.
​Also sourced from several online pages and articles from Newspapers.com.