Springs a Favorite Site to Swim, Picnic
By Charlie Craig
From The Benton County Democrat - February 18, 1990 [Now the NWA Democrat Gazette]
At the turn of the century the citizens of Bentonville had two favorite picnic grounds: two springs, one five miles north, the other six miles south.

As you might expect, one was called North Cave Springs and the other South Cave Springs. They were similar in many ways, yet vastly different too. Both springs flowed west from under a bluff. Both springs produced pure spring water and it was cold, cold enough that lakes could be formed which would support rainbow trout (the trout came later).
​
The south cave spring was (and still is) located in the very center of a thriving community which boasted a mill, several stores, post office, church and school. 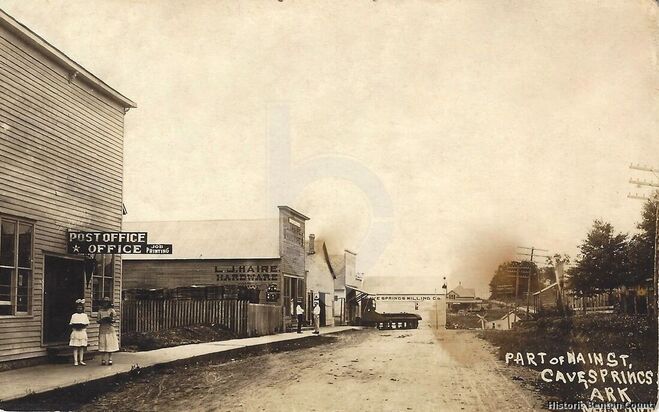 Early town view of Cave Springs
In the early 'teens a most unusual dam was built about two hundred yards below the spring, made of concrete and steel. It was a hollow construction, maybe 15 by 20 feet. Inside were dressing rooms for bathers, boys at one end, girls at the other. The water was cold! By the time it reached the dam it was about 60 degrees. 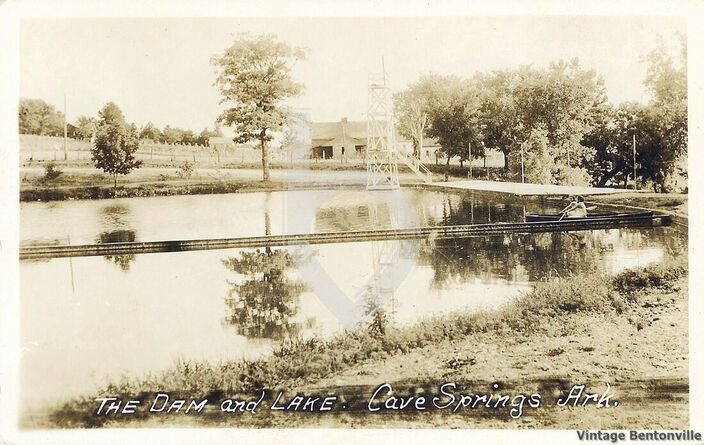 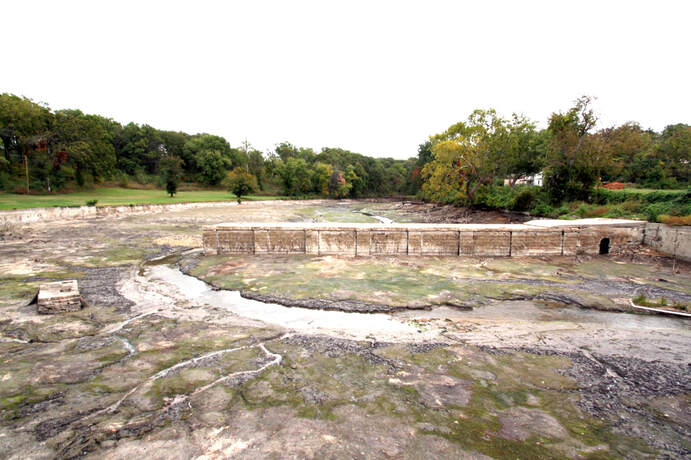 In 2013 the Cave Springs Lake was drained and the old dam that was built in 1914 was totally visible.
The swimming did not last too long. The dam developed problems and had to be repaired. There were no longer any dressing rooms. Still later the dam had to be abandoned and the road (Main Street) itself became the dam, as it is today. You can still see a part of the old dam, with a few inches above water, about 50 feet from the street. [Note: this was true as of the writing of this article in 1990.]

In the old days, we could drive completely around the lake, with the picnic ground at the spring. It was a custom to put watermelons in the spring when you first arrived for a picnic. It didn't take long for them to get cold. Today [1990] you can only drive to the parking area at the bait shop. Between there and the spring are the rearing and holding pens for thousands of trout, In that area, there are two places to fish for trout, then on below, a much larger area filled with bass, bream and catfish. 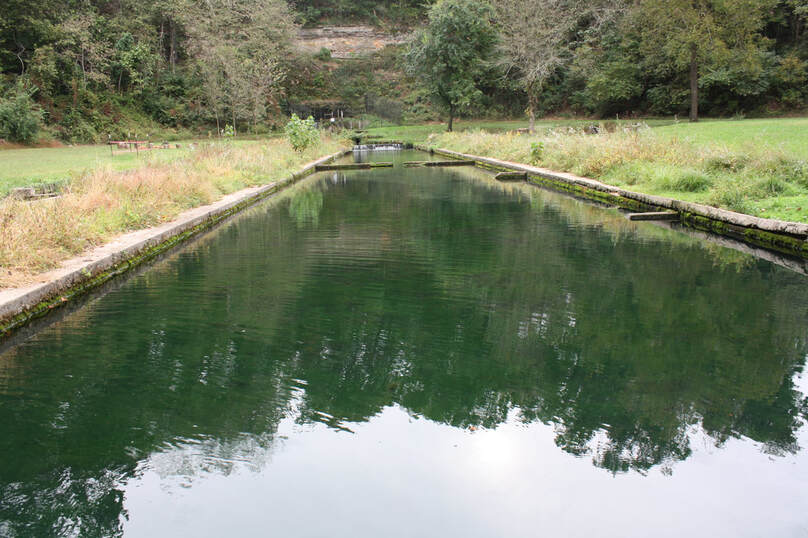 These are the remains of the old trout farm at Cave Springs.
​Since these photos were taken in 2013, they have been removed and the spring returned to its natural look.
​
At the parking area you can look up on three sides and see openings of small caves in the bluffs. There are also den openings beneath huge trees and in the ledges of rock.

If you wish to drive there from Bentonville, go south on Highway 112. Drive through town at Cave Springs until you get to the Lakeside Baptist Church and turn left, on the south side of the lake. There is a lot  more to be said about Cave Springs, but that will have to wait for another column. [Note: these directions are from a long time ago and might not match with today's structures and roads.]