The Big Red Apple Center
Bentonville, Arkansas the Beautiful Orchard City of the Ozarks
The Home of Wealth, Education and Refinement.
From the Bentonville Sun newspaper, June 2, 1894 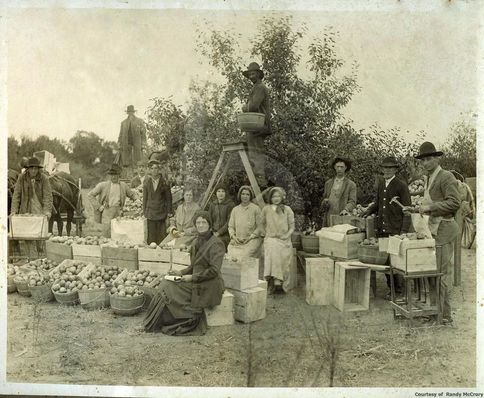 Bentonville, the county seat of Benton County, Arkansas, has demonstrated three problems which confront every person who studies the science of things and especially those related to the Ozark country. It has proven beyond cavil, that this section of the country is the great fruit country claimed for it, that the fruit industry is a successful and profitable one, and that a splendid commercial and peerless residence city can be built in this land so generously neglected in point of finish by the artist creation. It is one of those old fashion cities built around a center square, grown by slow degrees, flecked around here and there with building of a rude and ancient day., which forma conspicuously unsightly picture by the tall handsome massive, modern brick and stone blocks, of which the city has many. It is interesting and charming with age, its architecture blending back into the mellowy age of old fashioned Southern dignity and grandeur, and sparkles with the bright, beauty and splendor of modern dash, elegance and style. Its home, neat, handsome, splendid edifices, are set well back in large shady yards, well kept and richly clothed with a carpet of green, vines, flowers and shrubbery - wide, pretty, shady streets form a pretty and striking feature of the pride, taste and enterprise of the people.

The city is situated upon the the very summit of the broad table land of the Ozarks which comprises the south and west half of this and Washington counties, the land of which consisting of wide level stretches of prairie, undulating woods and wide fertile valleys. The city is environed on the immediate north with tall timbered mountains, from whose summit bottomless caverns, wild romantic gorges and canyons may be seen as they plow their way, cutting deep and irregular gashes in the mountain forest. Here is a semimountainour country the elevation of which in the highest place, reaches 1,00 feet, extending north for thirty miles, four-fifths of which is yet wild and uninhabited, and containing some of the most extensive caves, magnificent springs and great-natural wonders to be found in this wonderful state.
On the east, south and west is as pretty an open prairie belt as is to be to be seen in Kansas or Nebraska. The prairie, brokenat convenient intervals by timbered, spring-fed creeks along which narrow valleys, wend diagonally across the county from the northeast to the southwest, being in extent from five to ten miles long. On this prairie in the immediate vicinity of Bentonville and to less extent all through the county, the apple industry, for which this county has become so famous, has attained in greatest success and importance.
​
Bentonville was a pioneer in the development of this industry in the state, and to the enterprise of its fruitmen is due in large measure, the world-wide fame of this great apple country. From his point, the industry has spread to other sections of the state, having proven profitable and successful business wherever tried. But nowhere do all the conditions favorable for apple culture exist as in this northwestern corner of the state, the climate, soil and elevation all of the greatest importance, seem to be such as to meet all of the requirements.
​
The city of Bentonville has grown to be a flourishing place fo 3,000 population its greatest source of strength being derived from the apple industry; but its mild healthful climate, pure water, and splendid school and social advantages have attracted many people here from the North to make it a place of residence. Many of these have built handsome brick block and residences and invested their money in orchards, manufacturing, banking, lands, stock raising, agricultural and other enterprises which have constantly added to the city industrial welfare until it has become a prosperous place commercially as well as a delightful place of residence. The character of people being added to the city year by year, and the whole country for many mile surrounding, is one solid orchard, much of which has been put out in the last few years, and has not begun to bear. The apple crop is so extensive now in the county, that it willamoint to one million dollars annually; the banks of bentonville often paying as high as ten thousand dollars a day during the apple season; buyer from the leading eastern markets coming here in person to skip the fruit which is packed in barrels and shipped by the car load; the shipment in 1891 amounted to 374 car loads. There are three evaporators, distillery and vinegar factory here and evaporators using up all the refuse fruit and the berries.

This city connected with the Frisco Ry., by an independent line six miles long which is owned by Messrs, Henry and Wood, citizens of the place. The shipments of fruit over this line in and out of the town will average three and one-fourth car loads daily. Before the railroad was built the apple crop was in measure valueless, the fruit not commanding more than 10 to 25 cents per bushel and orchard lands could not be sold for more than $15 an acre. Now the fruit bring from forty cents to $1 and the orchard from $25 to $100 per acre. Previous to the building of the railroad in 1876, people hauled fruit in wagons to markets as far as Texas, which state is the largest consumer of the fruit of this section.

One of the recent enterprise of the city is a large college which is now in course of erection.
Some Of The Leading Fruit Growers 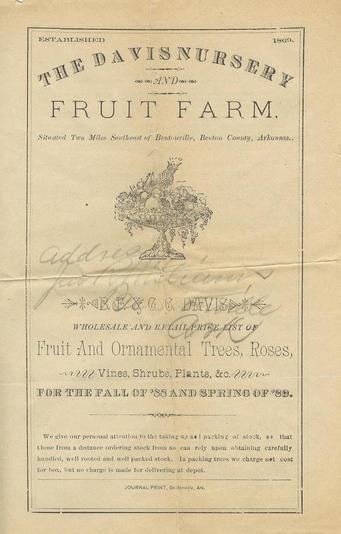 There is probably no other industry which yields a larger revenue in proportion in the capital invested and labor applied than a fruit orchard, and nothing in the fruit line is more cheaply grown, easily handled and sure of a good market than apples. This crop has proved so profitable in this locality that it is now attracting capital on a large scale, and the time is not far distant when this country will be one great garden and orchard, and densely populated as these roughest lands are fertile and productive.

There is a gradual increase in values and good orchards are in active demand, and lands here are rated very low though, compared to their real worth. Values are based upon the character of the orchard, the improvements and nearness to the city. One of the finest orchards in this vicinity, consisting of eighty acres, is owned by Mr. C. J. Eld. It was purchased a few years ago by a North Missourian at $37.50 per acre and afterwards sold to the present owner for $75, who has refused $110.

G. C. Davis has one of the largest orchards in the county, owning altogether 550 acres of land, 400 of which is in the orchard, or about 25,000 trees, 18,000 which are bearing. Mr. Davis may be justly titled the father of the apple industry in this county, and like all successful men, began in a small way, and as a matter of necessity, and not because he expected the fame and gratitude to which he is eminently entitled. It was a matter of stern, cold business for temporary existence, that got him started in a project which has through his early efforts and splendid success, grown to be one engaging prominence. He came here in '67 [1867] from the cold bleak wheat and blizzard country, Minnesota, and said he thought this the worst country he ever saw, but he couldn't go back, nor remain idle, for there were no such things as Coxey unindustrial armies those days for making tramps, patriots, statesmen and local citizens, so he went  to work, at much less than union wages. He raised chickens and gardens and among other things he planted a pint of apple seeds, which, like everything everything planted in Arkansas soil came up, grew vigorously and made the old gentleman a fortune. He grafted them and started a one-horse nursery, and was by this time developing a good credit, and as land was very cheap he began buying it on time from his neighbors and is to-day the apple king of Arkansas and one of its most substantial citizens. He has one acre of Ben Davis, 20 years old, which has averaged him $85 for 9 years, and has sold $225 worth of winesaps in one season off 26 trees. In '92 he sold $125 worth off 6 Shannon Pippins. He got $3,000 a year from one 50-acre tract and tells us he has gathered as many as 7 bushels off one tree 7 years old. Aside from his other interests he owns one-third interest in the Benton county nursery, the largest in the state. All this is the product of old Mother Necessity, the grit and genius of American manhood, and that pint of apple seeds.

McHenry and Bryan, dealers in fruit, produce and poultry, is one of the largest firms in the state. They have houses at Fort Smith, Fayetteville and Gentry City. They ship from two to five car loads of eggs and poultry a week and have handled as high as 190 car loads of apples during the season. The firm was established eight years ago, the senior member being a native of Illinois and the latter of Iowa. They are reliable gentlemen and well informed upon the fruit and poultry subjects.

H. L. Cross, editor of the Bentonville Sun, and A. O. U. W. Guide, is doing a great work for Northwestern Arkansas. He came here 3 years ago from Cameron, Mo., having achieved a high place in Missouri journalism and is meeting with deserved and substantial success in this state, his efforts in praise of the state being of an enthusiastic and telling nature. Unlike other journalists he is devoting more space to industrial subjects than political. His publications are creditable productions and are widely circulated.

There are apple trees in this county 60 years old which bear 75 bushels to the tree. A failure having never been known in this county.

It is estimated that in ten years the apple crop of this county will amount to $5,000,000 annually.

​The product of 500 acres of berries could be consumed by the evaporators in the city.