In the 1840s and 1850s, the country saw a need for fast, reliable mail service to California due to the gold rush when thousands of people headed west looking to make their fortunes. A bill in was put forward in congress and passed in March 1857 to create a cross country mail route. The bill left the placement of the route to the Postmaster General to decide. The bill specified that there must be a good four horse coach, able to carry passengers as well as having a safe way to secure the mail. Each run on the route had to be completed from St. Louis, Missouri to San Francisco in a 25 day period of time. The government required that the service was to be implemented within one year.

It was decided that the route must serve both St. Louis and Memphis as eastern points, then go to Little Rock, Preston, Arizona, El Paso Texas, Fort Yuma, California  and end up in San Francisco. There were nine bids on the route, three of which were submitted but John Butterfield, whose bids varied in services and cost. The contract was awarded to Butterfield, paying $600,000 a year to provided semi-weekly service. The company name was "The Overland Mail Company," also referred to as the "Butterfield Overland Company." The coach line purchased 1,200 horses and 600 mules, and over 250 coaches and wagons were ordered. The animals were distributed between 141 stagecoach stops along the route so that fresh animals could be swapped out on a regular basis. 1000 people were hired and trained for many different tasks in the company.  The route was to cover 2,795 miles, and the first run began on September 17, 1858, exactly a year after winning the bid for the route. 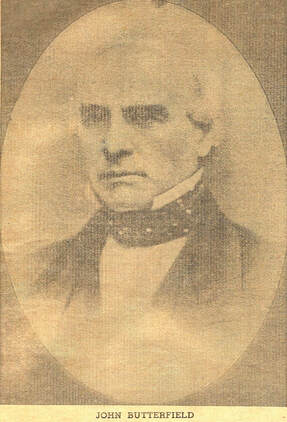 John Butterfield, founder of the first Overland Mail Route
The route that came through northwest Arkansas started in St. Louis, Missouri. and the mail would travel by train to Tipton,Missouri. which was as far as the train went at that time. From there the coach journey began. It traveled through Springfield, Missouri, on its way to Arkansas. The route entered Arkansas just north of Elk Horn Tavern in the Pea Ridge area. Little did they realize that just three and a half years later the Battle of Pea Ridge would be fought there. Elk Horn Tavern was not a designated mail stop along the route, but since Elk Horn was part of  several other stagecoach routes, it is believed that they would stop to pick up and let off passengers. It was also a popular rest stop known for its good food and liquor.  The cost for traveling the whole route from St. Louis to San Francisco was $200. but passengers could board for shorter distances for 10 cents a mile. The route used at that time ran parallel to that we know as highway 62 today, passing near Brightwater and Avoca on its way. This road had also at various times been known as Military Road, Federal Road, and Old Wire Road. 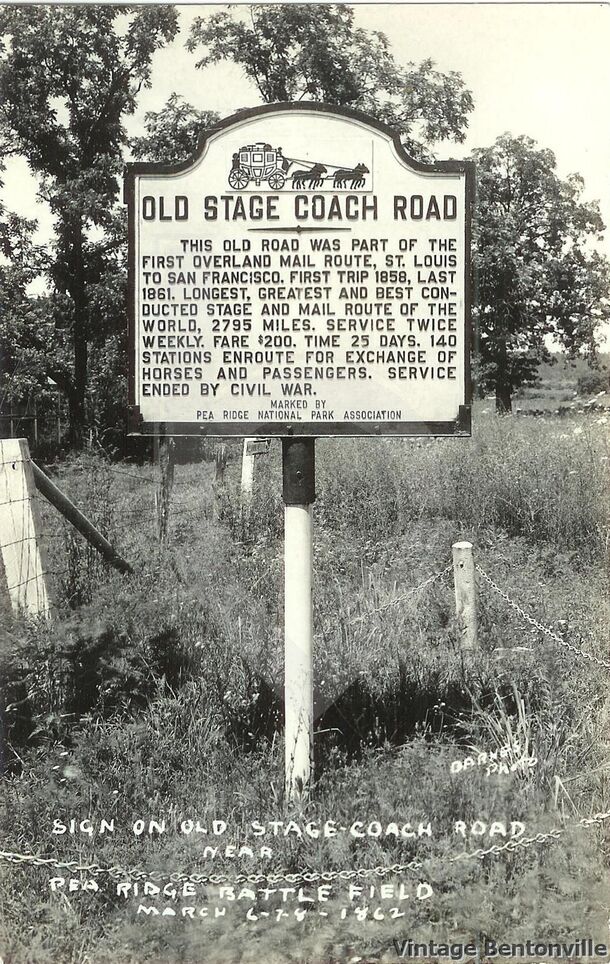 ​From here the first designated mail stop in Arkansas was at Callahan's Tavern in the area that would 23 years later become the city of Rogers. It was operated by Dennis Callahan. There was a spring by the tavern called Callahan's Spring. There has been some questions as to where Callahan's Tavern was actually located. The most common belief from reading several early accounts is that it was located on East Spruce Street in the area of where the Office of Human Concern is located today. One account says that the front of that building is the original Callahan's station (Rogers Daily News May, 1963). Some people believe it might have been located down around Electric Springs on Highway 12. Either way, it provided the needs of the mail route.

​Like at most stations, the axles were greased and horses changed out. While passengers were waiting, they could purchase breakfast for 40 to 50 cents. This would all be done in an incredibly short period of time because the time table was strict in order to meet the 25 day goal of the contract.

From Callahan's Tavern, the stage coach would head due south through Cross Hollows south of Rogers, and Mud Town (which is now Lowell) towards Fitzgerald Station which is located at the north end of what is now Springdale. There the stage would make a quick stop. At that location John Fitzgerald lived in a log house and had a barn that was used for the Overland Mail Route. The house had been known as a tavern and inn as early as the 1830s. Mr. Fitzgerald's house is long gone but the stone stable barn is still standing. The old barn is one of five remaining structures from the Butterfield Overland Mail route, and of those, it is the only barn remaining. The barn was added to the National Register of Historic Places in 2003.  There has been recent interest in the preservation of the old barn, and several steps have been taken toward this goal. 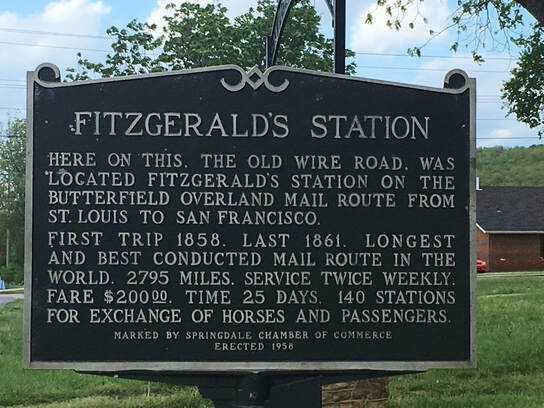 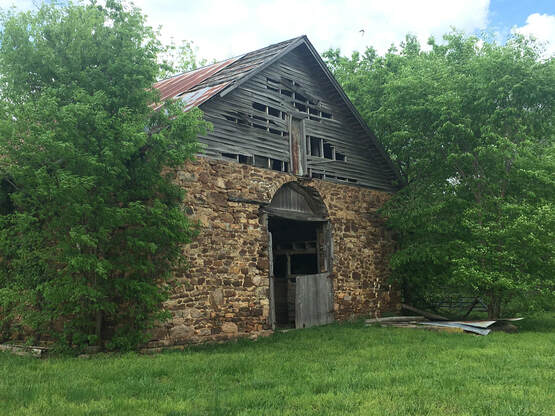 Remains of the stable at Fitzgerald Station
The next stagecoach stop would be in Fayetteville was 12 miles away. Fayetteville was considered an important stop along the line. It was the county seat with a population of 1,800 people. The city had a courthouse, several schools, two churches, and a large business area. The original station sat where the old old Washington County Courthouse is located.

Due to the lack of a good hotel in town, John Butterfield bought a five acre plot of land where he built a new station, a large barn and a hotel. The hotel was just north and across the street from the old Washington County Courthouse. The Fayetteville station was run by John Butterfield's son, Charles. Mr. Butterfield often visited Fayetteville because he loved the Ozarks, calling the region "the most healthful and beautiful along the route." The trip from Callahan's Tavern to Fayetteville took about three hours at that time. 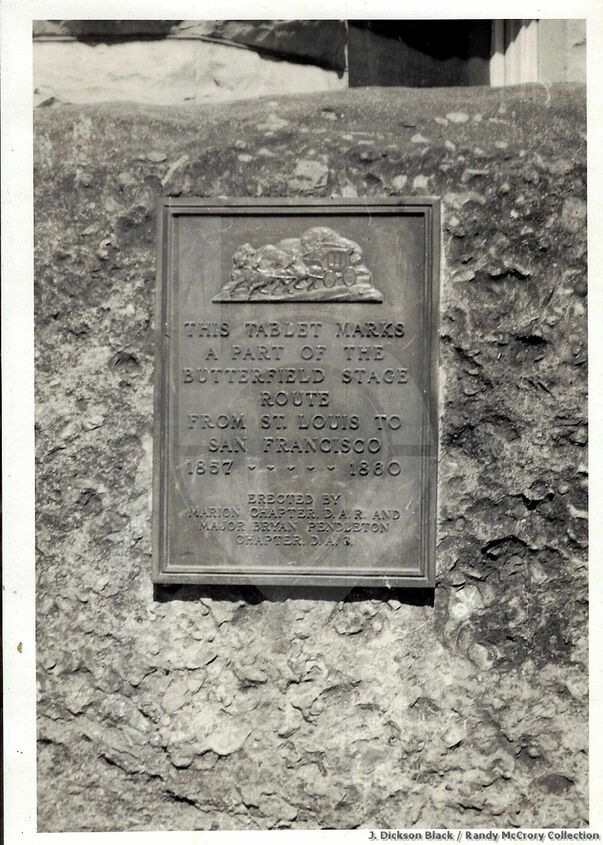 In front of the Washington County courthouse at Fayetteville is this nice bronze plaque. It marks the corner of five acres  owned by the Butterfield where he built his station and stables.
For the trip from Fayetteville to Fort Smith, the Butterfield used their most durable coaches with the most experienced drivers, as well as the best animals they had. This stretch was the most arduous of the entire Overland Mail route.
From Fayetteville, the route headed southwest 12 miles to Hog Eye. This had become a popular stopping place known for its good food and drink served in the tavern. The distilled corn spirits were distributed to the customers in earthenware jugs. This was not a station along the route but was stopped at regularly by the stage if it was ahead of schedule.

Just two miles down the road from Hog Eye was Park's Station, whose station agent was John Parks. The foundation of a large barn can still be seen at this location. As with most stations, extra horses and mules were available. Here, even an extra stage was ready in case one was damaged or turned over due to the rugged terrain of the Ozark Mountains. From here the trail crossed a narrow rocky trail for 10 miles to the crossing at Lee's Creek. A new York reporter who rode the route to write a story said of this section. This part of the route, "I might say the road was steep, rugged, jagged, rough, and mountainous and then wished for more impressive words."

The coaches didn't have springs, but the cab sat suspended on leather straps. The cab, instead of bouncing up and down, would swing back and forth. Sometimes people departing the stage would have to get their land legs back before walking well at the end of the ride. The road between Park's and Brodie's Station reach an elevation of 1560 above sea level. 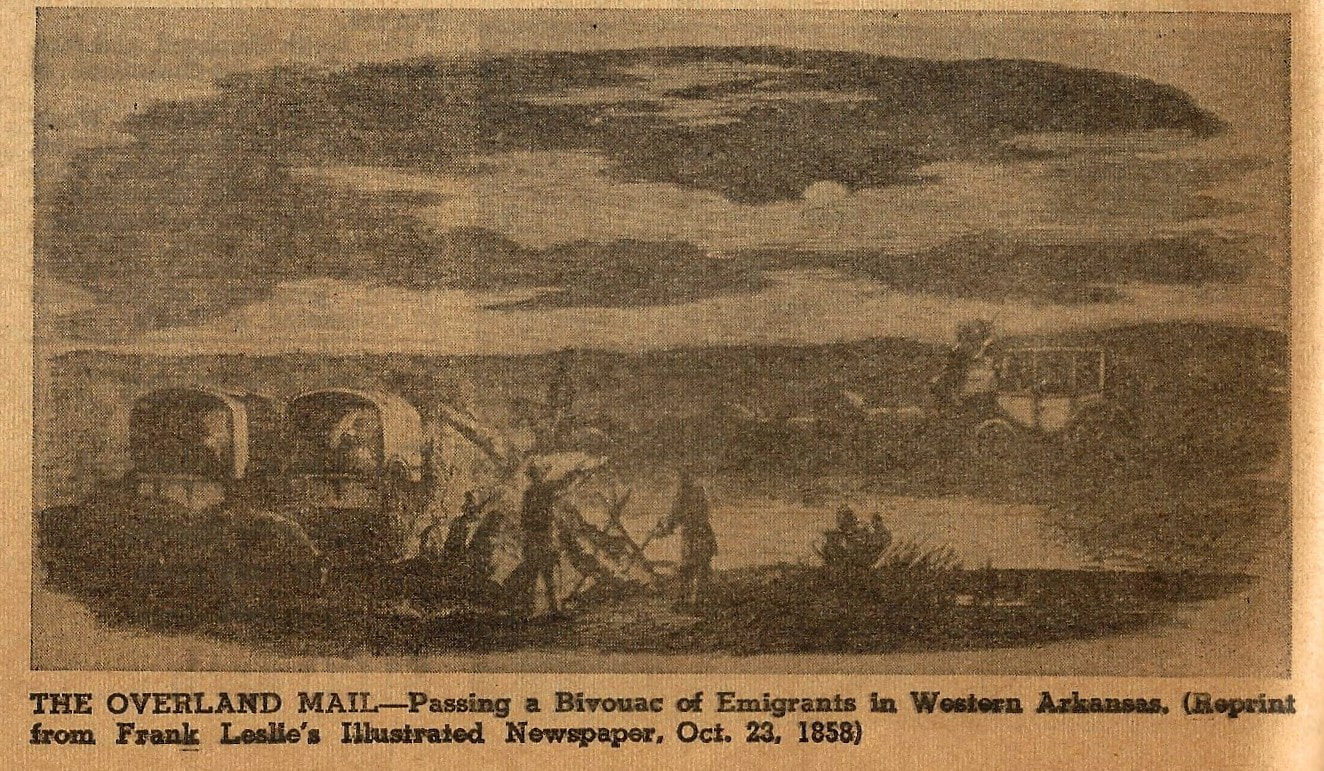 ​The next stop on this route was a Brodie's Station in Crawford County, located about twenty miles south of Park's Station. It was operated by Hiram Bodie. The station at that location was a two story log structure. This was about a mile from the Lee Creek crossing along the route. Once you crossed Lee's Creek the roads got a lot better for passengers.

From here the route went through Cedarville. Although this wasn't a mail stop, many times the coach would stop for refreshment. Two miles after Cedarville you came to Oosley's Station. It was run by George Oosley and had a house and store at this location.

From here you were off downhill to Van Buren. The road to enter Van Buren was called Signal Hill, the name coming from the stage blowing a bugle as they approached the station in Van Buren.

Next it was down to the ferry to cross the Arkansas River. The stage would cross the river on what resembled a flat raft. The ferry was propelled by two horses walking on a treadmill which turned paddles to propel the boat.

Once you were to the other side, you would find yourself in Fort Smith. The Butterfield Overland Mail station was located in the City Hotel at that time. This was the junction where a stage also came in from Memphis. The Overland Company kept a large stable with 50 to 100 horses. There were also additional coaches kept at this location. From Fort Smith, it was off to San Francisco. 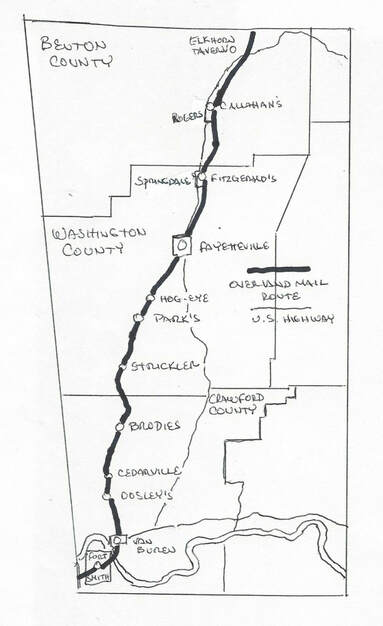