The Crown Hotel of Siloam Springs

Crown Hotel Approved for Historic Register
Article from The Interstate News, May 15, 1980
One hundred years ago this month [as of the writing of the article] ---on May 11, 1880 ---John V. Hargrove, the founder of Siloam Springs, sold lots 5 in block 3 of the original survey of Siloam Springs to Mr. Seth Hollingsworth to build what what is known today as the Crown Hotel.

Is was first named the Lakeside Hotel because of its close proximity to the lake in the Siloam Springs park just across the street. The present owners, Mr. and Mrs. Gordon Smith re-named the Hotel in 1946 when Mr. Smith and his parents bought it, on Dec 3, 1946, and has retained the name of Crown Hotel to this present date.

​The construction of the hotel started of late in the year 1880 and was finished and in operation by late 1881.

Bud Fenno, an old-time resident of Siloam Springs, was an eyewitness to the building of the hotel and told the present owners that "the hotel was not there in 1880 but it was in operation in 1882."

Mrs. Bess Tucker, who was a resident of the hotel for many years, said that her father was one of the brickmasons who laid the brick for the hotel and that he rode a bicycle to work from the Jaybird Community (one mile east of Eastgate Addition) and that he worked 12 hours a day laying brick for $1 a day.

She painted an oil painting of the hotel a few years before her death that the owners now consider priceless.

Mr. Hollingsworth died 3 years after the hotel was built and his wife then sold it to their daughter. It stayed in ownership of the Hollingsworth family for 27 years, until 1907, when it was sold to a Mr. Clayton.

A paid tax receipt was found in the abstract dated 1885 where the taxes on the property for that year amounted to $10.49.

Many improvements were made to the hotel during the time the Paces owned it.

The north 30 feet was built on to the original hotel building in the late 1920's. The lower floor was made into a very nice dining room while additional rooms were added above.

The Paces operated the hotel for about 10 years and then leased it and the garage next door, which is now a part of R. C. Henry Hardware.

It changed hands many times and finally the Paces took it over again in April 1930. The great Depression was now on and after a brave attempt to survive, the hotel was sold to satisfy paving taxes, real estate taxes, and various mortgages in 1935.

The Paces had operated the Hotel for 20 years. 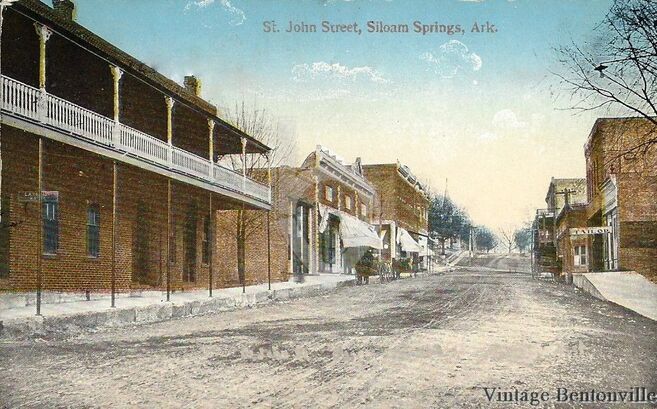 The Crown Hotel in 1902 ... note how the balcony has been preserved. What is now University Street was then known as St. James Street, and what is now North Wright was then Main Street.
From that point on the hotel had various owners until 1946, when Mr. and Mrs. Luther Smith and Mr. and Mrs. Gordon Smith bought it from the late Butler Hurlock, a local real estate man.

In January 1979 the present owners made application to the National Register of Historic Places, Dept. of the Interior, Washington D. C. and have since received a letter of acceptance.

In a letter from the Dept. the hotel was described as "one of the most significant surviving commercial buildings in Siloam Springs, pointing to an era when the city was among several health resorts developed in the Ozarks at the site of major and supposedly curative springs."

It is reported to have been the first permanent brick hotel in the area.

The Crown has alway been operated as a hotel. [It has since this article been converted to apartments].

"Main Street" ran alongside the west side of the hotel until the streets were re-named in the 1950's. That street is now North Wright street. Faded signs on the brick buildings north of the hotel indicate that at one time this was a thriving business district.

The National Register's report calls attention to two features of architectural significance. The first being the double-tiered porch that wraps around the building with turned supports and turned spindle bannisters.

The second distinctive architectural feature is the brick detail work around the cornice, where the brick is laid in a dental [sic] pattern and then recessed to form a row of diamond-shaped indentations.

Although the interior of the hotel has been remodeled to serve contemporary needs, the original carved stairway in the hallway remains and the original metal decorative ceiling in the lobby is intact although covered by a lowered suspended ceiling.

The original floor plan of the hotel remains virtually the same with few alterations.

The walls are double-thick clay brick joined together with lime and sand mortar.

There are conflicting stories as to where the brick came from to build the hotel. One story tells of an old brick kiln that used to be located about a half-mile south of the Kansas City Southern Freight Depot. Some believe this to be the origin of the clay bricks.

The late Tom Stahl, who served the City as City Clerk for many years, said that the bricks were brought by horse and wagon from Pryor, Okla.

In any event it took a great many bricks for the extra-thick walls.

The floor joists are a full thick 2 by 10 rough sawn yellow pine nailed in place with square cut wrought iron nails, The original flooring boards are 1 by 6 tongue and groove with hardly a knot in them.

An early photograph, dated around 1902, shows the building with several chimneys built on top of the cornice indicating that at one time there had been wood-burning stoves in each room. These were removed in later years when a boiler-fired steam system was installed.

Several years ago, at one of the annual Siloam Springs picnics, Mr. Smith met a man who said that he carried water from the spring  each afternoon after school and filled the bowls and pitchers in the rooms before the days of modern plumbing for 50 cents a week.

Recently while remodeling a room, an old razor blade was found in a crack in the plaster. It was unusally long and was hollow ground on both edges with a long slot in the middle. Smith sent it in to the Gillette Co. and asked what year it was made.

The company wrote back and said it was an unusual issue and not many of those kind were made. They dated back it in the early 1900's. 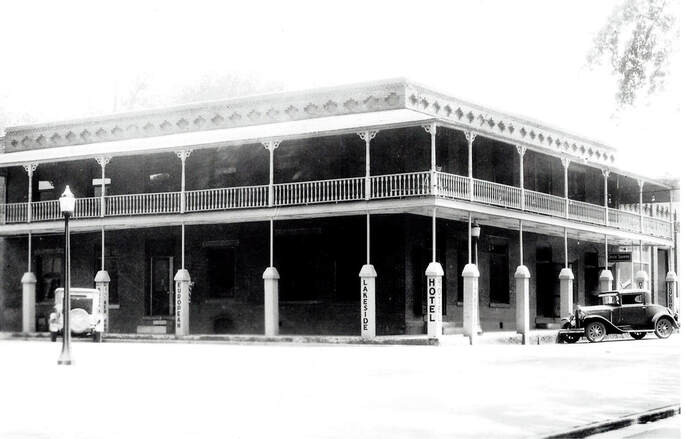 The Crown Hotel as it appeared in the 1920's
The Smiths have owned and operated the hotel continuously now for over 33 years and have re-painted and remodeled it many times but have tried to retain as much of the original architecture as was possible and still serve the needs of the public. They are very grateful to the people of Siloam Springs for their loyal support and patronage and pledge to continue to serve the local housing needs of the community. 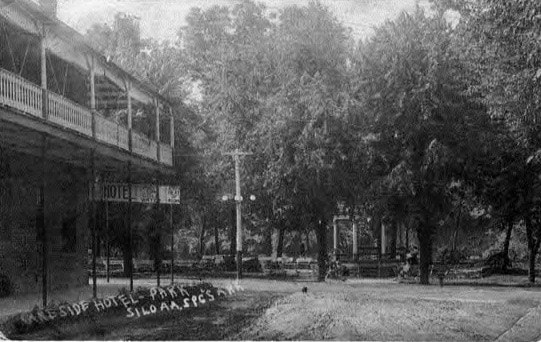