​The Industrial World  - Chicago, December 8, 1881
The Western Empire
(The Rogers segment of editorial notes on the "Beautiful Ozark Region of Northwestern Arkansas")
Rogers a town of 300 souls. It has grown up entirely since last January, has a dozen business houses, a live population and is one of the best towns in Benton county. Besides being a shipping center and trading point of growth and importance, Roger has a fine tributary country, abundant in productive resource, and a group of electric mineral spring, of great medical value, which are attracting many invalids and pleasure seekers and are likely, in the near future to rival the more famous spas of this remarkable region.

The representative trading men of this driving young city, are all full of energy and the right sort of enterprise, and are making the most of the situation. J. W. Brite is driving a large and successful trade in general merchandise and farm wagons, a prime business man, standing high and expresses great faith in the future of the town. 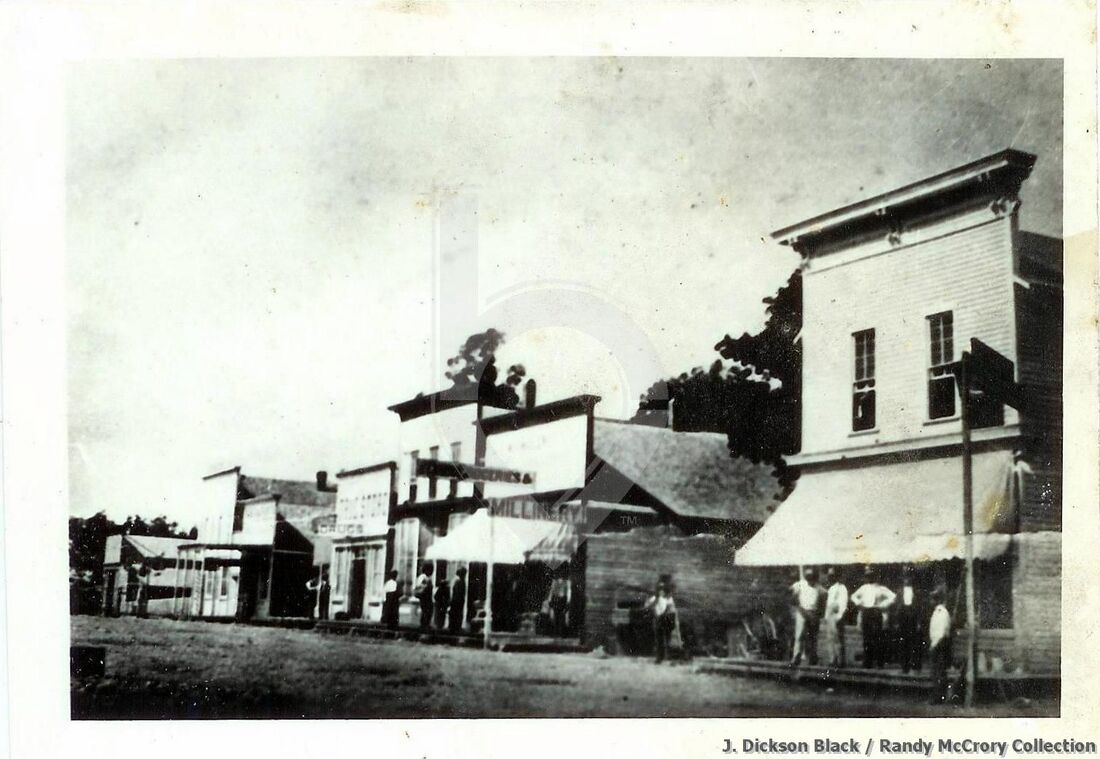 The business district of Rogers as it appeared in 1882. These were the first business buildings in the town. The picture looks south from Walnut Street down First Street.
W. A Miller, is also doing large and prosperous trade in general merchandise, is an able dealer, discounts his bills, is sound in bullion, was bred to trade and is one of the foremost dealers in the county.

J. W. Backerby & Son are carrying heavy stocks of hardware, plows, saddlery, harness and kindred goods, lead the town in this line, with a strong and rapidly growing trade, have ample means, are prime , energetic Illinois men and greatly please with the county.

J. A. Pirtle leads the drug trade with full stock in every line, has a large and rapidly growing patronage and is a live and enterprising dealer.
​
Rogers has a capital distributing trade, is the initial point for the Siloam branch of the San Francisco railwayand is destined to become a business point of much greater importance than its present population would indicate . There are several other fine towns in this county, which is so abundant in material resources as to be eminently worthy of the attention of home-seekers, farmers, manufacturers and capitalist. Indeed the entire territory encompassed by Washington and Benton counties is rich in promise to men of brains. and heart and gold men men of character and enterprise and good experience in the best practical way of life.