The Industrial World  - Chicago, December 8, 1881
The Western Empire
(The Bentonville segment of editorial notes on the "Beautiful Ozark Region of Northwestern Arkansas")

Bentonville, the capital town of the county, is centrally located in the county, seven miles west of Rogers, the nearest railway station, was laid out in 1846, has a population of 1200, three fine private schools and will soon complete a $10,000 public school building. It has too, a masonic blue lodge and chapter: lodge of Odd Fellows and Knights of Honor: a steam flouring mill, two live and influential newspapers, a bank and 15 mercantile houses, two tobacco factories, several mechanic shops and a substantial $50,000 court house. The town is well planned and substantially built, abounds in pretty homes and has  commanding location in the midst of a delightful and highly productive farm country whose charming alternation of prairie and woodland gives the happiest effects of contrast and whose productive resources, when fully developed, are equal to the support of a city of 5000 souls.

The immedediate wants of the town are a first-class hotel manager, a merchant flouring mill, more and larger tobacco factories and a half a dozen manufactories of woolen goods, farm implements and a score of other things in common use, for the manufacture of which the crude materials are found in grand measure through all this region and for which there is an illimitable market in  this and the neighboring States. The want of a railway too, is apparent, but this is soon to be supplied by the completion of the Lexington & Southern branch of the San Francisco line, which will give Bentonville and the county most admirable transportation facilities.

The business men of this city are thoroughly enterprising and progressive, carry handsome and ample stocks, are rapidly extending their trade. generally discount their bills of credit, are in a prosperous condition and have a laudable pride in the advancement of every commendable local interest. The entire population, 50 percent of whom are northern and eastern people, are united, energetic and ambitious workers for educational, social, moral and material progress, and express, in grand measure, the best elements of a brave, self-reliant, well disciplined and hospitable community. There are few prettier towns of its class in the Southwest; none with a fairer or richer tributary region and certainly none that offers more to the expectant and self-sustaining home-builder, trader and manufacturer than this charming little city of the Ozark Plateau.

The mineral springs, located just on the border of the town, promise much for its future prosperity. They are prettily situated, have rare medicinal properties, are improved with baths and environed with delightful grounds which are being laid out in ample residence lots, walks and drives, are known to have all the healing virtues of the famous neighboring Eureka Springs and are already becoming a popular health and pleasure resort. 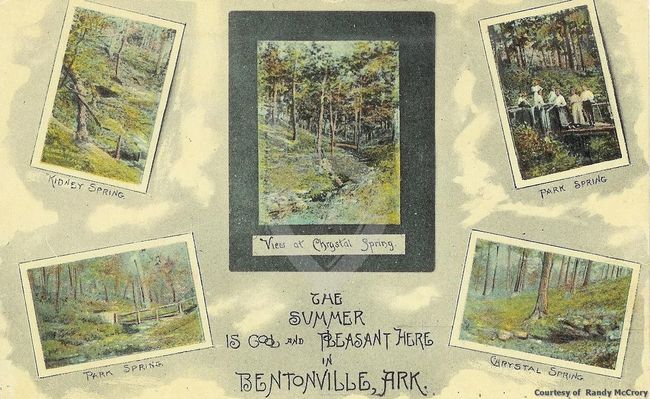 Footnote: This article talks about the need the need of someone to manufacture wool goods. At this time there were 13,300 sheep in the county, which produced 46,000 lbs. of wool.