​This story's focus is the many train depots that have existed in Benton County over the course of the years. At one time there were four major train lines running in Benton County, with two running north and south, and two running east and west. The east-west lines no longer run, and only a few of these train depots still exist today. There may have been other depots, but those shown are the only ones for which images could be found. 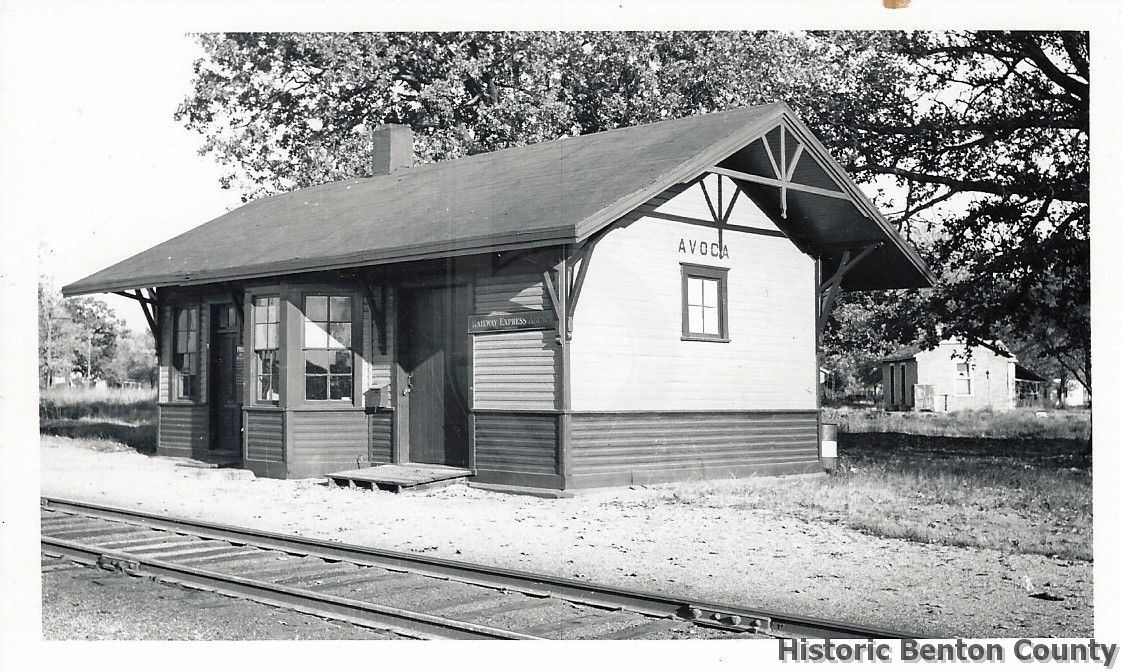 ​Avoca - This depot was along the Frisco Line. In 1881 a Mr. Albert Peel gave land to the Frisco for a depot and a side space for loading cars, a stockyard, and a tie yard. At that time Mr. Peel had a store in Brightwater which he moved to the new town of Avoca along the tracks.

​Bentonville - When the Frisco put the first train line through Benton County, it didn't run through Bentonville. Soon after the Frisco line was established, Bentonville started to build their own rail line called the "Bentonville Railroad Company" in 1882. The train originally arrived in Bentonville just southeast of the Bentonville square, before a depot was built on south Main Street. When the train first arrived, it's been said that there was no depot but just a platform. However, in this photo it appears there was some type of depot at that location. 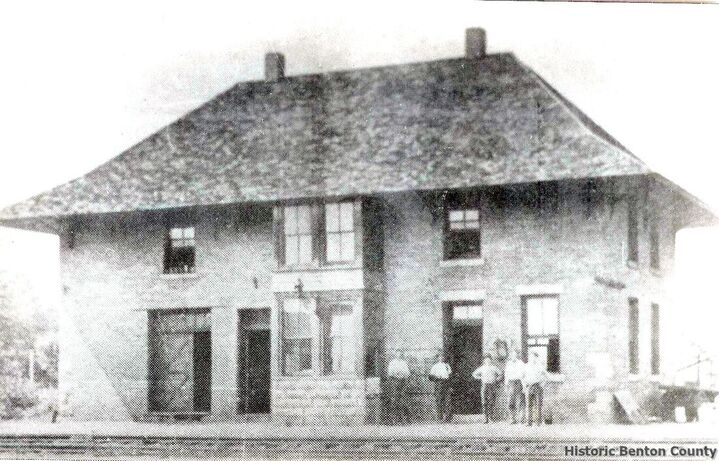 Bentonville - In 1898 the railroad was purchased and renamed the Arkansas & Oklahoma Railroad. At that time the old worn out track was replaced by heavier rail. In 1899 they built an impressive two story train depot out of brick and native stone. The line was to be extended from Bentonville to Gravette and eventually to Grove, Oklahoma. 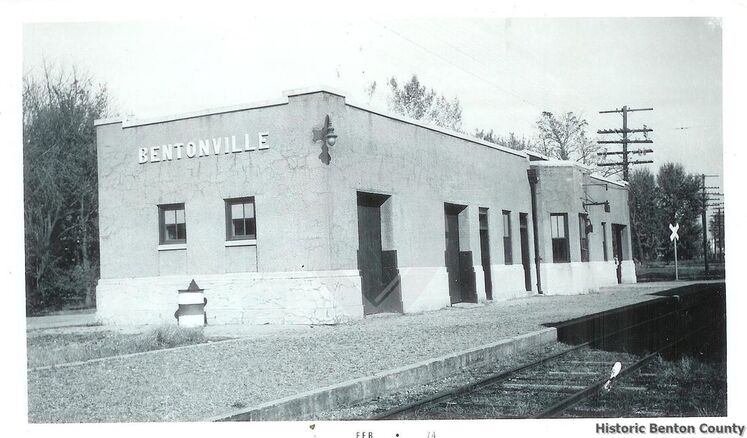 Bentonville- In 1900, the Frisco bought the train line. The depot was busy in the early 1900s with people coming to visit the Bella Vista resort. After World War I, the depot wasn't much used. In 1925, the second floor was taken off the depot, and the building eventually fell into disrepair. In the 1980s the building was remodeled and is now used as office space. ​ 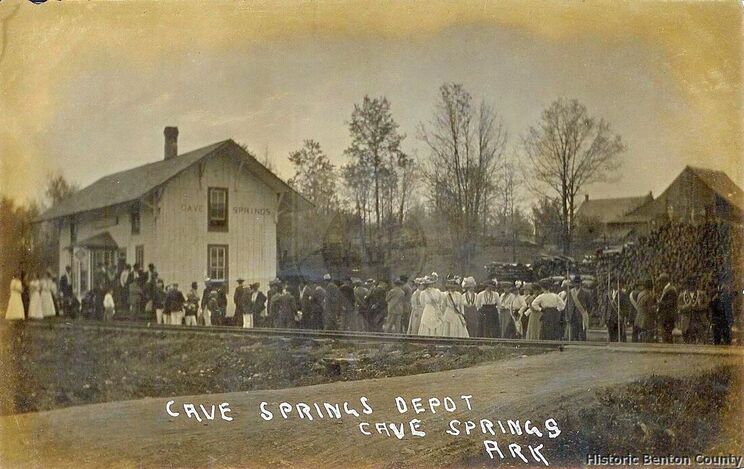 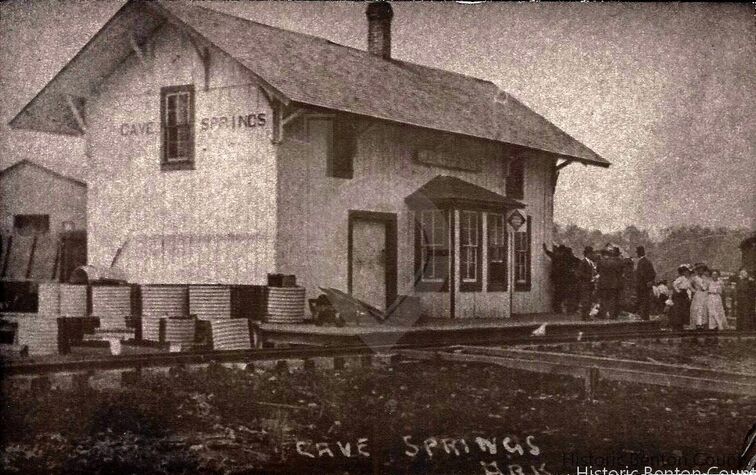 Cave Springs - Most of us today wouldn't think of Cave Springs as a railroad hub, but in 1906 the Rogers Southwestern railroad was extended to Cave Springs. The same year, rail was laid as far as Springtown. The line was to run from Rogers to Siloam Springs via Hazelwood, Cave Springs, Springtown, and Highfill. By 1907 the railroad company was reorganized under a new name, the Arkansas, Oklahoma & Western railroad. It's not certain when the depot was completed, but is believed to have been erected at about the same time the rail was laid. The upper photo may have been taken at the train depot's dedication. The line went on to run to Fayetteville and later to Monte Ne and points east. The name of the line was later changed to the Kansas City & Memphis line. The railroad only operated until 1918, and the line was then taken up. The remains of the depot may still exist in Cave Springs. 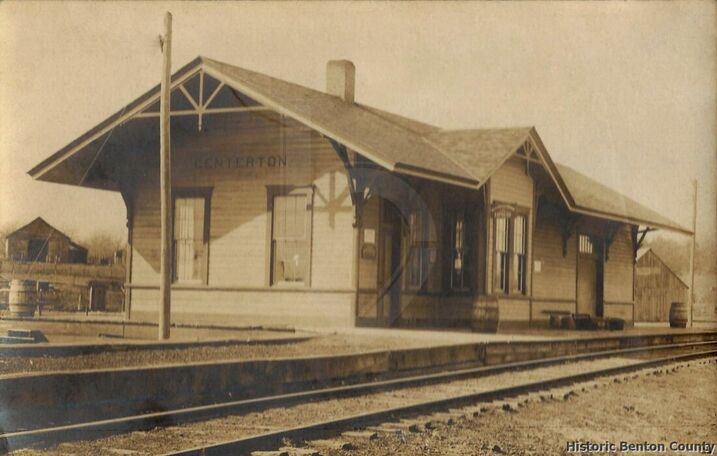 Centerton - This train depot was on the Arkansas & Oklahoma, and later the Frisco rail line, which ran from Rogers to Gravette, then on to Grove, Oklahoma. The A&O R. R. at one time showed a stop at a community called Rice. A few years later the name was changed from Rice to Centerton. This depot was likely completed in the late 1890s or early 1900s. 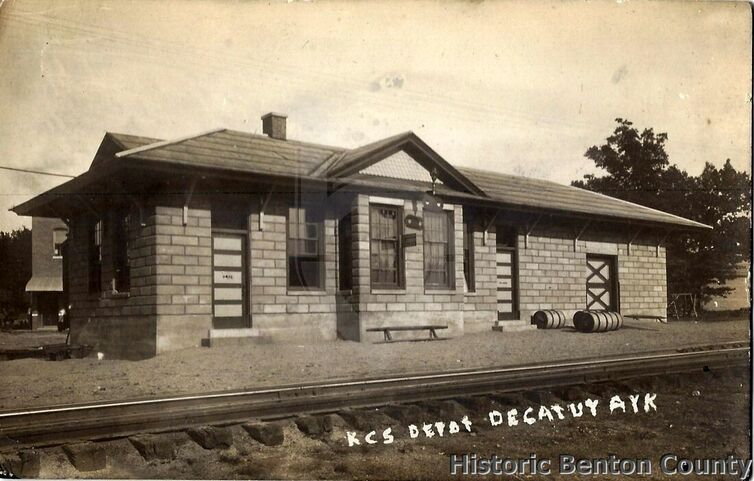 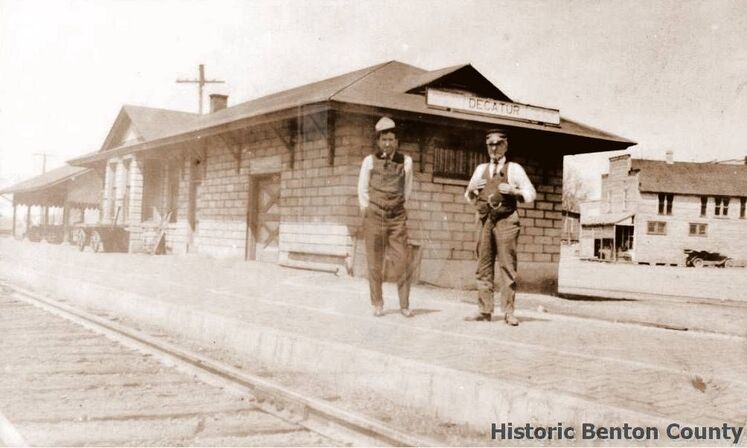 Decatur - Originally the Kansas City, Pittsburg and Gulf line ran through Decatur. The name has since been changed to the Kansas City Southern.  The first train depot in town was built in 1894 and was a wooden structure with a strawberry shed on the property. In 1908 a fire destroyed the depot but spared the strawberry shed. Unfortunately, we have no images of the earlier building. In 1910 a new building was put into service at a cost of $1,855.19. This same depot is what you see in Decatur today, now turned into the community museum. In more recent years, the outside of the building has been renovated. 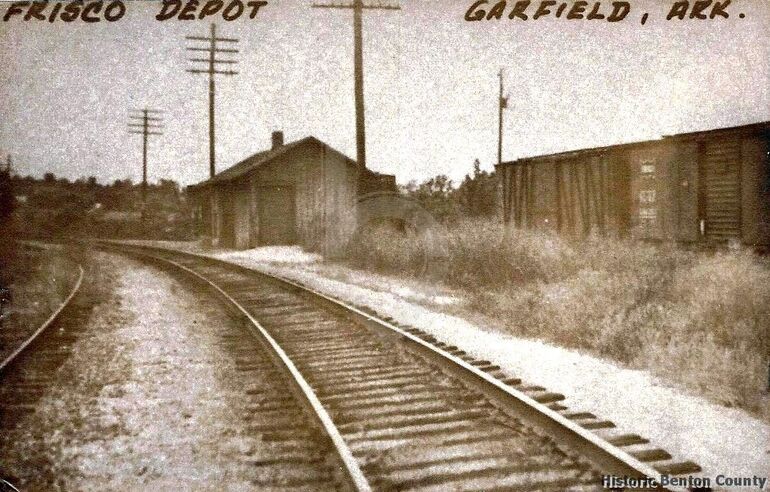 Garfield - The depot here was located along the Frisco railroad. The area of Garfield was originally called Crowell or Wilks. Sometime around 1882 or 1883 it was renamed after President Garfield. The depot in town was built in 1884. Items shipped out of Garfield were lime, dried and fresh fruits, timber, railroad ties, and fence posts. 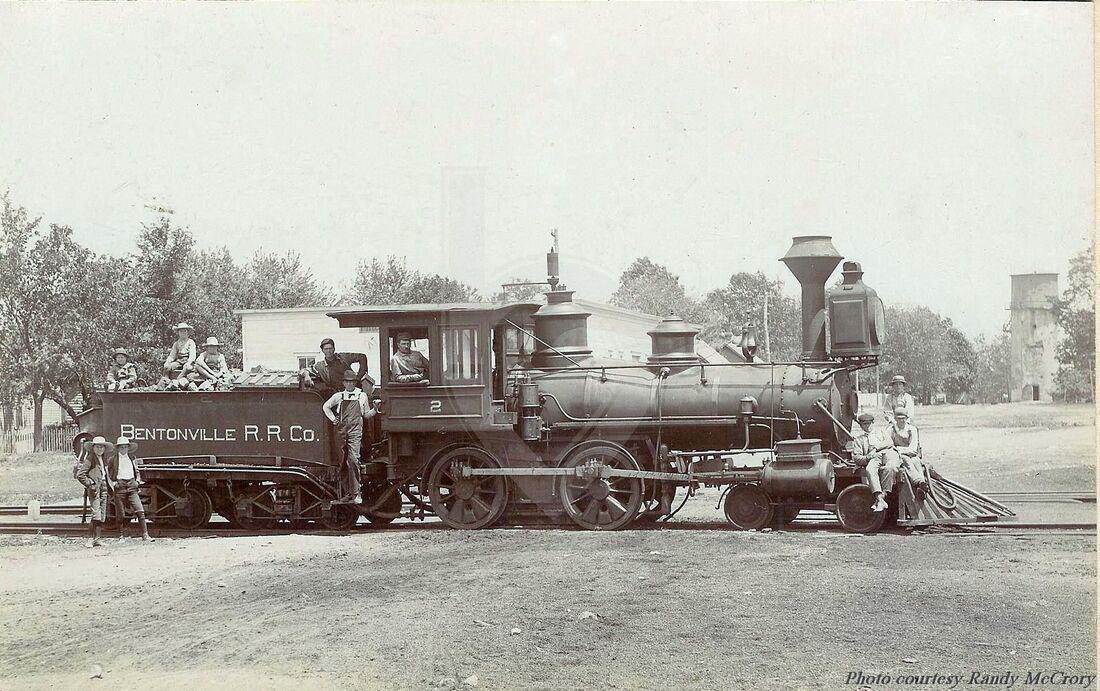 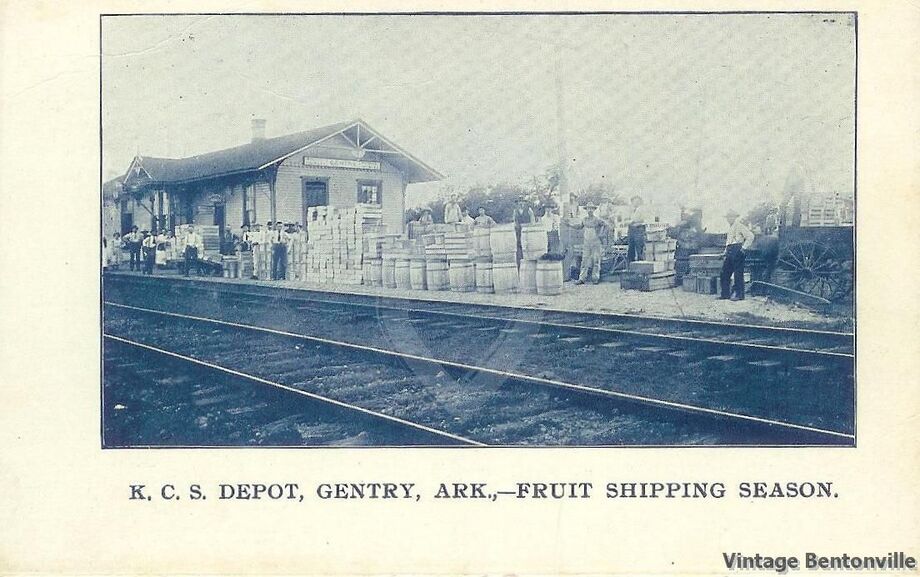 Gentry - This town was originally called Orchard. When the Pittsburg & Gulfway railroad (now Kansas City Southern) came through, the town's name was changed to Gentry in honor of the second vice president and general manager of the railroad. The railroad came through here in 1894, but the town was not incorporated until 1898. The date when the first depot was built is uncertain, but it was probably about the time the railroad first came through Gentry. The town had become a financial center for a vast fruit growing industry. 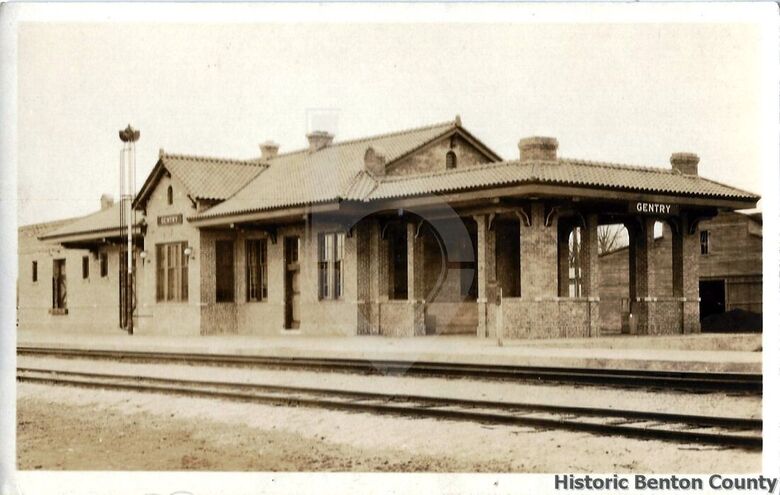 Gentry - In 1926-'27 the Kansas City Southern built a new brick depot in Gentry. Passenger trains came through Gentry until 1964. Later in the 1960s the depot was torn down. 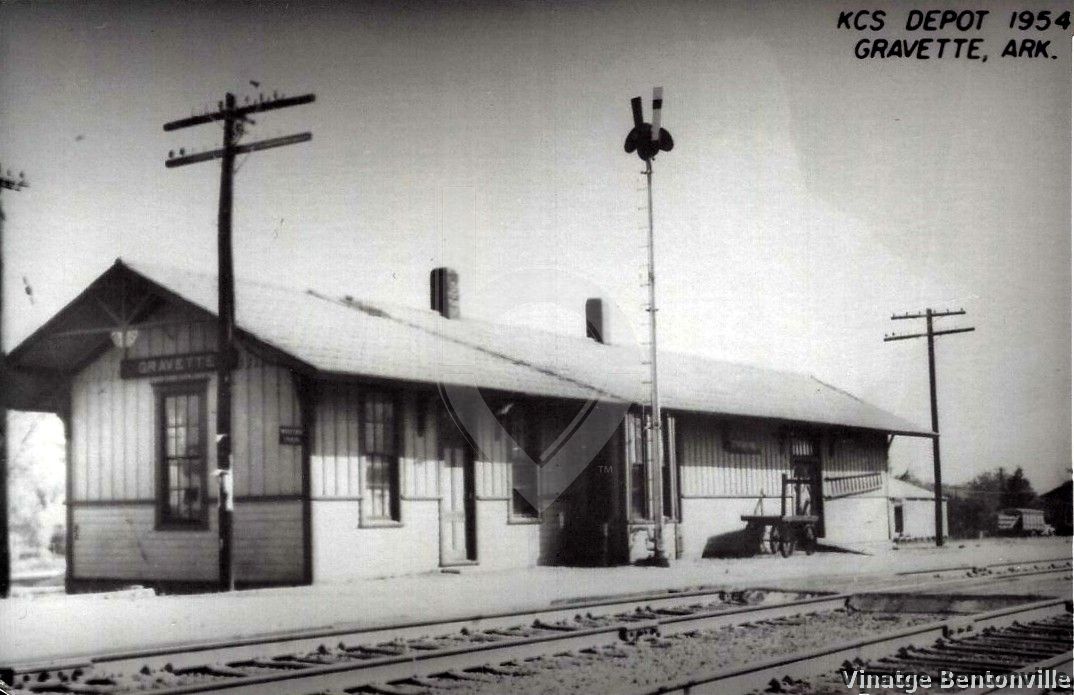 Gravette - Like a lot of towns, Gravette first came into being when the Pittsburg & Gulfway railroad (now Kansas City Southern) was built through the area in 1894. The right of way for the railroad was donated by Ellis T. Gravett, who would also lay out the town site for Gravette and for whom the town is named. The original spelling (and one that you still sometimes see in town) was Gravett, consistent with the founder's name, but the "e" at the end was added at a later time.

A train depot was built at the time the railroad came through. Close by was the town of Nebo, which like a lot of towns, moved to where the railroad was located. In 1899 a second train line, the Arkansas & Oklahoma railroad, came to Gravette. The line ran from Rogers to Bentonville, then through Gravette and on to Grove, Oklahoma. In 1900, the line was sold to the Frisco Railroad. 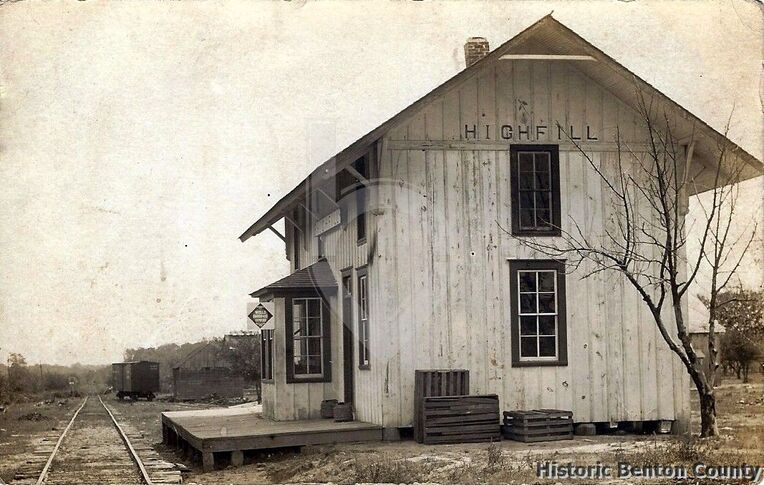 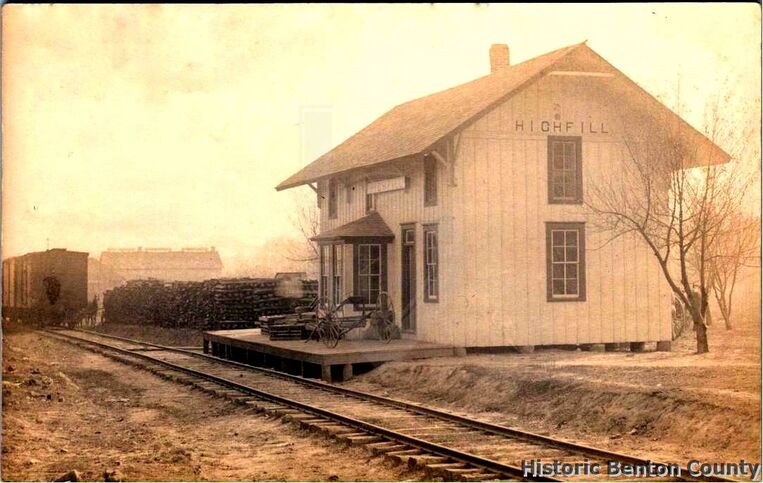 Highfill - The Highfill depot was along the Kansas City & Memphis line (also known as the Rogers Southwestern and the Arkansas & Oklahoma & Western Railroad). The community of Hoover sat just a little south of what would become Highfill. When the line missed Hoover, a lot of the town of Hoover moved closer to the train line in the newly established town of Highfill. The community of Highfill was platted in 1906 and a railroad depot was built, along with a loading yard for shipping apples. The rail line went bankrupt in 1914, and line was taken up in 1918. 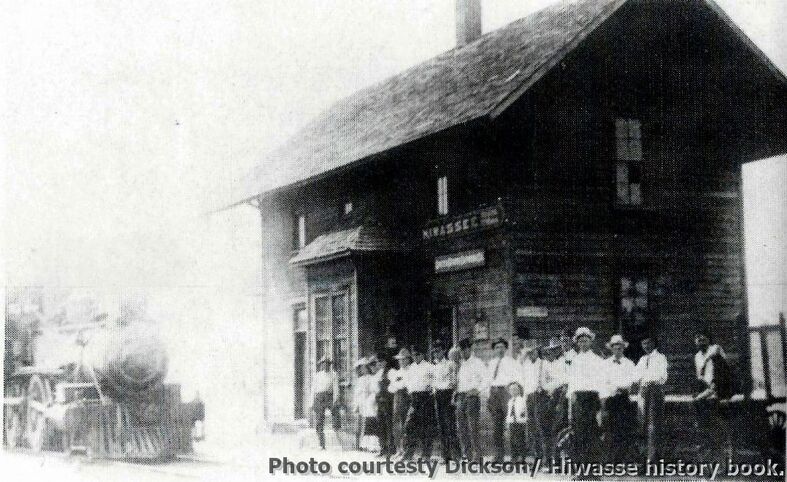 Hiwasse - was along the Arkansas & Oklahoma line, later to become a branch of the Frisco railroad. The train line came through the area in 1898 and the town of Hiwasse was established. The nearby towns of Old Town and Dickson relocated to Hiwasse on the new line. The name Hiwasse was given to the town by one of the major investors of the railroad, who had attended Hiwasse College in Tennessee. This rail line ran from Rogers through Bentonville and on to Gravette before ending up in Grove, Oklahoma.  A lot of fresh and dried fruits were shipped out of the Hiwasse depot. In 1940, this line was abandoned. In that year the steel was taken up to support the war effort. 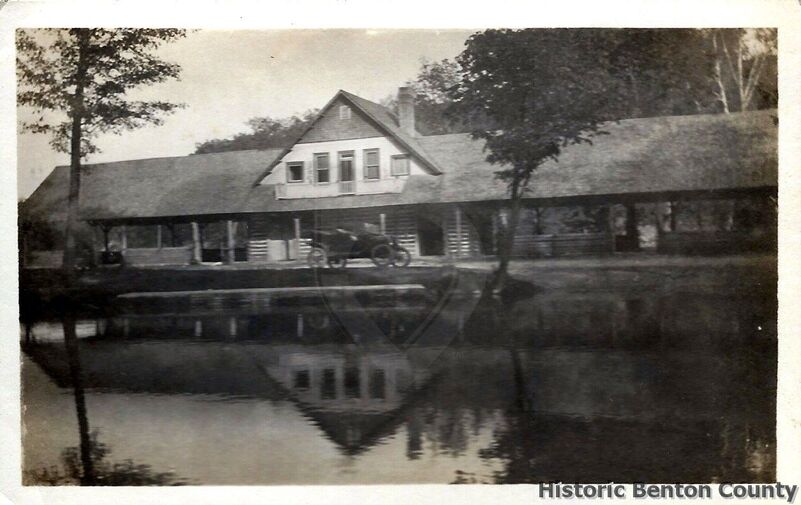 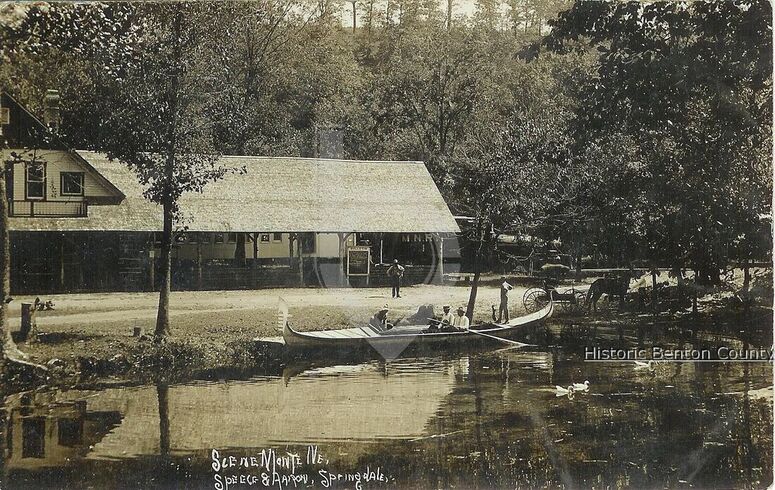 Monte Ne - Coin Harvey bought a large area of land in what was known then as Silver Springs in 1900, turning it into a resort which he renamed Monte Ne. The Monte Ne railroad was a line that was built from the Hazelwood spur near Lowell to Monte Ne in 1902, because it was the best way for Mr. Harvey to get his guests to the resort. The train depot, which was built at the same time, was a two story tall, mainly log construction depot. It had two open air waiting areas for guests, one at each end. The Monte Ne railroad went bankrupt by 1910, and the line was purchased by the Arkansas, Oklahoma & Western railroad (later known as the Kansas City & Memphis). The plan at that time was to expand the line to Eureka Springs and then across the Ozarks, but that rail line also went bankrupt a year later in 1911. Passenger service was discontinued until 1914. In 1912, the Ozark Land Company had built a trestle bridge across the White River to Piney for hauling timber out of that area. By 1918 the line was abandoned and the tracks taken up. 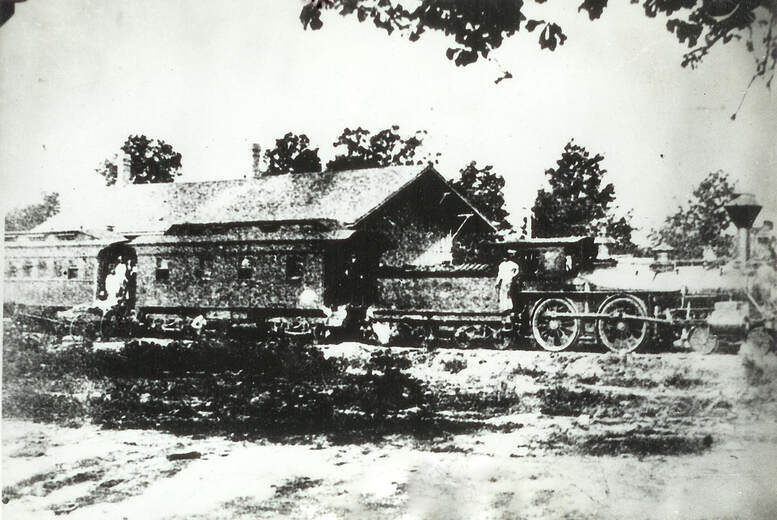 Rogers- The original right of way for the town of Rogers was given to the railroad by B. F. Sikes who laid out the original town site. The first passenger train arrived in Rogers (pictured above) on May 10, 1881. Behind the train was probably the first train depot in Rogers. The city was named after Capt. C. W. Rogers, who was the general manager of the Frisco at that time. By the end of 1881, Rogers boasted a population of 600 people. The first depot was located at First and Chestnut. 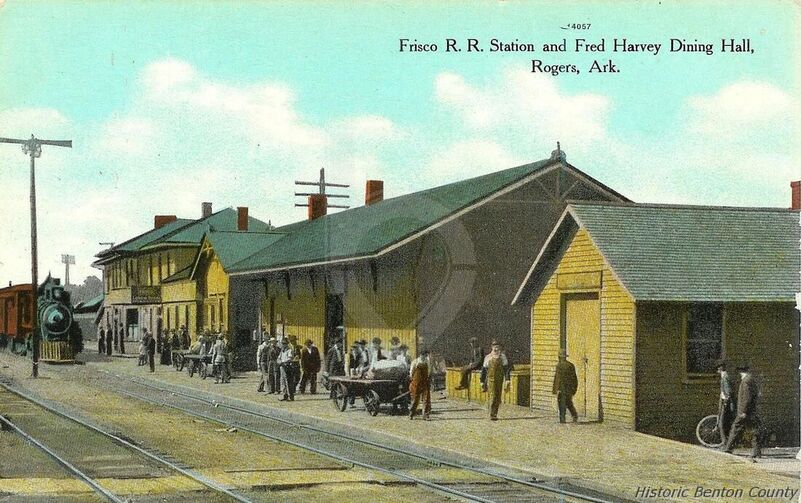 Rogers - The second train depot was built between Elm and Poplar Streets, on South 1st Street. Sitting just south of the building, the Fred Harvey Company built a two story framed dining hall. The dining hall employed one of the best Italian chefs in the business. These buildings were damaged several times by fire. Eventually both the train station and dining hall burned down. 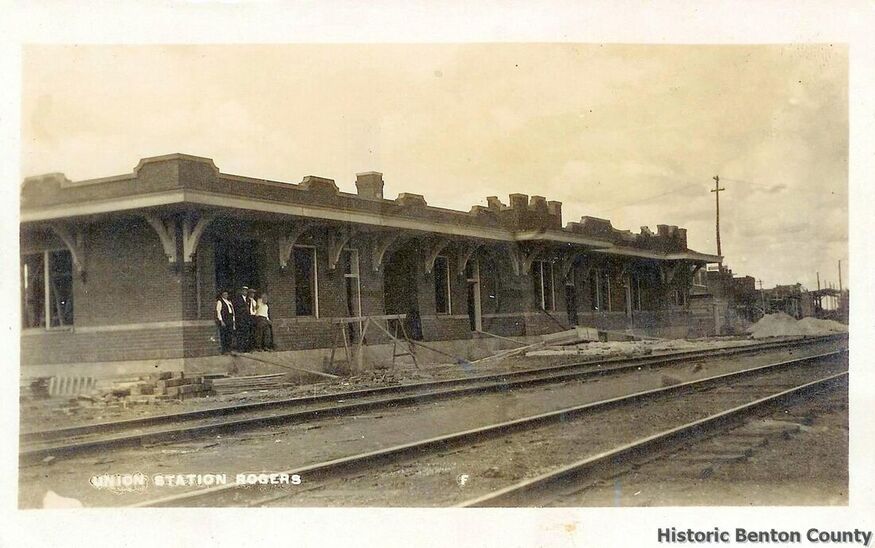 ​Rogers- A new depot was started in 1914. The above photo shows the depot being built. You notice the depot is called a Union Station since it was a joint venture of the Frisco and the Kansas City and Memphis railroads. By 1918 the KC& M had stopped operating. This depot was located at 1st & Cherry. 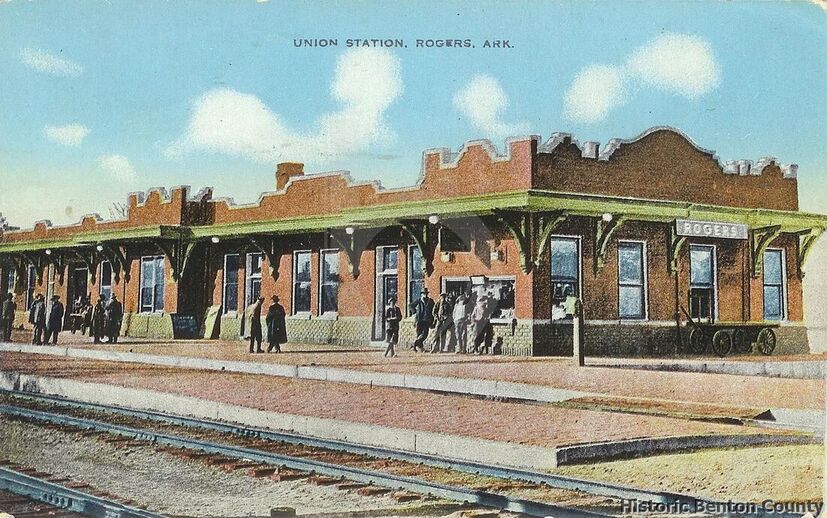 Rogers - The depot acted as a hub for all the railroads in Benton County, except the Kansas City Southern railroad. The Frisco, Arkansas & Oklahoma, Kansas City and Memphis railroads all came into this depot at one time. The Interurban from Bentonville would drop its passengers off very close to the depot also. Passenger service continued up until 1965 when its operations ended. The building stood pretty much empty for a number of years. In August of 1977 the train line had the depot torn down. 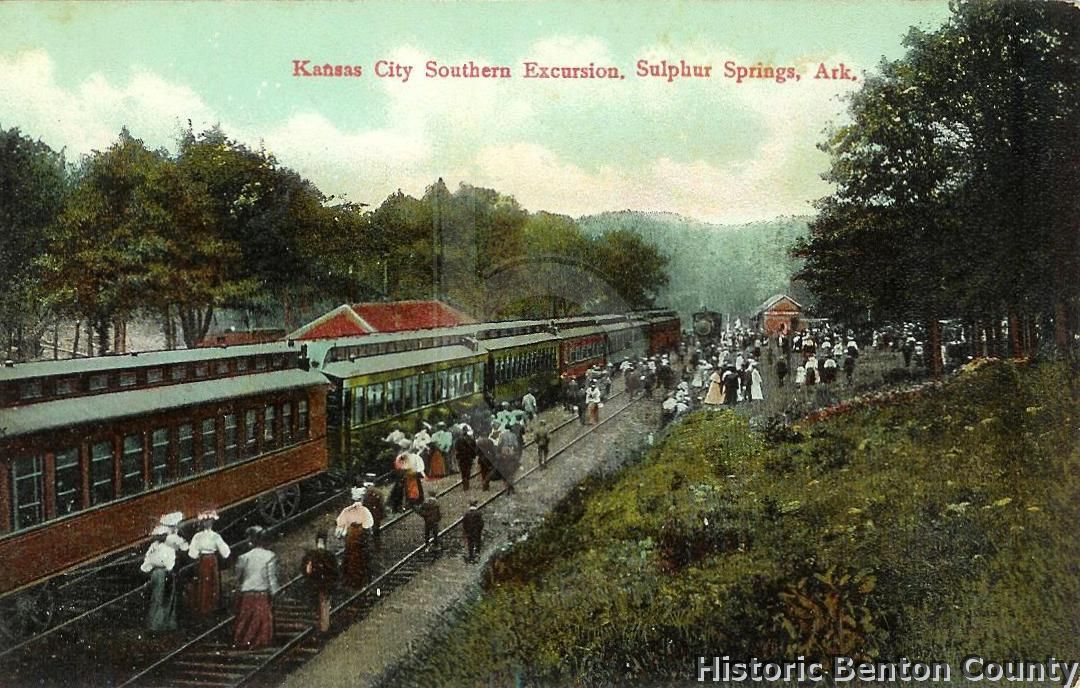 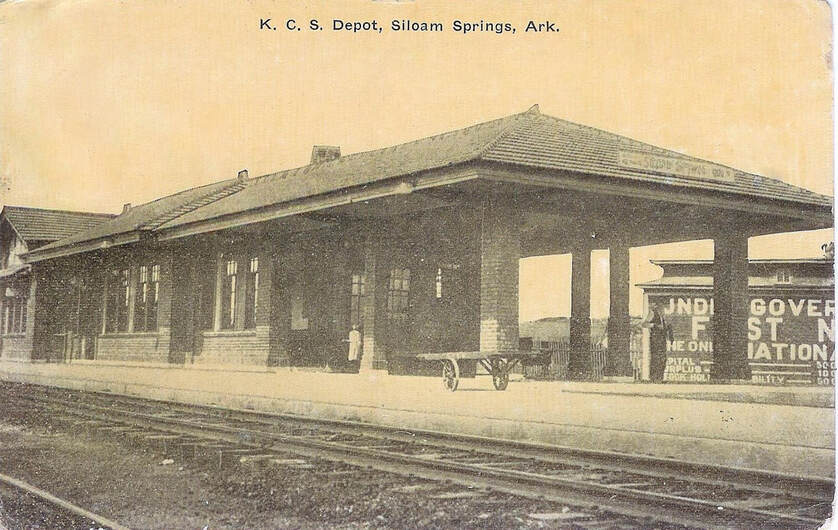 Siloam Springs - In 1915, the above depot was built to replace the old depot. This depot was used until the end of passenger service. In 1991, this depot was slated to be moved for the Welcoming Center entering into Arkansas on highway 412, but before it could be moved, the structure caught fire and burned to the ground. 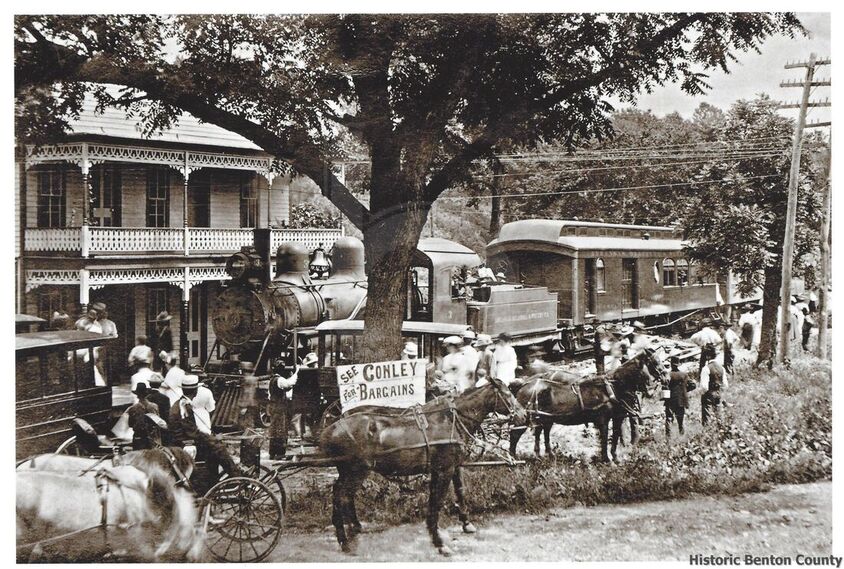 Siloam Springs - The town had two railroads that went through or to Siloam Springs. The one not yet mentioned was the Kansas City & Memphis line (also known as Rogers Southwestern, Arkansas, Oklahoma,& Western Railroad). This train line was built into Siloam Springs in 1906 and 1907 and maintained its own train depot shown behind the train engine in the photo above. This line ran into financial problems not long after being built. The track was taken up by 1918. We know this building was still there in the early 1920s, but was gone by the mid 1930s. 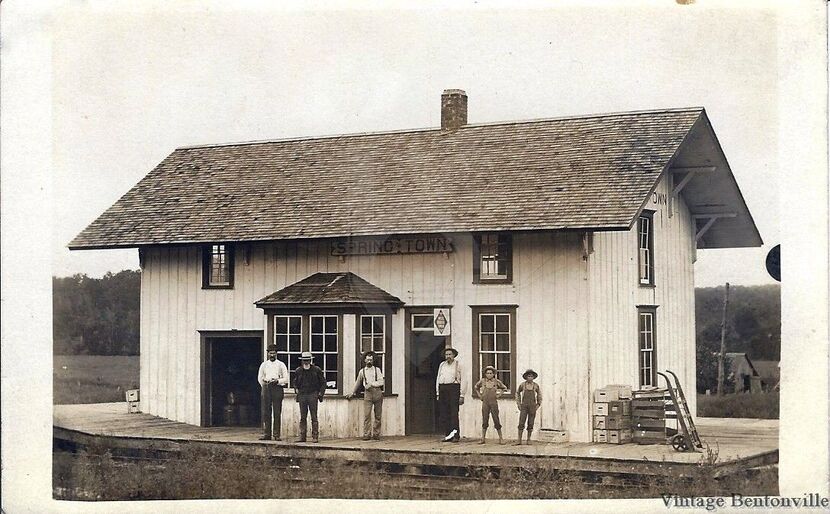 Springtown - The town was originally called "Old Hickory."  In 1906, the Arkansas, Oklahoma & Western railroad (sometimes called the "all out and walk" due to a lack of reliability) came through Springtown. The depot was probably built about the same year. It was on the line between Rogers and Siloam Springs and was later known as the Kansas City and Memphis Railroad. 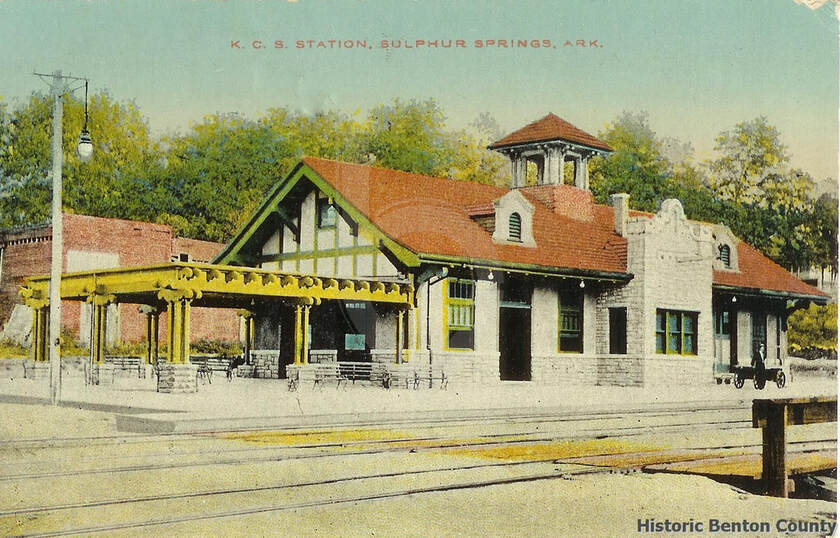 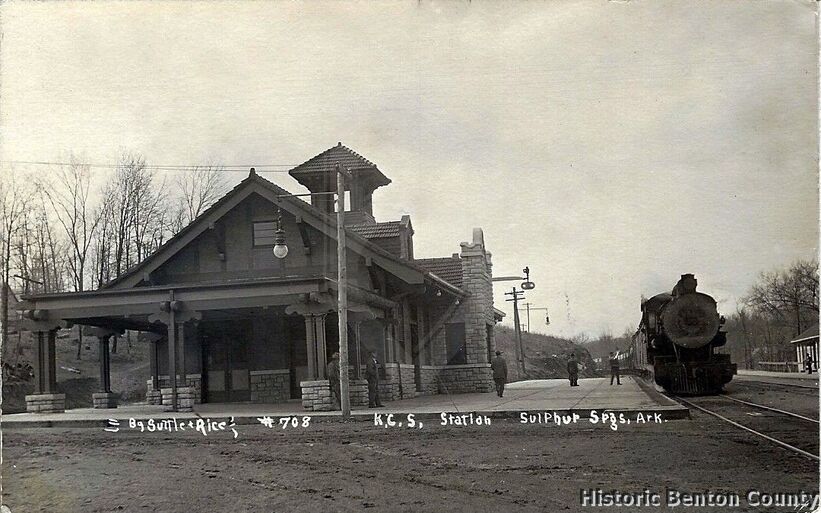 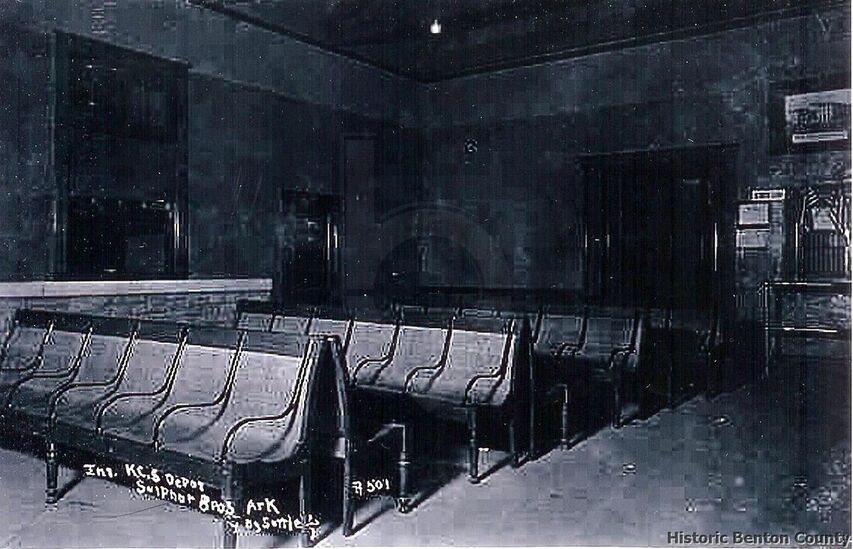 ​Sulphur Springs- Charles H. Hibler was the original owner of the springs, park and surrounding property on which much of the town was located. The town was laid out in 1885, and it was developed as a resort town. The nearest rail line at the time ended in Southwest City, Missouri, 10 miles away (Bentonville being 18 miles). In 1891, the Kansas City, Pittsburg and Gulf (later becoming the Kansas City Southern) came to Sulphur Springs. At that time many new businesses and hotels opened up in town. The train depot was razed in 1977.