True Tales From The Hills - Sam Williams' Dog
By Nolen Bulloch
​ from Benton County Democrat May 28, 1936, now the NWA Democrat Gazette
It was that stray hound dog which Sam Williams had told his boys to drive off, that ruined one of Benton County's earliest industries.

That dog ruined Sam Williams' grist mill, and scandalized and nauseated many a household among the early hill settlers.

In 1840 Samuel Williams, with the zest characteristic of many a youth of that day, and wanderlust pounding in his breast, decided to leave Tennessee.

Many a neighbor had returned to the Tennessee hills bringing back glowing stories of Northwest Arkansas. Arkansas, a state in its infancy. Only four years in the Union.

So Sam Williams came to Northwest Arkansas. In 1842 he obtained an eighty-acre homestead a mile and a half west of the present city of Bentonville. The grant was signed by President Tyler.

But this is not the saga of Samuel Williams. It is the resurrection of the story of the unnamed hound dog

A large spring fauceted its way out of one of the hillsides on the Williams place, and the output volumned its way into Sugar Creek.

Samuel, an enterprising man, saw the need of a grist mill. He had the water power, the location. So the Williams mill was built.

Business flourished. There was no debatable AAA's or other governmental and state agricultural intricacies in the babyhood of Arkansas.

Neighbors and settlers from many a mile trooped from their hill homes to have their corn ground.

Samuel Williams' grist mill was a favorite gathering spot. Even the ominous clouds, to pour forth their wrath in such a short period, desolating a nation, cast only shadows over the mill-side conversations. 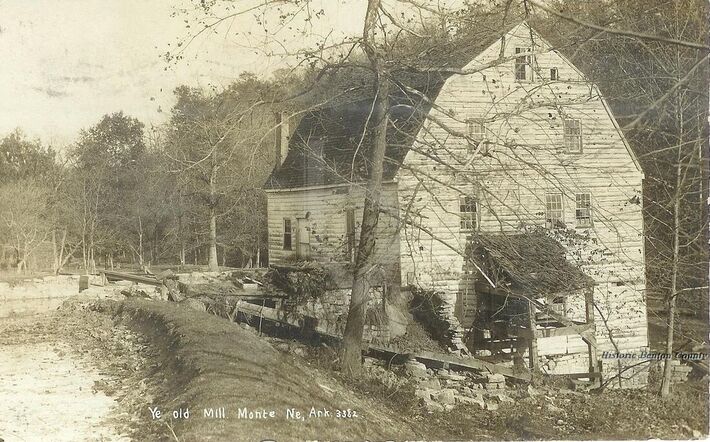 This could be what the mill looked like. This image is of the mill at Monte Ne.
​Arkansas, now reaching a manly age, is the loser that these conversations could not be recorded.

It was during one of the gatherings that the strange hound dog appeared. The story of the dog has been protected faithfully and undisputedly by descendants of Samuel.

Although a kindly man, Samuel felt he had enough dogs; and after the hound begun to assume possessive rights toward a permanent home, the mill master decreed its punishment,

But the dog having garnered the crumbs of, perhaps, its best lodging, was no easy matter to be put into enforced exile.

Then suddenly it disappeared.

Samuel, himself, had not noticed it. A sharp-eyed neighbor noticed it, during one of the mill-side conversations, and called his attention to it.

"Ed," Sam sharply called his son, "Have you seen that stray dog about?"

The boy ambled slowly over to the group. His head was lowered to the ground.

Ed, as he recited many times afterwards, knew the torments of wrath were about to befall upon him.

"Where is he?" Sam demanded.

​"Well sir," Ed's voice trembled, "He got ground up with the corn last week."