Village Of Cross Hollows Remains Only In Memories

Cross Hollows served as the trading point for the sparsely settled section prior to and after the Civil War, but with the establishment of the town of Rogers, it was soon abandoned.

While there are a few old-timers who remember what Cross Hollows was like, it is known that it had a post office, a liquor distillery, a tavern, and possibly a store or two and a few homes.

B. F. Sikes, who owned the land on which the town of Rogers was platted, was the postmaster at Cross Hollows. When soon after the town was established, the post office was moved to Rogers and Mr. Sikes continued as postmaster.

Cross Hollows came into historical prominence during the Civil War when Gen. Samuel Curtis, commander of the Union forces at the Battle of Pea Ridge, established his headquarters there prior to the battle.

Gen. James McIntosh, who commanded a Confederate force at the Battle of Pea Ridge, and who lost his life in that engagement, established quarters for his troops at Cross Hollows during the winter of 1861-62.

The valley at that point was considered by military strategists of both opposing armies to be of strategic military importance. After the battle, there were no longer large forces on either army in the area to contest for its control, although it may have been the site of troop encampments before the end of the war. 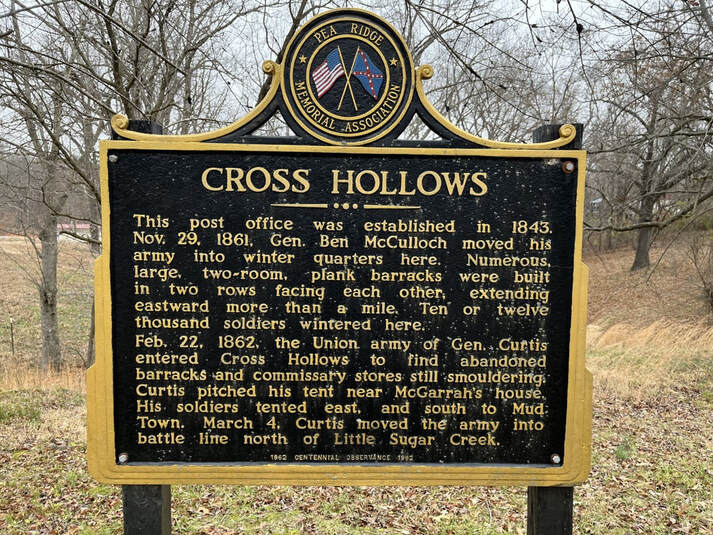 A plaque that is located on the old "Wire Road" located between Rogers and Lowell gives us the location of the camp site and some of its history.
The war correspondent at the New York Herald, who accompanied the Union forces during the Northwest Arkansas campaign, wrote an interesting sketch for his newspaper in which he described the appearance of the country, and went into some detail concerning its military aspect.

"This is now a famous locality and was selected by the Confederate chieftains of Missouri and Arkansas as peculiar to their mode of warfare," the New York Herald correspondent wrote.

"It is situated in Benton county, Arkansas, on the road from Springfield to Fayetteville and Fort Smith, about 16 miles north of Fayetteville, and 16 miles south of the line between Arkansas and Missouri.

"Cross Hollows was so named from the fact that three ravines, or "hollows" in the Arkansas vernacular, intersect at this point. The road passes through one of the three ravines in a direction nearly due south. The ravine is from 75 to 100 feet in depth, and the width varies from 10 to 100 rods. In some places it is barely wide enough to permit the passage of an ordinary farm wagon.

"The sides are abrupt, though not precipitous, and consist of loose earth mingled with cobblestones and fragments of broken rock. The length of this ravine is about a mile and a half.

"To the north, the approach is by an abrupt descent from a plateau known as Oak Flats, and level area three or four miles across, and covered with scrub oaks and blackjacks, with an occasional tree of considerable size.

This ravine is intersected about midway by another ravine crossing it at right angles, through which a small creek meanders to the eastward. Still another smaller ravine interesects these with a general course from northeast to the southeast. These ravines are smaller in depth and character, and the sides of all have the same general peculiarities. 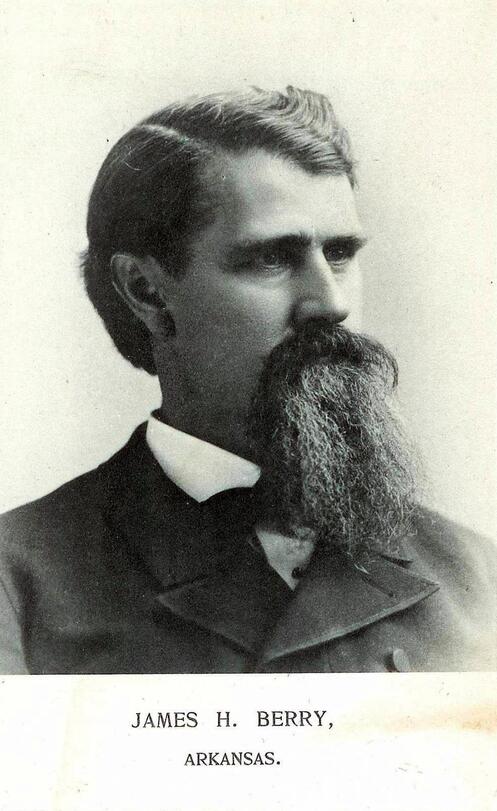 "The radiation of these six chasms forms a equal number of spurs, or promontories, all pointing toward a common center, and varying in height from 80 to 100 feet.

"A light battery placed on either of these spurs can pour enfilading fire through two of the approaches. All of these hills are covered with a growth of timber similar to that on the plateau. The trees are sufficiently scattered to permit wagons or field guns to move among them with little difficulty.

"At the point of intersection of the ravines is a level cleared space of several acres, in which the winter quarters of McIntosh's Confederate forces were erected. These huts were of logs, boards and turf, and completely filled the cleared area. One of the finest springs in the Southwest gushes from the point of the first promontory east of the road and south of the open space, affording sufficient water for all the troops that can camp in the neighborhood.

"From this sheltered position and its fine spring, Coss Hollows has long been a favorite place of emigrants and travelers upon the southern overland route."

The Herald's correspondent made no reference to any permanent settlement at the point.