War Eagle And Its Four Mills

War Eagle And Its Four Mills
Sylvanus Blackburn came to the War Eagle area in 1832 seeking open frontier in the west. Leaving his wife behind in Tennessee with her parents, he found the War Eagle valley with its abundance of water, timber, wild game, and good soil. He homesteaded 160 acres of land in the valley. The first winter he spent hewning logs for the home he would later build. 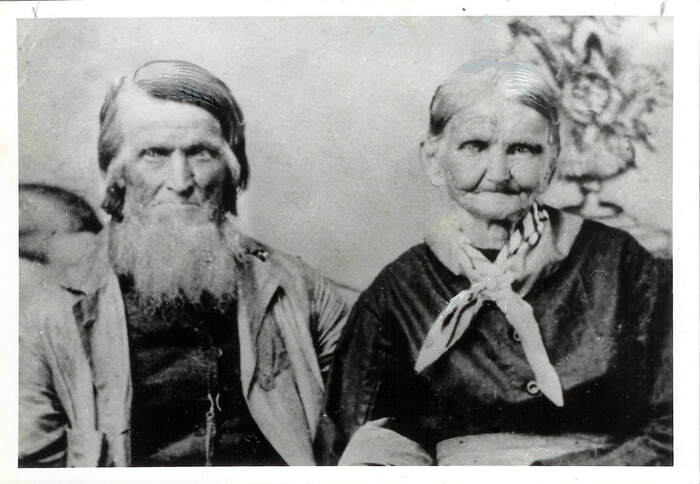 Phot of Sylvania and Catherine (Brewer) Blackburn the settlers of War Eagle
​​He then returned to Tennessee to bring his wife to their new home. He told of the wonders of the area, and much of the rest of the family relocated to the area also. Upon his return, he built a two story house which he completed in 1833. Part of this house still exists in the house that sits by the bridge. The Blackburns raised their own eight children, but later took in and raised six more orphans after the civil war. The Backburns became very influential in the area, acquiring many slaves. Sylvanus became a leader in the church, holding services in his home. He also started the first school in the county. The first grist mill was built about 1835 and was a very small and crude mill. By 1838 War Eagle had become quite a thriving little community after adding a blacksmith shop and a carpentry shop. A flood in 1848 pushed the mill into the river, completely destroying it.

After the the flood they rebuilt and expanded the mill to include a sawmill. New mill equipment was ordered from St. Louis, and was shipped by boat to Fort Smith, then brought over the Boston Mountains by wagon. At that time it was known as one of the best mills in the state. Then the Civil War came and all five of the Blackburn boys joined the Confederate army. Sylvanus took his wife and older members of his family to Texas until the war was over. The Blackburn home was used by the Confederates as a general's headquarters during part of the war. The mill was used by the Confederates until the forces had to withdraw in 1862 at which time they burned the mill to prevent Union forces from using it. After the war his slaves were freed, and he was pleased to find his home still intact upon his return. 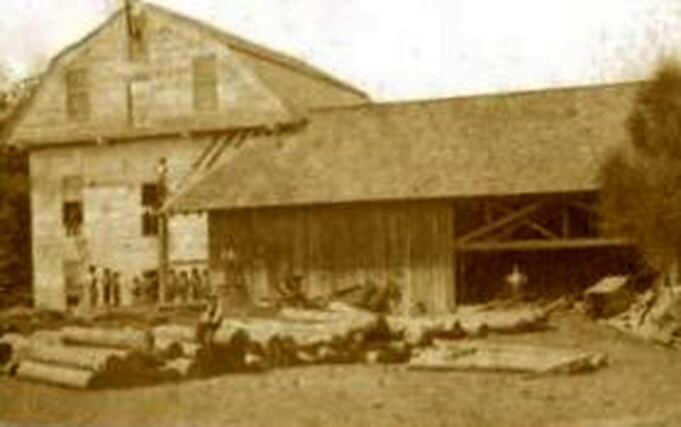 This is an image of the second grist mill and saw mill that sat at War Eagle from about 1860.
One son of Sylvanus and Catherine, James Blackburn, rebuilt the mill in 1873. He also built and ran a sucessful general merchandise store. The community got its first post office the same year. The name was listed several ways around this time, including War Eagle Mill, Wareagle, and finally War Eagle. The post offfice closed in 1967. He sold the mill in the late 1890s to James K. P. Stringfield. In the spring of 1903 it was purchased by J. E. Corssman. The mill was sold in 1912 to Dr. J. B. Kilgo. In 1914 he then sold it to his son B. B. Kilgo who operated it until it burned down in 1924. 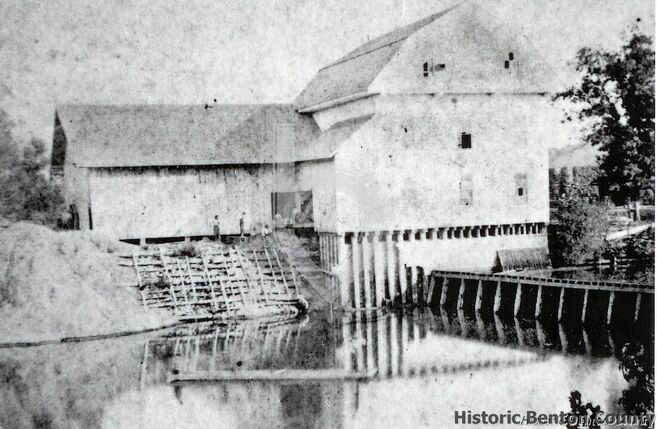 The above image is of the third mill that was located at War Eagle until 1924. 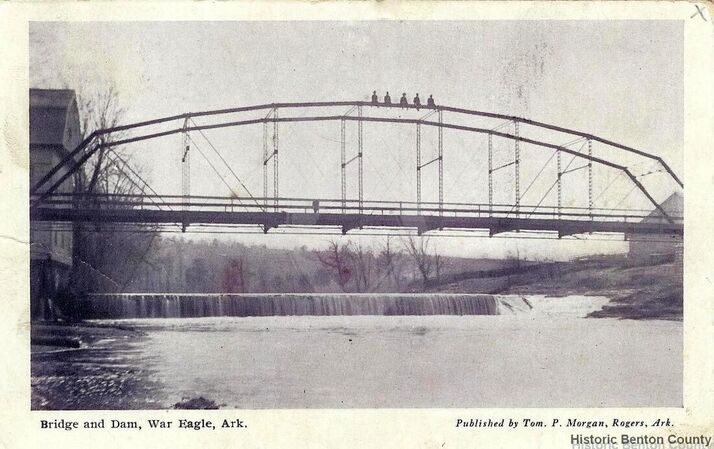 In 1907 a new bridge was added across the War Eagle River which is still used today.
. The War Eagle bridge is a 210-foot-long Phillips through-truss style bridge. It was constructed by the Illinois Steel Bridge company and was completed in 1907. The blueprints for the bridge are still in the possession of Benton County. 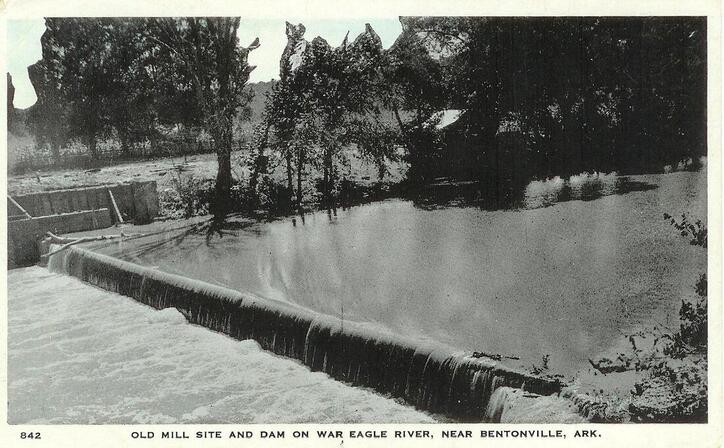 There was no mill at War Eagle for 49 years until its most reent rebuilding in 1973.
In 1973 the fourth mill was built on top of the old mill structure with only slight changes from the 1873 structure. With this latest rendition of the mill, it was a priority to stay as true to the original design as they could. Today you can find a store inside which sells products ground by the mill and other souvenirs. The current mill is powered by a 18 foot shot wheel. 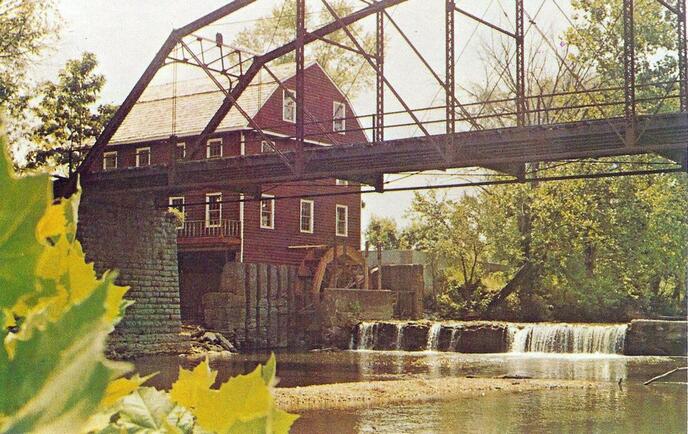 The fourth mill as seem today
One other feature to be noted on the War Eagle property is the family cemetery which holds over 100 grave markers.  Sylvanus and Catherine Blackburn, the original homesteaders of the property, had been childhood friends and married at the age of 16. When Catherine passed away in 1890, Sylvanus said his life ended with hers. He gave instructions to dig an extra large grave and leave it open. He went to his prayer room in their house and meditated and prayed for five days, then died in his sleep. Sylvanus was buried with his beloved wife and childhood sweetheart.