​Hon. Edmond Penn Watson - Is a member of one of the first pioneer families of Arkansas, has been a representative of the Bentonville bar since 1872 and is the dean of the profession in this district. He has also figured prominently in connection with public affairs in Arkansas and his record is a credit and honor to the state which has honored him. He was born at Van Buren, Arkansas, August 31, 1848. His parents were William Albert and Christiana L. (Crews) Watson, were natives of Virginia, when they came to Arkansas in 1847, casting their lot with pioneer settlers of the state. They located in Van Buren, where for a number of years the father successfully engaged in merchandising. He was a democrat in his political views, and Mrs. Watson was a member of the Baptist Church. She died in Fayetteville, Arkansas, in January, 1872, having for twenty years survived her husband, whose demise occurred at Van Buren in 1852. They were widely known and highly respected residents of this section of the state. In their family were nine children
In the acquirement of an education Mr. Watson attended the school of Fayetteville, this state, and at the time of the outbreak of hostilities between the north and the south was a student at Arkansas College. During the Civil War he aided in supporting the family and after its close engaged in clerical work for two years. He then took up the study of law under the direction of Major W. D. Reagan, and in 1869 was admitted to the bar, entering upon the work of the profession in Boone County, Arkansas, where he remained for nearly years. In 1872 he came to Bentonville, where he has continued in practice. His ability has developed with the passing years, which have brought to him broad experience, and that he has won the confidence and support of the public is indicated by the large clientage accorded him. He had been admitted to practice in all courts and has ever held to high standards in professional service. He displays keen discrimination in the intricate problems of the law and is seldom at fault in the application of a legal principle. He prepared his cases his cases with great thoroughness and his arguments are forceful and convincing, while his deductions were at all times logical.
In December, 1873, Mr. Watson was united in marriage to Miss Grace Dinsmore, a native of Benton County and daughter of A. W. Dinsmore, who came to Arkansas about 1846 and for many years successfully followed merchandising at Bentonville. Mr. and Mrs. Watson had eight children.
Mrs. Watson was a member of the Presbyterian Church, while Mr. Watson was affiliated with the Episcopal denomination. He was a stanch democrat in his political views and his political views and had been called to public positions of importance and trust. In 1871 he was chosen to represent Boone County, Arkansas, in the state legislature, being the youngest member of the house, and in 1877 he was called upon to represent Benton County in that body, while in the following year he was elected state senator from the twenty-fourth district, comprising Benton County and Madison County. He has long been an active worker in the ranks of the party and was a member of the constitution convention of 1917-18. He has done much to shape public thought and opinion, leaving the impress of his individuality indelibly upon the history of the state, in his public service has ever looked beyond the exigencies of the moment to the opportunities and possibilities of the future. For almost a half century he was o member of the Benton County bar, and that his life had been an honorable and upright one is evidence in high regard entertained for his colleagues in the profession as well as the general public.
Mr. Watson passed away August 20, 1930 after a two month illness. He was buried in the Bentonville Cemetery. 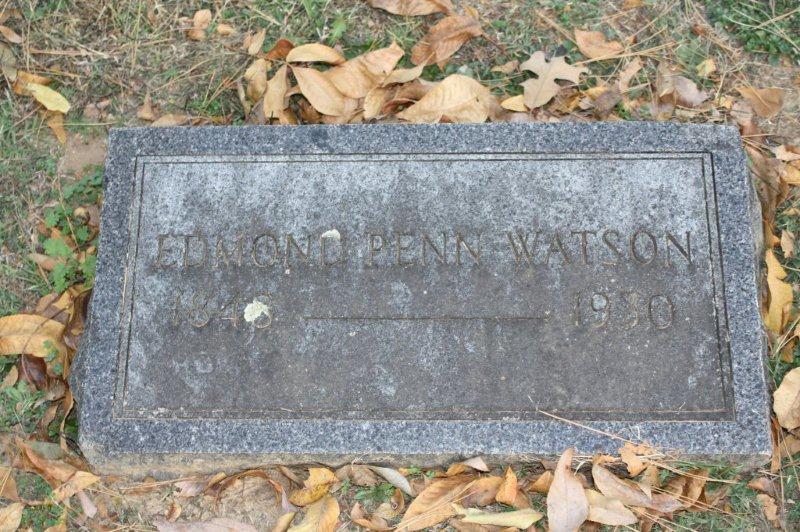 WATSON, Edmond Penn - Col. E.P. Watson,widely known Northwest Arkansas attorney, died at the family home on West Twelfth Street, Bentonville, at one o'clock Wednesday afternoon, August 20th, 1930. He had been critically ill for the past two months. Had he lived until the last day of the month he would have been 82 years of age. Funeral services will be held from the First Presbyterian Church Friday morning at ten o'clock, the pastor, the Rev. A.W. Henderson, conducting the services. Burial will be made in the City Cemetery. Edmund Penn Watson was born in Van Buren, Ark. and was the son of W.A. and Christian Crews Watson, who emigrated from Lynchburgh, Virginia to Van Buren in 1848. His mother grew to womanhood on the present site of Sweetbriar College, Sweetbriar, Virginia. The Watson family moved to Fayetteville in his boyhood days where Mr. Watson received his education and studied law. The family became prominent in Washington County affairs and his sister, Mrs. Clementine Boles was one of Washington County's best known women, a leader in church and civic work. Col. Watson first began the practice of law in Harrison but soon moved to Bentonville where he built up a large practice. He was a well-read man, a deep thinker and possessed a wonderful memory. He enjoyed the clientage of large corporations as well as of local people for 56 years. Col. Watson was married in Bentonville December 11, 1873 to Miss Grace Dinsmore, the Rev. D.C. Boggs performing the ceremony. Mrs. Watson was the sister of the late Congressman Huge Dinsmore, and daughter of A.W. Dinsmore, pioneer Benton County settler and Bentonville merchant. He moved to this county at an early date following a visit to Arkansas to act as best man at the wedding of a friend. Mrs. Watson died a few years ago. His death occurred at the home on 12th street which he established fifty years ago. Having a keen interest in politics he was a member of the last Constitutional Convention. Mr. Watson also served as a representative from both Benton and Boone Counties, as well as a tern as state senator. He is survived by three sons, Penn of San Diego, Calif.; Chester of Wichita Falls, Texas; Clement of Tulsa; also by four daughters, Miss Katherine Watson, a member of the faculty of the Daniel Baker College, Brownwood, Texas; Mrs. E.H. Bull of Buffalo, N.Y.; Mrs. E.C. DeShong of Bentonville and Miss Polly Watson of the home. He also leaves a large number of relatives and hosts of friends to mourn his departure. Mr. Watson was a member of the Episcopal Church but attended the Presbyterian Church with his family. An event of great interest to Mr. Watson last year was the birth of a great granddaughter, born to Mr. and Mrs. Knowles of Syracuse, New York, on his 81 birthday. Mrs. Knowles is the daughter of Mrs. E.H. Bull. [Benton County Record & Democrat & Sun - Bentonville, Benton County, Arkansas - August 21, 1930][Rogers Democrat - Rogers, Benton County, Arkansas - August 28, 1930][Rogers Daily News - Rogers, Benton County, Arkansas - August 21, 1930]