Weather Bureau In Bentonville Recalled
By J. Dickson Black (1961)
Some time in the spring of 1906 Bentonville became the smallest town in the United States to have a First Order Weather Bureau.

The weather Bureau was obtained for Northwest Arkansas by the Horticultural Society and Sen. James Berry of Bentonville. It was badly needed here because of the apple and fruit industry. At the\at time Benton County was the leading apple growing county in the United States.

Little history of the bureau has been found. It was located in a two-story brick building with a full basement. 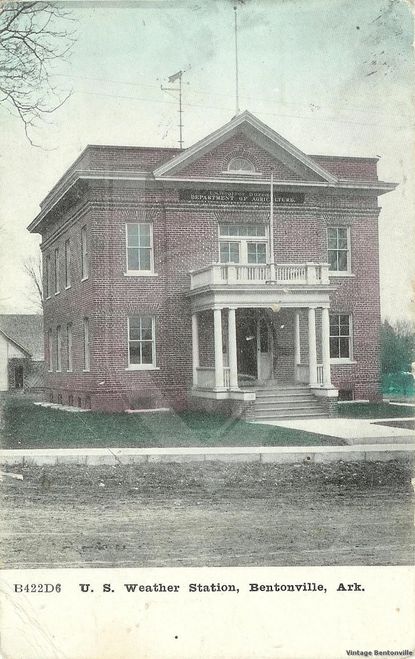 Capt. Orin Parker , a man with a sense of humor, was the first person in charge of the bureau. On May 10, 1906, he was introduced to the members of the society. The strawberry growers called for  better weather as it was nearing time for the berries to bloom.

"My plans are to use up all of the cold wet weather I have before the berries start to bloom." he answered. "Then I will give you the very best weather that I have in stock."

The report of the meeting went on to say that most of the members tried to tell Parker what kind of weather they wanted, leaving him very uncertain as to what weather the really needed even if he could supply it.

Captain Parked joined the Union Army as a boy in the last year of the Civil War. He served as a powder monkey. When the war ended he reenlisted and within a short time was transferred to the Army Weather Bureau and later went into the U. S. Weather Bureau Service.

He moved to Bentonville in 1906 from Dubuque, Iowa. On August 20, 1920, he retired as head of the bureau. Mrs. Parker was appointed to take his place and he served as her assistant until January 1928, at which time they both retired. 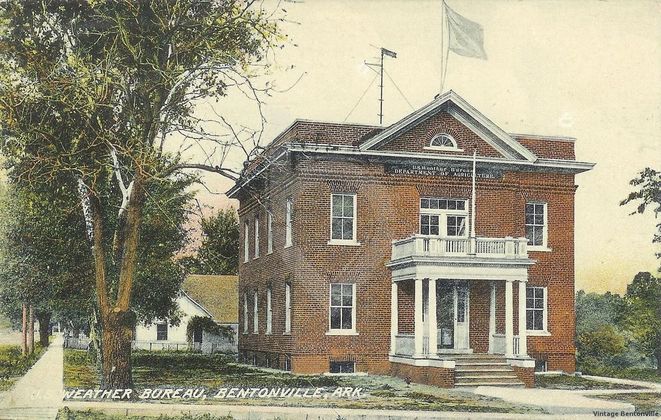 At the time of his death in 1929 Captain Parker held the record as having been in the Weather Bureau longer than any other man, and being the oldest man in the service. He was 84 years old and had served 63 years with the Weather Bureau. He never lost a day's work because of sickness in all that time.

When the Parkers retired Mrs. J. T. Gibson was appointed to their job. She had worked with them for many years. It is not known for sure when Mrs. Gibson left the Weather Bureau, but in 1942 when the office closed Verda Neely was running the bureau.

​It opened as a First Class Weather Bureau in a special building that stood where the post office does today [as of the writing of the article in 1961]. There were rooms for the weather equipment, offices and living quarters for the Parkers. There were also several rooms used by a fruit specialist who worked in the Department of Agriculture.

The office put out a weather report and forecast each morning, and reported any storms moving in later in the day. Anyone could telephone any time of the day to get the latest report. The weather report was also given out to the newspapers in the area.

The office sent cards to every mail box holder each day with the weather forecast, cards to the fruit farms telling them when to spray and what for. Cards were put in stores and other places around town with the forecast.
​
After Captain Parker and his wife retired, the officer was changed to a cooperative bureau. Under that setup readings were taken early in the morning from the instruments, and telegraphed to New Orleans. There the forecast was prepared and sent back in time for the office to help to print up the cards and mail them out.

The Weather Bureau in Little Rock has no records of the station here. But we do have a picture left of the building which bears a sign "Weather Bureau, Department of Agriculture."