What Author of Coin's Financial School Is Doing At Monte Ne
Arkansas Democrat - May 4, 1901
Last summer Mr. W. H. Harvey, the author of "Coin's Financial School," and other books, purchased the Silver Springs property, in Benton county, of this state, situated four miles from Rogers, on the Frisco railroad, organized a company for the development of the same, and in November last commenced improvements, making it a pleasure and health resort. The development of the property has proceeded rapidly, and on Saturday of this week it opens as a pleasure and health resort. Invitations are out for its grand opening ball at the Hotel Monte Ne. 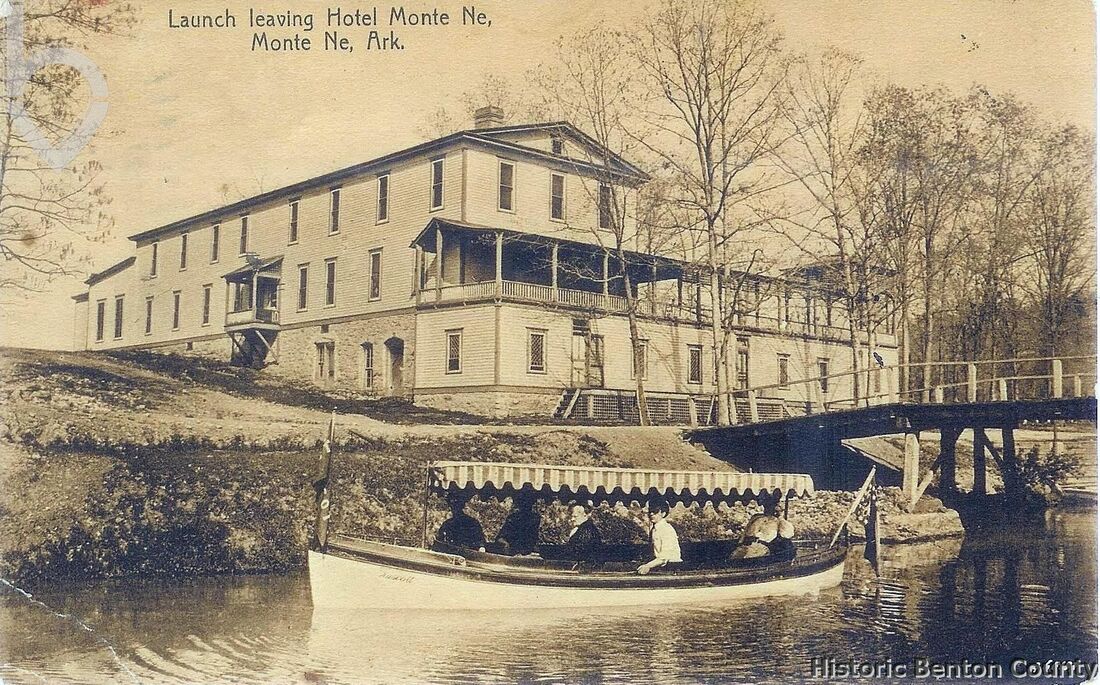 Hotel Monte Ne not long after its opening
A town site has been platted and the place has been named Monte Ne, the first word being French, meaning mountain, and the latter word, Ne , pronounced Nay, is from the Indian language, meaning water. There is no more beautiful spot, probably in all the world, than Monte Ne. Situated in a depression in the Ozark Mountains, with an altitude of 1,200 feet, surrounded by mountains that rise in a circle about it, with a lagoon over a half mile long, bordered with trees and shrubbery, flowers and beautiful scenery, and fed by springs flowing over 7,000 gallons of water per minute  - such is beautiful Monte Ne. The mountains surrounding it are covered with forest trees and a luxuriant growth of grape vines. Trails, grottoes and summer houses amidst the foliage are being made by the promoters of this new pleasure and health resort. Caves, cliffs, the latter resembling old ruined towers, are in the immediate vicinity.

The heath-giving properties of the water at Monte Ne are among the most remarkable in Arkansas. The property was first developed in 1857, and prior to that time the Indians used it, having their villages about the springs. Thousands of their arrow-heads are still to be found on the ground. During the war the northern and southern armies operating in this section of the state alternately made their winter headquarters here.

The Hotel Monte Ne, just completed, is the largest and finest building in Benton county, and an ideal hotel of its size. There is a flour and grist mill with a capacity of forty barrels of flour per day. About 100 lots have been sold and quite a number of buildings are in the process of erection. Mr. P. B. Hummel, of Carlisle, Ark., is among the new-comers, and is building a large livery stable, also a business block, and together with his sons will erect four residences. 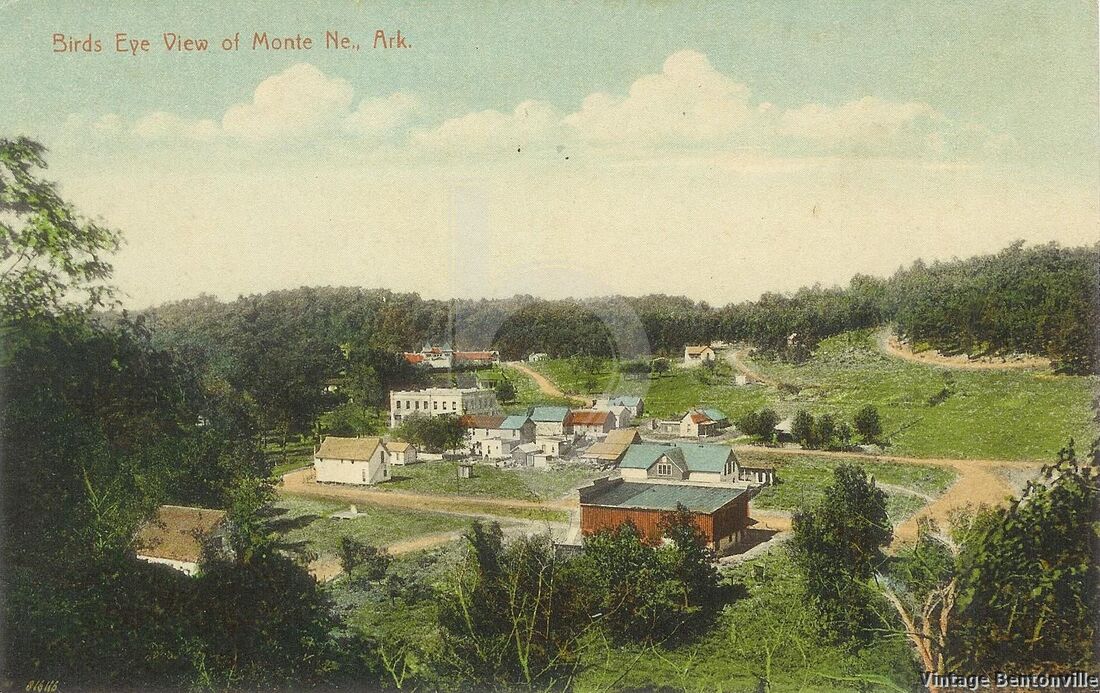 View of the downtown Monte Ne area in its heyday. At the lower left corner you can see the grist mill. The red structure in the photo is likely to be the livery stable.
​​The Frisco railroad and the Chicago & Alton railroad have gone into an arrangement for running excursions to Monte Ne, and thousands of people from other states are expected in here this spring and summer. The effect on Benton county of this new pleasure and health resort is electricial. Two turnpikes are building, financed by the citizens of the county, one from Lowell, Ark., on the Frisco road, to Monte Ne, and one from Rogers to Monte Ne. The first-named road is about three miles and a half long, and the second is about four miles long. Inside of a year an electric line is expected to be built to Monte Ne from one or the other of these two points on the railroad.

​Mr. Harvey has been received generously by the people of northwestern Arkansas, and the success of Monte Ne as a pleasure and health resort is assured. 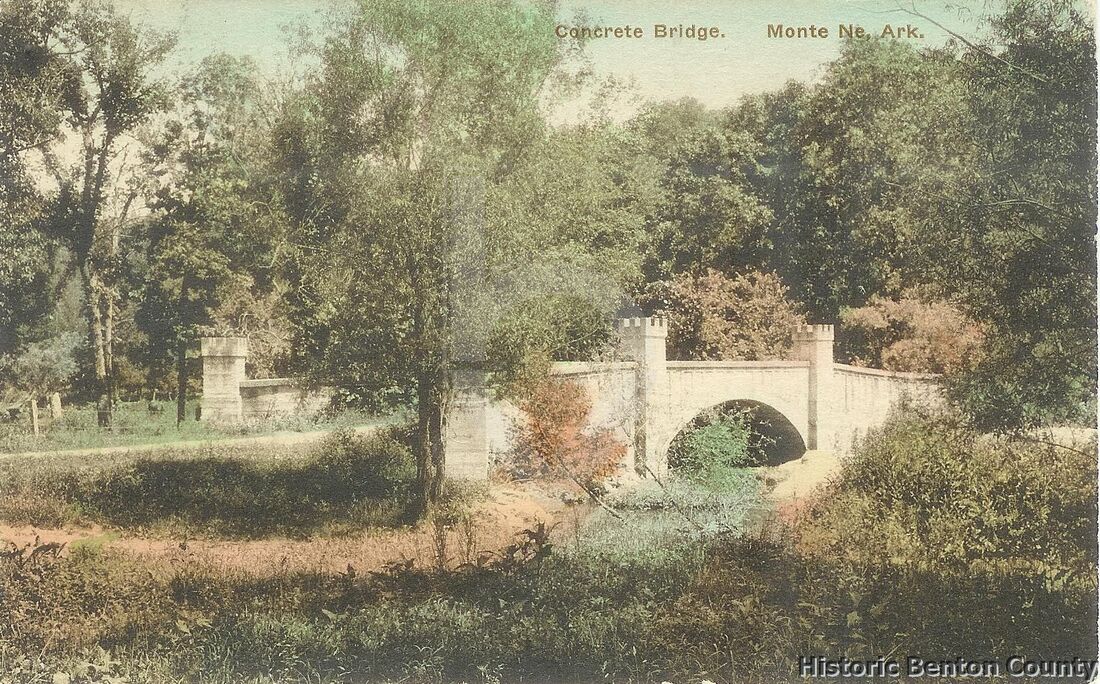