Where in the Heck is (or was)  Bloomfield?

Recently I was able to purchase through Ebay a couple of pieces from the post office at Bloomfield, Arkansas. I was excited to see these because never in my 20+ years of collecting had I seen anything from this community. Today there is nothing left of Bloomfield other than maybe a foundation or two.

The town was located three miles west of Gentry, and about six miles north of Siloam Springs. The first settler in that area was Mr. Abercrombie and his seven sons who settled the Round Prarie area. The town itself was originally platted in 1873 by David Chandler, with G. W. Mitchell as the original propietor. The community had a large public square surrounded by a business district and residential lots. The first house in the village was built by Dr. J. H. Neagle. The first store was owned by B. B. Mitchel. A post office was established in 1875 after the town had been laid out, with the first postmaster being R. B. Wilson. Later the postmaster was Frank Mitchell, the father of the founder of the town, The town also boasted the following businesses: a general store owned by R. B. Wilson and W. I. Richardson; drugs and groceries, Mitchell & Bro.: hotel, David Chandler; blacksmith, J. Johnson; woodworking, J. E. Stewart; and physician, J. R. Floyd. The town also had a tinshop, hardware store, saloon, and gambling house.

There was also a Bloomfield Academy that operated from 1882 to 1886. The Bloomfield Steam Roller Mill and saw mill was located three-fourths of a mile outside the village. With the town being near Indian Territory, it carried on a good trade with the indians. The town is believed to have as many as 250 inhabitants at one time. It was said to have been larger than Bentonville, Cherokee City and Maysville at one point. 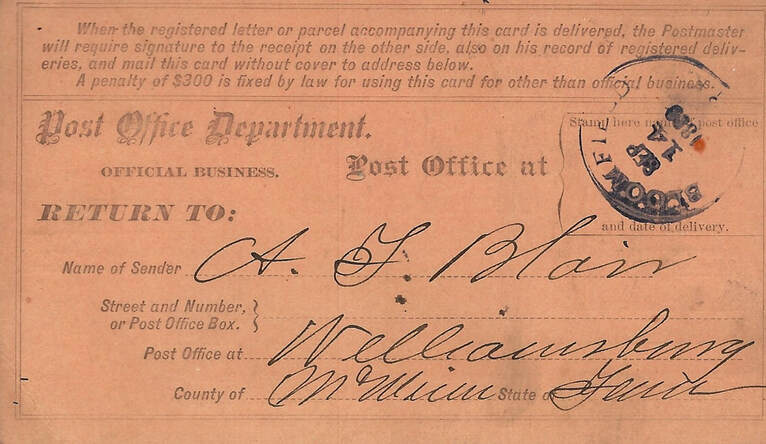 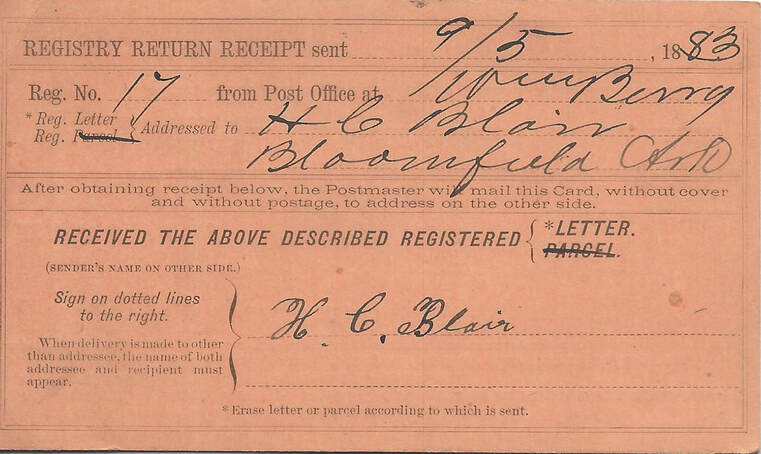 Registered letter card for Bloomfied from 1883.
A Masonic Lodge was built in the village in 1871. The second floor of the building was the lodge hall. The downstairs was used by local area churches.

When the Kansas City Southern Railway company decided to run a line through the area, the citizens of Bloomfield were certain it would pass through their town. They were disappointed when the line passed several miles to the east. When Gentry became a town in 1894, Bloomfiled began to dwindle. Many of the residents moved their families and businesses to towns like Gentry and Siloam Springs that were located along the new railway. The Bloomfield post office continued operation until 1904. In 1905, the mill was moved from Bloomfield to Gentry. A Bloomfield Public School operated until it was consoliated in 1931 with the Gentry School District. Time took its toll the business houses and most of the residential dwellings, until there is nothing left of the town today.