White River will Cover Tomb of 'Builder of Ozarks'
Writen by Clovis Copeland - December 1960
When the waters of White River, impounded by Beave Dam, back over the sleepy little village of Monte Ne, it probably will cover the remains of  William E. [sic] "Coin" Harvey, the colorful, eccentric genius and premier builder of the Ozarks.

An above-the-ground concrete tomb which holds the bodies of Harvey and his son, Richard Haliday Harvey, is located on a quiet hillside by a shady lagoon, an impressive reminder of the fantastic and sometimes turbulent history of the beautiful valley in the eastern portion of Benton County in northwest Arkansas. 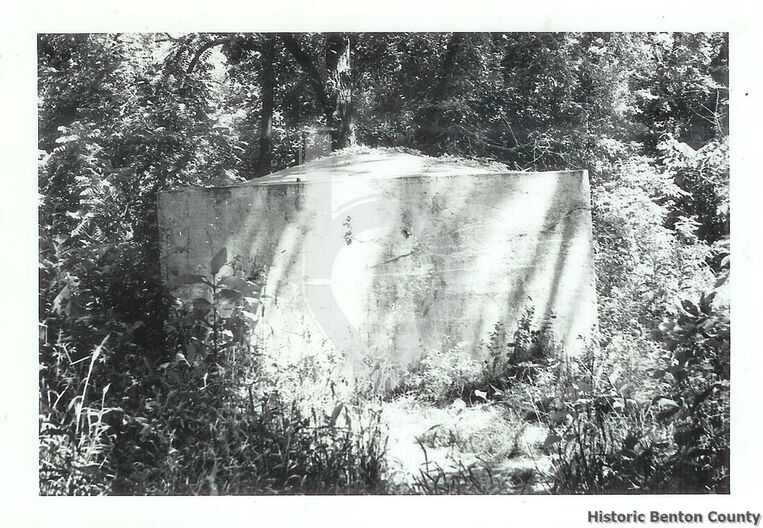 The tomb of Coin Harvey and his son as it sat down in the Monte Ne valley before the lake
Monte Ne will be under the western reaches of the lake to be impounded by Beaver Dam. Contracts have been awarded for construction of the dam and for turbines and electrical equipment for the dam. The U. S. Army Engineers plan to award a contract for construction of the powerhouse about June, 1963. Filling of the lake is expected to start in January, 1964 with power production to begin in April, 1965,

​Agents of the engineers are expected to begin purchasing the land in the upper reaches of the lake late next year [1961]. By then, heirs of the late Mr. Harvey must decide whether his tomb will remain at the site selected for his burial, or be moved to another place.

The tomb is a huge structure, weighing many tons, but to move it a reasonable distance will not present any great problem, Engineers explain. It is about eight feet wide and 12 feet long and eight feet high at its peak.

Berry D. Graham, who moved to Monte Ne with his parents 52 years ago [as of the writing of the article] from nearby Lowell, was a close friend of Mr. Harvey. Graham owns the store at Monte Ne. He is also the postmaster. For years, he was the justice of peace for the township and a deacon in the church.

Relatives Include a daughter, Miss Annette Harvey, nearing 80, who lives near the old Harvey family home near Huntington, W. Va., and probably another daughter, who was known to Graham as Mrs. Marie Howard, and a grandson, Richard Haliday, husband of famous singer, Mary Martin and a writer of some note. He is Mrs. Howard's son.

Harvey was born in Virginia in 1851. His family made money in the coal fields of Virginia and West Virginia, but he started out on his own. He was a railroad engineer for the Union Pacific for a time and later, was highly successful as a business man. He is said to have made and spent several fortunes.

The late John Gould Fletcher, prize-winning Arkansas writer and poet, described him as a perpetual theorist concerning money. He described him as a rare type which combined "both shrewedness and naivete in real extraordinary proportions; men of this sort have not only to possess complete confidence in the most harebrained ideas but be able to inspire others with the same confidence; and this Harvey was remarkably able to do, as his later career shows."

He was a close friend and admirer of William Jennings Bryan and Harvey's famous book "Coin's Financial School", was distributed far and wide in the South and the West and helped get for Bryan the nomination for president of the United States. 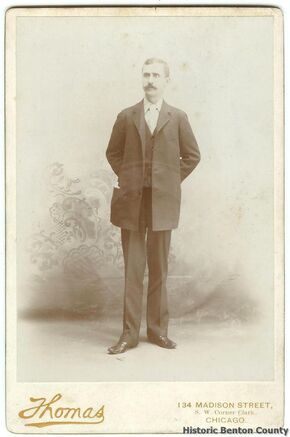 A cabinet photo of a young William Hope "Coin" Harvey
About the turn of the century he came to Arkansas and on June 1900, he spoke to a large crowd at Eureka Springs on "Free Silver", a burning topic of the day. He had the appearance of a college professor - lean, distinguished-looking and wore a pince-nex [sic] [A pince-nez is a pair of eyeglasses with a nose clip instead of earpieces.]

He purchased nearly 400 acres, platted a town and called it Monte Ne. When he came to Arkansas he left his wife behind in Virginia, but brought along his son, William Haliday Harvey, who was just reaching maturity when they settled in Arkansas.

A few years later, the son was killed in a train accident in nearby Oklahoma and the father selected the site for a tomb. He constructed it of stone, steel and concrete and made it large enough for two and made it clear that he was to be buried next to the son.

The tomb is between the lagoon and the three-story Harvey office building on the hill above.

The flat-bottomed hollow is dense wooded ridges. There were several springs and a small creek which Harvey made into a lagoon and showplace. He made a tourist resort of the place, built hotels and a railroad spur to the Frisco line four or five miles away. 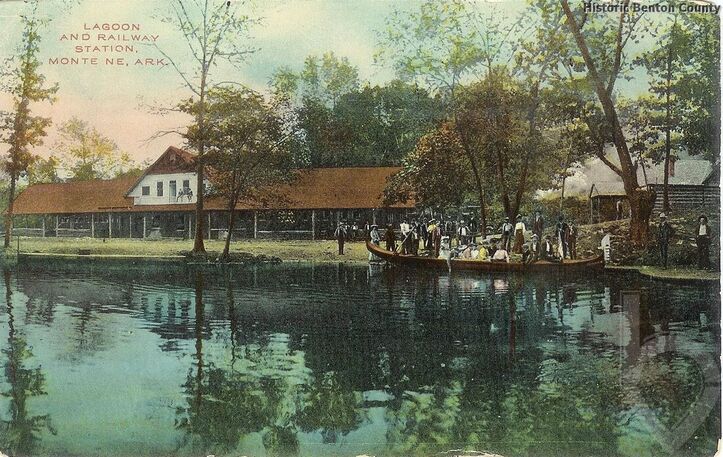 A postcard of the Monte Ne train depot and the gondolas which would take vacationers to the hotels
The club houses were enormous log structures facing each other. One burned several years ago, but the other remains.

Harvey felt that the present civilization would perish by its own hand. He decided that the records of ancient civilizations which have been unearthed did not tell the merits and demerits of the people, their struggles and why they declined and fell.

Around 1920, he undertook the construction of a concrete pyramid in a cove at the end of his canal and lagoon. It was to be 130 feet high and 60 feet square at its base and estimated that the cost would be around $75,000. Within its vaults, he planned to place in three rooms in the base, items of this age including safety pins, needles, a victrola and a specially prepared book which would give the history of the rise and fall of this civilization and a symposium of opinions on the cause of its threatened impending death. 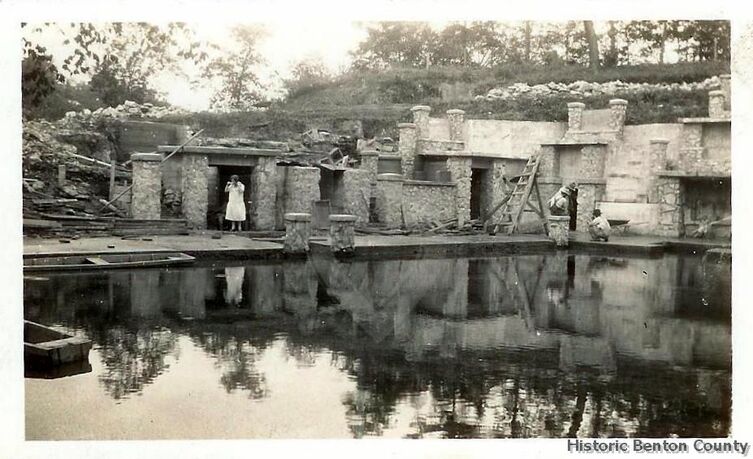 This is a photo of what would be the base of the pyramid (​amphitheater) under construction
These books were to be placed in heavy glass containers, sealed up hermetically. Then he planned that after the entire structure had been allowed to dry for a year, the three entrances would be closed with reinforced concrete, with the air being removed from the vaults in the process.

He figures that after this civilization had perished because of its own greed, another would rise slowly as this one had. When they reached the point where they had fathomed the secrets of steel and concrete, they would break open the vaults, and would find a key to the english language which would enable them to translate and understand what they had found.

This is what the pyramid was supposed to look like when completed. It really would have looked more like a obelisk than a pyrimid.
As late as 1933, Harvey had hopes of completing his project. The impressive foyer and amphitheater were completed with impressive seats, a stage and elaborate chairs and benches of concrete. But he never got around to building the main tower part of the pyramid.

There have been many rumors that Harvey had sealed the records of this civililzation in some of the sealed compartments of the amphitheater, but Graham said this had not been done.

He said that when Harvey died Feb. 11, 1936, a large casket was obtained from Fort Smith and two copies of his books and some other papers were sealed in it. After an opening was blasted in the tomb, the glass casket was placed between the caskets of Mr. Harvey and his son and the tomb revealed.

Graham recalls that he went with Mr. Harvey to Bentonville in 1927 while Mr. Harvey made arrangements to divorce his wife. A few weeks after the decree was issued, he called Graham to his home in the garden and had him perform the marriage ceremony which united Harvey and his secretary, a southern Missouri lady who had worked for him several years.

The second Mrs. Harvey returned to her folks in Missouri following his death, and died within a few years, as Graham recalls. She had sold the estate before she died.

Water of the new lake will cover the valley from 30 to 40 feet.

Now for the rest of the story. Mr. Harvey's tomb was moved to higher ground. They first tried to load it onto a truck and move it that way, but the weight broke the axle of the trailer. They then just took a bulldozer and carefully pushed it up the hill to its new resting place.