Who Was Driving ?
By J. Dickson Black (1959)
"Where is the wreck?" someone called out as two ambulances sped through the little town late Saturday night. "Five miles west" was the answer [toward Centerton.]

Most of the people, having nothing better to do, got in their cars and drove to the scene, hoping to see some blood, and have something to talk about at church Sunday.

When the ambulance and the sheriff's car got there, they found several people ahead of them. There was only on car in the wreck and it was upside down in the ditch, its lights still on.

"Where are the people from the car, and are they hurt?" asked the sheriff as he got out of his car.  "They're still in there," a man said. "As drunk as they are I thought that was a good place to leave them until you got here."

The sheriff stepped over to the car and shined his light in, and there they were, three men, all drunk, and all wanting out. He kicked out the back window and out they all came. Were they hurt? No. All they wanted was a ride into town.

The sheriff held them until the State Highway Patrol arrived. When the trooper saw the three men he knew them all. In the past month he had picked up each of them for drunken driving and had seen the judge take their driver licenses away.

"Who owns the car?" asked the trooper. One man stepped forward and said he did. Then he asked the trooper to send the people all home as he didn't like them standing around. By that time there were 50 to 60 bystanders, two ambulances with their red lights still turning around, two cars from the sheriff's office and the state patrol car, all out on this lonely county road.

The trooper took the man aside, where most of the people could hear them, and asked who was driving. "I didn't know" was the answer. "I was setting in the back seat at the time" said the owner of the car. "You know I lost my license last week so I can't drive anymore."

Then the trooper asked number two who was driving. "I don't know, sir," was the answer. "I was riding in the back seat." "Where were the others at that time?" he was asked.  he replied, "I don't know. I didn't see them until after we hit the ditch. It was a ditch and not a hole in the road, wasn't it?"

As all this was going on, the third man had stepped over by the car and asked someone to light a match so he could see if the car was on fire. Then as he tried to walk over to the trooper, he damned the road for moving out from under his feet. Asked if he was the driver, he said, "No sir," adding how could he drive without a licence? Anyhow, he was in the back seat. When asked,where the others were, he said, "how should I know? I'm not living their lives." He also added when asked if he was he drunk, "No more than I was yesterday and will be tomorrow." 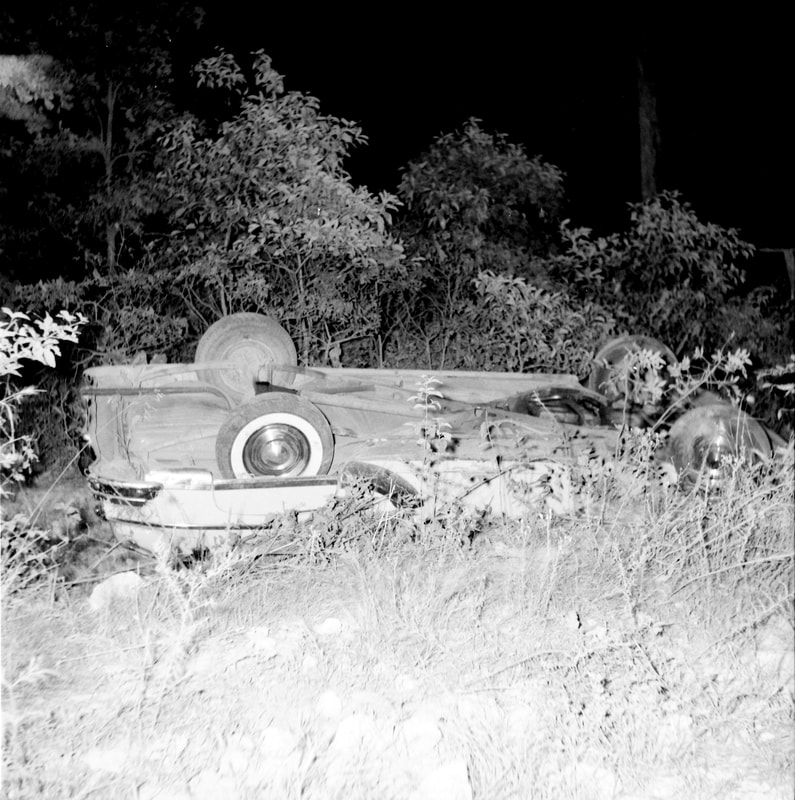 This was the car in the wreck five miles west of Bentonville
After an hour of asking questions and a lot of fun-making by the crowd, the trooper loaded up his three men and listed the car as not having a driver at the time of the wreck.

On Monday when they came up before the judge, somehow number three remembered that he had been driving at the time of the wreck, so that ended the case of the car with three driver and no driver.