The building is the Terry Block, which stands on the south-west corner of the square. Col. Terry Had it built in 1888.

William Terry was born in Glasgow, Ky., in January of 1844. He lived on a farm until he was 14 years old. By then he had received a good practical education in the common schools, and left home to take a job in a dry goods firm in Horsewell, Ky.

When the Civil War started, he enlisted in Company F, Sixth Regiment, Kentucky Infantry. He was in the Confederate service until May 20, 1865, when he surrendered at Glasgow, Ky. He was in the battle of Shiloh, the first fight at Vicksburg, Baton Rouge, Murfreesboro, and all the engagements from Dalton to Jonesboro.

He was held prisoner by Union soldiers for 20 days. After his return to the Confederacy, he was sent to Kentucky as a recruiting officer and held the rank of first lieutenant while only 18 years old.

After the war he attended school for five months. Then he went to Red Sulphur Springs, Tn., where he was manager of a dry goods store for a year.

He then moved to Milligan, Tx, and clerked in a hotel for a short time, then moved on to a store on Brazos River. In 1868 he went to Dallas, Tx., and clerked for three years. He then bought a stock of goods and opened a store in Breckenridge, Tx. A year later he sold this store and moved back to Dallas.

​He first opened a drygoods store in a small wooden building that stood where he would one day build his big store building,, the Terry Block. 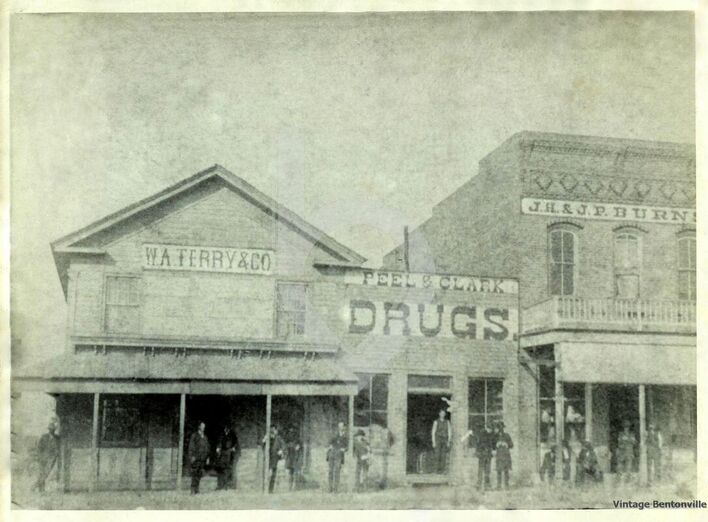 The wooden frame building at the left in this photo was Col. Terry's first dry goods store in Bentonville, opened in 1874. He later constructed the Terry Block building in this same location. The Terry Block was the first three story commercial building in Bentonville. Today, 87 years later [at the time of this article], it remains an imposing structure on the Bentonville square.
​
He later married a second daughter of Dr. Smartt, Miss Susan Smartt; they had three children. He also had one child by his first wife.

From the day that Col. Terry opened his first store, his business grew. He worked on "strictly business" principle, and he would never stop to any gimmicks or petty tricks to catch business. He claimed that a reputation for honesty and square dealing was the best advertising a firm could have, and to this thinking he owed his success.

Three or four times a year one would read in the newspaper that Col. Terry had gone to market, or he had gone to buy out some dry goods store that was closing. As soon as he was back there would be large ads to tell all the wonders and new low prices he had on this new merchandise.

By the time Col. Terry had the Terry Block built, he was an officer in the Benton County Bank. As soon as the building was opened, the bank moved into the corner room, where John Wright's insurance office is now. At that time it was the largest bank in the county. 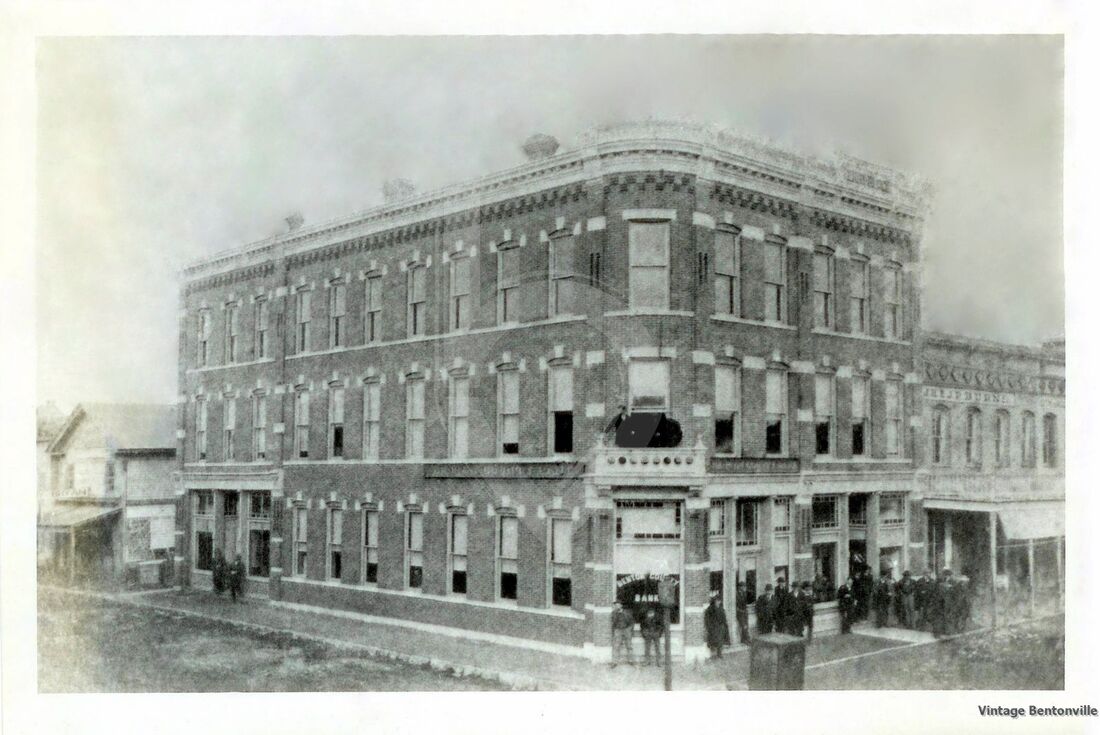 The Terry Block building, located on the northwest corner of the intersection of Main and Central, was Bentonville's first three story commercial building. It was built in 1888 by Col. William A. Terry, who founded his fortune on "honest dealings" in the dry goods business here. The front corner of the building was first occupied by the Benton County Bank. 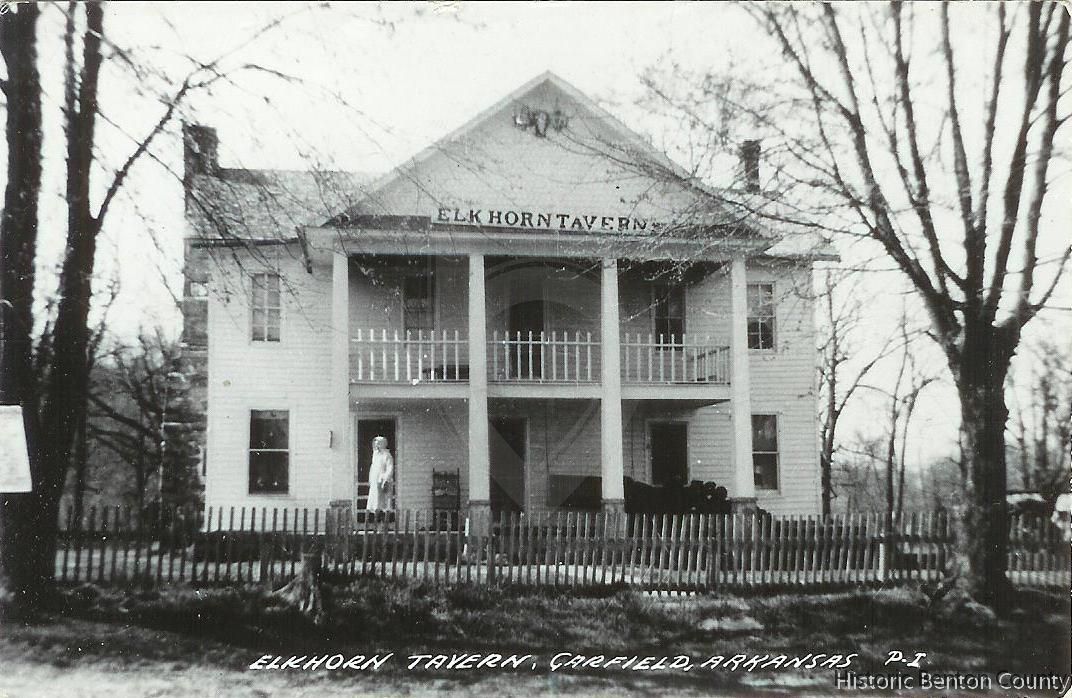 Col. William A. Terry, seated, is shown in this old photo with clerks inside his well-known dry goods store that for many years occupied most of the Terry Block building in downtown Bentonville.
​
​Col. Terry didn't own just a dry goods store, he was a partner in several other businesses in Bentonville, as well as owning stock in firms that didn't carry his name. Any time stock was sold for some new venture be bought some. In 1887 he had a 12 room hotel built.

​He also owned several farms in the county. At one time he had what was listed as the largest Jack farm the world. It may not have been that big, but it was the biggest in the state. In November 1897 when he sold the farm, the sale bill listed 40 head of Jacks and 60 Jennetts, plus many colts. One Jack he sold had cost him $1,500 when it was three years old.

Terry's dry goods store was said to be one of the most outstanding stores in the state. He had many items that could otherwise be found only in the big stores at Little Rock. For the people who wanted only the very best, he had it. For those looking for a bargain, he had that too. His ad in a Benton County Democrat in 1899 stated, "We have suits beginning at $2 and going to $7, and they are about the finest made."

Col. Terry died Feb. 25, 1901. One newspaper writing of him said, "When there was as enterprise of any kind for the bettering and building up of Bentonville the promoters always sought out Col. Terry, assured, if there was merit in the proposal, of a generous subscription to their enterprise. When there was a mass meeting called for any purpose, it was not considered complete without his presence and counsel. His name was always one of the first to be put down upon the subscription paper for any worthy charity. He helped all churches alike, never refusing any. In business he was prompt and thorough going, believing that 'what was worth doing at all, was worth doing well'."