Thomas Meredith Wyatt D.D.S. – Since moving to Bentonville, Dr. Wyatt has gained distinctive precedence as a loyal and public-spirited citizen and one who has contributed in generous measure to every worthy project advanced for the general welfare of the community. He [was at the time this was written in 1911] the oldest dentist in the state of Arkansas who held membership in the state association of dentists, and could safely be declared to be the last of his era to give way to the pressure of years to leave the field to the next generation.

Dr. Wyatt was born in Stuart County, Tennessee, on the 9th of January, 1839, and he was reared to the sturdy discipline of the home farm and early familiarized himself with the log-cabin school and other primitive conditions of the country youth of ante-bellum days. His father, John C. Wyatt, was born in North Carolina and his parents were from Spartansburg district, South Carolina. They were planters and some of the name owned slaves and were numbered among the aristocracy of the South. William Wyatt was the grandfather of Dr, Thomas M. and he was a soldier of the Revolution. His remote American ancestor was an Englishman who came to Spartansburg district, South Carolina, and reared a family of seven sons, whose representatives have scattered across the continent  and constitute the forefathers of the [later] generation of the Wyatts in the United States. John C. Wyatt married, in Tennessee, Miss Frances Yarbrough, who died in July, 1839, with Dr. Wyatt as her only child. For his second wife Mr. Wyatt wedded Delia Stagner, and they reared a family in Stuart county.

Dr. Wyatt had scarcely more than begun the serious affairs of life when the war between the states broke out. He immediately enlisted at Camp Quarles, near Clarksville, Tennessee, in 1861, joining Company F, Fourteenth Infantry, under Colonel Forbes, General Anderson’s brigade. The regiment was ordered to Virginia, where it became a part of General Jackson’s command, and its first battle was fought in the Shenandoah Valley. In December, 1862, he was paroled on account of illness and was confined in a hospital for a time. Thereafter he was placed on detached duty as a wardmaster in hospitals at different points for a time. When able he re-entered the army,  joining the Second Tennessee Calvary, and he saw much varied and exciting service from then until the close of the war. His regiment was at Knoxville during the siege, and subsequently at that place he was captured by the enemy and after being held in duress for three weeks he was taken  aboard a train for Chattanooga, bound for Camp Chase, Ohio. En route he planned to escape from the heavily guarded stock car, in which thirty-nine soldiers were confined, a single comrade, Me. Fambough, being in the secret of his intent. In the darkness of a black night both leaped from the moving train and landed upon a fill, scarcely scratched but followed by oath and bullets from the guards on duty. They crossed Sand Mountain and reported at Gadsden, Alabama, procured transportation to Rome, Georgia, and then joined their command in Virginia. At Bristol, Tennessee, Dr. Wyatt was again taken prisoner, and he made his escape near Barboursville, Kentucky, and three days later he was retaken by the Federal Home Guard and taken to Williamsburg, Whitley county, Tennessee. There he actually “lied out” of their clutches, a practice regarded as a long suit for captured soldiers. He again crossed Sand Mountain to Gadsden and was sent to Blue Mountain, Selma, Montgomery, and then on to Virginia to his command. When the war ended Dr. Wyatt was with the army at Wytheville, Virginia, where his company disbanded and he was mustered out at Charleston, West Virginia.

The Doctor's first employment after the war was as a farm hand to earn money with which to pay his transportation home from the field. Later he chopped wood as a means to securing funds to prepare the way for his entry into the dental profession. He studied in the offices of Dr. R. H. Wilson and Dr. Canine at Louisville, Kentucky, and so rapid was his progress under their able preceptorship that he was able to enter upon practice of his profession at Waverly, Tennessee, in 1866. He remained there until November, 1869, when he came to Arkansas and located in Russellville. There he practiced for a period of fifteen years, at the expiration of which he removed to Dardanelle, remaining there five years, and then came to Bentonville, Benton County. He was therefore a pioneer in the dental profession in the state of Arkansas and he gained wide renown for his dexterity in his chosen field of endeavor. In connection with his profession he held membership in the National Dentist’s Association and in the Southern branch of the National Association. He was instrumental in the organization of the Arkansas Dental Association and was a member of ​a committee chosen by that association to appear before the legislature of the state to secure legislation in the interest and for the protection of the dental profession.

In politics Dr. Wyatt was aligned as a stalwart supporter of the principles and policies for which the Democratic party stood sponsor, and though he eschewed politics as a practice he responded to calls from his townsmen to serve them in capacity of member of the Bentonville Board of Aldermen. In a business way he contributed to the institution of a canning factory in Bentonville, and in this concern he gave most efficient service as secretary. In the time-honored Mason fraternity Dr. Wyatt was affiliated with Bethany Commandery, No. 16, Knights Templars, and with the Blue Lodge, Chapter and Council, in the latter two of which he wa incumbent of the position of treasurer. Both he and Mrs. Wyatt were devout members of the Methodist Episcopal Church, South.

At Dardanelle, Arkansas, on the 5th of April, 1872, was solemnized the marriage of Dr. Wyatt to Miss Elizabeth Parker, who was born in Yell County, Arkansas, in 1849. She was the daughter of John C. Parker, who was born and reared in middle Tennessee. John C. Parker was a minister and presiding elder of the western district of Arkansas in the Methodist Episcopal Church, South, in the ante-bellum days. Rev. Parker subsequently removed to Texas and he was summoned to the life eternal at Waxahachie, that state. He was united in marriage to a Miss Simpson and they became the parents of five children. Dr. and Mrs. Wyatt had no children.

Dr. Thomas Wyatt passed away on August 17, 1923. He is buried in the Bentonville Cemetery.
​

Adapted from the Historical Review of Arkansas  by Fay Hempstead  1911 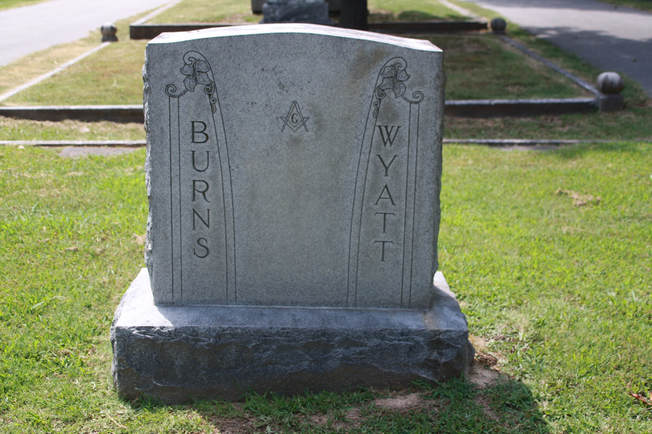 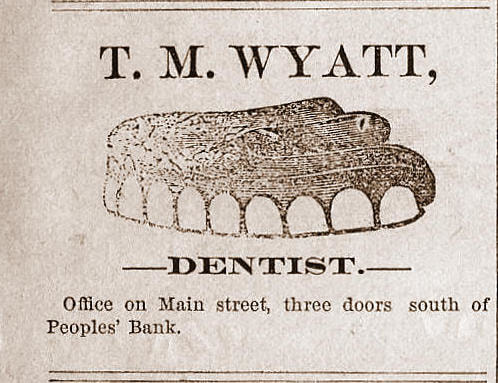