Bentonville's Confederate Statue
Benton County residents have so long seen the county courthouse on the east side of the square that it's hard to realize that before the Civil War the courthouse sat in the middle of the Bentonville square. During the course of the conflict, this building was burned to the ground. After the war, many people wanted to place the courthouse back in the same location, but there were a lot of people who wanted to keep the middle of the square as a public park. A petition by then County Judge W.S. Floyd, deeded the property to the "Daughters of the Confederacy" to be preserved and to be known as Public Square Park. The new courthouse was then built on the northwest corner of the square.

Funds were raised through donations, entertainment events, and benefits to maintain the park and to build a statue to honor Confederate soldiers who paid the supreme sacrifice and in memory of those who fought and survived the war. For years, the women of "The James H. Berry Chapter, Daughters of the Confederacy" worked to raise funds for the purchase of the monument. A generous gift of $1000 by A. J. Bates covered a large amount of the $2500 cost of the statue while the rest of the money was raised and the statue paid off about a week before its dedication.

The statue was designed by Barney Cott, and the entire monument stands 25 ft. tall. It was assembled by the Charles Scott Company of Barry, Vermont. The statue was to be a life-size composite of a Confederate soldier, holding his rifle at the top. The figure stands about 7 feet tall. The statue is not of James H. Berry but is a generic statue representing all the Confederate soldiers who fought in the war. At the base of the statue sit four cannonballs. Inscribed on the base of the statue on all four side it reads "Confederate.  Separate carvings on each side add the following inscriptions. On the front (west) side it reads "To the Southern Soldiers, Erected by A. J. Bates and James H. Berry Chapter, United Daughters of the Confederacy, Aug 8, 1908. On the south side: "1861 - 1865." On the north side: "Their Names are Borne on Honor's Shield". On the east side: "Their Record is With God," and "They Fought For Home and Fatherland." 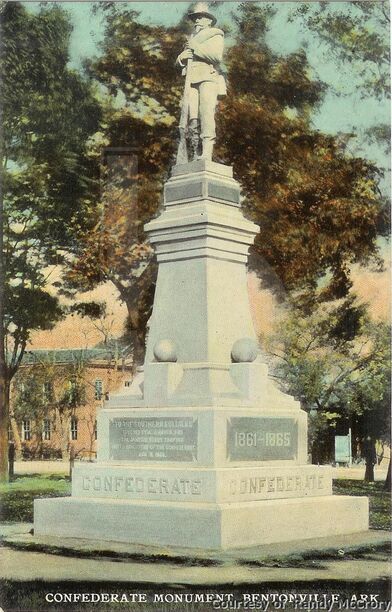 This is a postcard of the Confederate Statue from about the time it was dedicated.
Invitations were sent out for the unveiling of the statue. One of the invitations read: "We invite everyone without any exception. Let us give one day to honor the dead - one day to peace and unveiling good will." People flocked to Bentonville from the surrounding states to be a part of the festivities. There were so many people who came on the railroad between Rogers and Bentonville they had to add additional coaches to accommodate all the guests. Local people flocked in by buggies, wagons, and on horseback to view the events of the day. It was estimated that the crowd might have been as large as 10,000 people and considered to be one of the largest gatherings ever in Benton County history.

The week leading up to the event had been very hot, dry and dusty. But the day before the event they had a rain shower which settled the dust. It allowed people to come to town who might not otherwise have braved the dusty roads.

The morning of August 8, 1908, the day of the unveiling of the statue, the events started early at Park Spring with the band playing "America". There was then an invocation given by Rev. P. Carnahan, followed by a welcoming address by the mayor of Bentonville, A. W. Morris, who greeted guests to the city. There was then a beautiful vocal solo by Miss Emma McAndrews, which was followed by Hon. Hugh A. Dinsmore, distinguished ex-congressman, who delivered a most appropriate half hour long address. People from town had been asked to bring large basket lunches to be shared with guests.

​About 2 o'clock, the parade started at Park Springs and ame down what was them known as North Park Street (today it would be N.W. B St.) and proceeded to the City Park (Bentonville Square). The parade was led by the Bentonville Band. The floats were decorated in Confederate colors of red and white, and the horses were draped in white blankets trimmed in red and white  roses. A. J. Bates rode on an early float in the parade. Senator Berry, who was a Major General in Command of the United Confederate Veterans of Arkansas, was also near the beginning of the parde. Captain Cyrus Pickens of was marshal of the day and in charge of the parade.  ​A float carrying 13 beautiful young ladies bearing signs of the 13 Southern States that seceded can be seen on a float in the photo below. In the center of that float and elevated above everyone sat Miss Berry Hyatt (granddaughter of James H. Berry), representing Grand Old Arkansas. This was followed by a float from the Southern Memorial Association of Fayetteville. Then a float of the Sterling Price chapter oh the U.D.C. of Rogers., then a rose-covered float with the members of the U.D.C. of Bentonville. About two dozen old veterans,  those who could walk the mile distance, marched the route on foot, . The rest came in buggies and wagons with the total estimated to be about 200.

These are panoramic postcards taken of the parade on the day of the dedication.
When arriving on the square you could look and see that the monument was draped in Confederate flags with cords attached for the unveiling. By this time it was about 2:30 in the afternoon and the Bentonville square was packed with people. Mr. G.F. Lindsey was the master of ceremonies and introduced Rev. Bearden who opened the unveiling exercises in prayer. After that the Bentonville band played with a chorus of young ladies singing "The Bonnie Blue Flag." Then Mrs. W. F. Patton, President of the U.C.D,. delivered a short address of welcome on behalf of the Daughters of the Confederacy. At this time Miss Kate Terry, daughter of Col. William Terry and now Mrs. Self of Midland, Texas pulled ropes which automatically unveiled the statue but at the same time unfurled a large Confederate flag on either side of the statue.  The most enthusiastic outburst was when Mrs. Rex Peel rendered Dixie with the assistance of a band.

This is a panoramic postcard of the dedication of the statue on the Bentonville square.
​Then Senator Berry introduced Major Clifton Breckenridge of Ft. Smith as the orator the unveiling. Mr. Breckenridge was the main speaker for the event and was the son of the vice-president elected in 1856. He was also a former member of Congress and Ambassador of Russia. His father was a Confederate General and Secretary of War in the cabinet of Jefferson Davis. The speaker could not be heard by nearly all the crowd but those fortunate enough to get to hear it enjoyed an excellent speech. Reserved seats just in front of the speaker's stand were for the old veterans. Major Breckenridge delivered a speech outlining the cause of the Rebellion probably deeper than many had heard discussed before. He made it plain  that whatever others might think about the Rebellion or whatever effect the results had on the nation, which was still problematic, the freedom and home: they fought to sustain the Declaration of Independence: that the proof they fought within the constitution was the fact that no southern soldier had ever been tried for treason by the government. He did not blame the north for putting down the Rebellion as a means of self preservation. During the events of the day an American flag was accidently knocked over, which the speaker stopped and restored to its proper place. Mr. Breckenridge said at that point," We tried our best to pull that flag down but couldn't, and by the eternal no one shall else ever shall,"

Several years later a bronze plaque was placed on the memorial honoring James H. Berry. It was unveiled on the first anniversary of his death on  December 30, 1913. It was placed there by the James H. Berry United Daughters of the Confederacy, and Pat Clebourne Camp, Sons of Veterans, both of Bentonville.  Due to inclement weather, the event was held held inside the county courtroom. A tribute was given to James H. Berry as statesmen and a Confederate officer. After the indoor program they went to the statue on the Bentonville square where the tablet was unveiled by four granddaughters of Senator Berry: Miss Berry, Martha Le Flors, Nell Smart, Ruth Dickenson Berry. The tablet was veiled in the confederate colors, surrounded by a wreath of red and white carnations. The plaque read:
James H. Berry
1841 - 1913
Soldier and Statesman
Beloved of Arkansas
Second Lieutenant
Co. E. 16th Ark. Infantry, Confederate States Army
Legislator-Jurist
Governor of Arkansas
United States Senator
He performed every duty
with an eye
single to the public welfare
and his own unblemished honor

This Tablet is placed here
by the James H. Berry Chapter
United Daughters of the Confederacy
the Pat Cleburne Camp
Sons of Confederate Veterans
and other friends
in loving remembrance
and appreciation
of his noble life and character.
​
In 1996, the statue was rededicated on the Bentonville square by then-mayor Terry Black Coberly. At that time it had been nominated for and later placed on the National Register of Historic Places. Mayor Coberly said in her rededication proclamation, "Whereas this monument continues to serve as a centerpiece of the Bentonville square, it stands as a reminder of times long past and for those who fought and paid the supreme sacrifice for their principles."

On August 8, 2008, the city of Bentonville celebrated the centennial of the Confederate monument on the Bentonville square. The event had many different speakers that day including the mayor. At the event, John Scott, superintendent for the Pea Ridge Military Park, stated, "He isn't willing to ignore the Civil War because that would mean forgetting the lives of those who served in Union and Confederate armies." "The monument is to a Confederate soldier, not to the Confederate government,' Scott said. "The average Confederate soldier didn't sign up to defend the institution of slavery, nor did the average Union soldier sign up to abolish slavery." It was estimated that 1,100 to 1,400 Benton County men served in the Confederate army. This statue has stood watch over the Bentonville Square for over 110 years. If you are interested in a little more history on who James H. Berry was, you can check out his biography at ​https://www.vintagebentonville.com/berry-senator-james-h.html 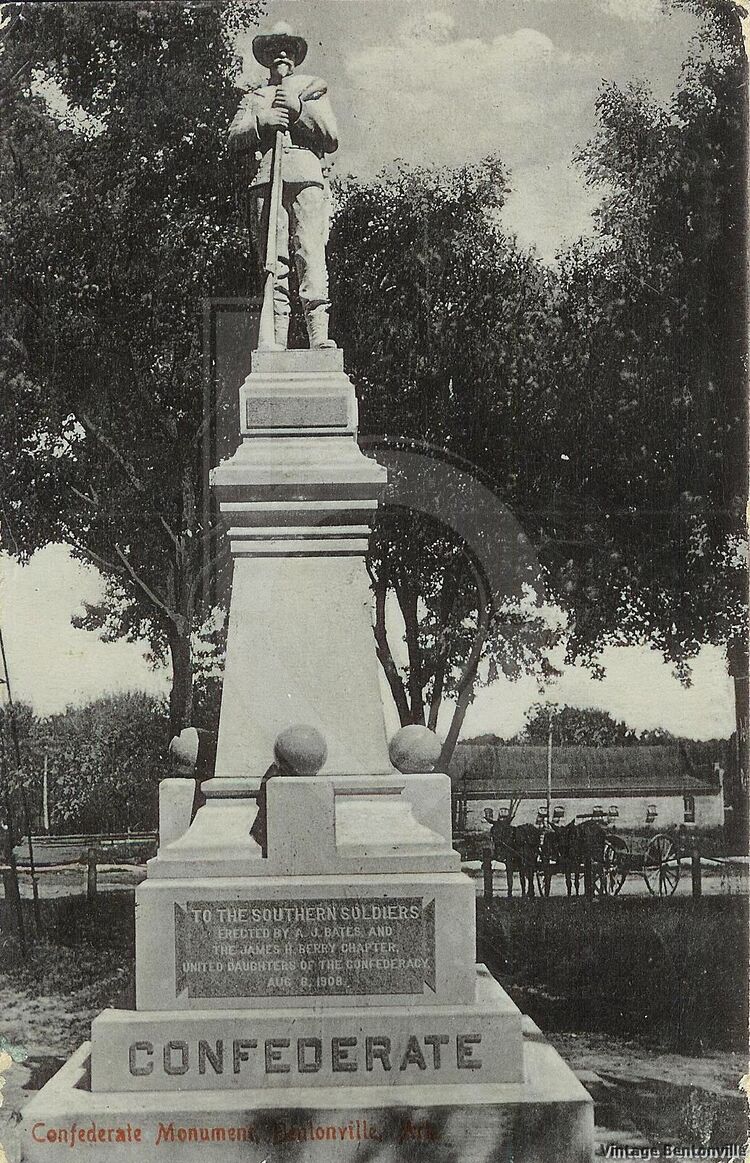 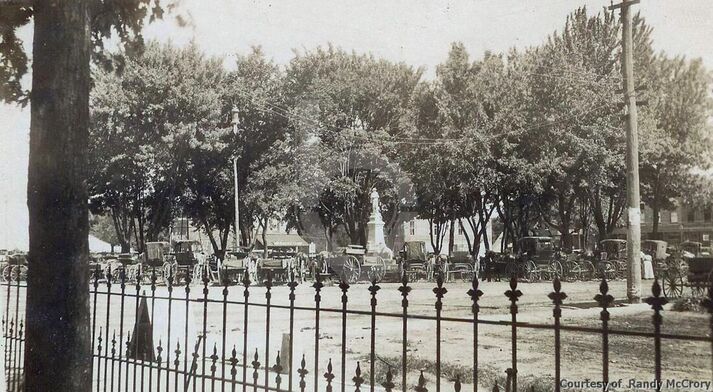