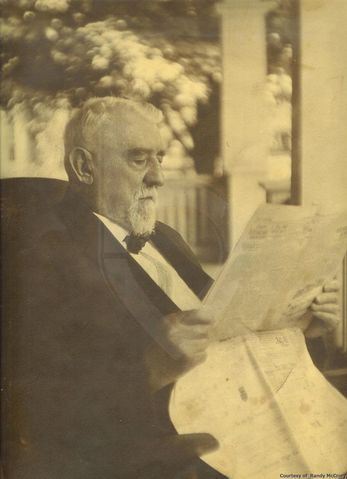 Col. Samuel West Peel is one of the most remembered historical figures in Bentonville. He played a diverse role in what we know as Bentonville today. He was a U.S. Congressman, investor, lawyer, banker, farmer, was an Indian agent for the Five Civilized Tribes in Indian Territory. He was born near Batesville, Arkansas, on September 13, 1831, to John and Elizabeth West Peel, natives of Kentucky, his father being a local farmer and merchant. His mother died when he was four years old and his father moved his three sons and six daughters to Carroll County, Arkansas.
As Mr. Peel grew up he would help his father in his store, and also served as deputy county clerk to his father. He married Mary Emaline Berry on January 30, 1853. Her brother later became governor of Arkansas. In 1858 to 1860 he was elected Carroll County clerk. When the Civil War broke out he hid the county records in a burial vault in the cemetery. He didn’t want to see the county records destroyed by Union forces. In 1861 he enlisted in the confederate army as a private. His fellow soldiers voted to make him a major. He saw action at Wilson Creek, Prairie Grove and Pea Ridge. There were seven brothers, or bothers-in-law of Mr. Peel who served during this time. He was the only one who was not injured. At the end of the war he was serving in Little Rock and held the position as Colonel. After the war was over he promised his wife that some day she would have a mansion like those down in the south. The Peels had nine children, eight of whom survived to adulthood.
When he returned to Carroll County he found his home had been burned. His family had gone without food for many days towards the end of the war. The records he had stored in the burial vault during the war were saved. They were returned to the new log court house. But unfortunately in 1866 a fire broke out and destroyed all the records. During this time Sam Peel started to study law and was admitted to the Bar in 1865. He briefly practiced law in Hindsville before moving to Bentonville in the spring of 1867. He started a law practice there and was joined by his brother-in-law, James Berry, a year later. They maintained a partnership for the next five years. In 1873, he was appointed by the governor at the time to fill a vacant position as prosecuting attorney for the Fourth Circuit court. He was elected to that position in the next election, and serviced as prosecuting attorney until 1876 (another source says 1882). In his first bid for the U. S. Congress, Mr. Peel was defeated. He tried again two years later and was elected and served from 1883 to 1885 representing Arkansas Fourth District. His next term in congress was from 1885 to 1893. He served the Fifth District of Arkansas. He was the first native born congressmen from the state of Arkansas. Sam Peel was very involved with Indian affairs during this time and was the House Chairman for the Committee of Indian Affairs during his time in office. Records show that he would hold tribal council on the front lawn of his house in Bentonville. The Indians leaders would even camp on his property. There were even Indian treaties that were signed on his front lawn. In 1892 he was defeated for reelection and returned to Bentonville to practice law. He set up a partnership in Washington D.C. that specialized in dealing with Indian affairs. He also served as an attorney for the Five Civilized Tribes in Oklahoma (Chickasaw, Choctaw, Cherokee, Creek, and Seminole). By 1890 he had retired as a lawyer but helped in organizing the First State Bank in Bentonville. The bank later became the First National Bank. He served as president of the bank for many years.
On Dec 18th, 1924, Col. Samuel Peel passed away at the age of 93 years old. His wife Mary had passed away about 1896. He was buried in the Bentonville Cemetery.